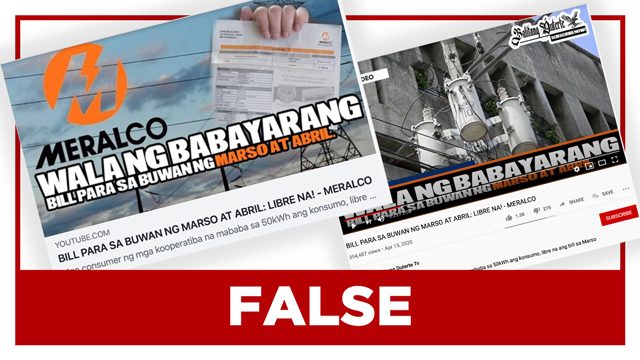 Claim: A YouTube video said that Manila Electric Company (Meralco) billings for March and April 2020 are now free to help consumers affected by the coronavirus crisis.

The video was two minutes and 4 seconds long. When shared on Facebook, the thumbnail photo showed Meralco’s logo and a Meralco bill. The content of the video, however, was only a news clip from television channel UNTV.

As of writing, the video had 394,487 views and the channel had 943 subscribers. Facebook’s monitoring tool Claim Check flagged the video for verification.

The facts: The announcement did not come from Meralco. There is an energy subsidy program amid the coronavirus crisis but it is implemented only by electric cooperatives and not private power distributors like Meralco.

The program, called Pantawid Liwanag, is an initiative of the Philippine Rural Electric Cooperatives Association, Inc. Cabinet Secretary Karlo Nograples announced the program in his press briefing for the inter-agency task force on COVID-19 on April 15.

The National Electrification Administration (NEA) said “lifeline consumers” are those who live below the poverty line and use electricity not exceeding 50 per kilowatt-hour (kWh) during the lockdown period. NEA also clarified that the program does not cover Meralco and other private companies.

“It was clear in both the announcement of Secretary Nograles and our previously published press releases that the Pantawid Liwanag program emanated from and will be implemented by our electric cooperatives, which are non-stock and non-profit power distribution utilities,” NEA said. “Meralco| and other privately-owned power distribution companies are not involved in this.”

To know more about the Pantawid Liwanag program, NEA answered some of the frequently asked questions on its official Facebook page. The electric cooperatives part of the program as of April 18 are listed here.

The news clip from UNTV used by the YouTube channel also did not say that Meralco is waiving its March and April billings. The news report only said that electric cooperative consumers who use below 50 kWh will benefit from the program.

In early April, a similar false claim also circulated that said Meralco and Maynilad Water Services Inc are waiving their billings for March 2020 due to the coronavirus crisis. This was not true, because the two utility services companies were only offering an extension period for payments. – Pauline Macaraeg/Rappler.com