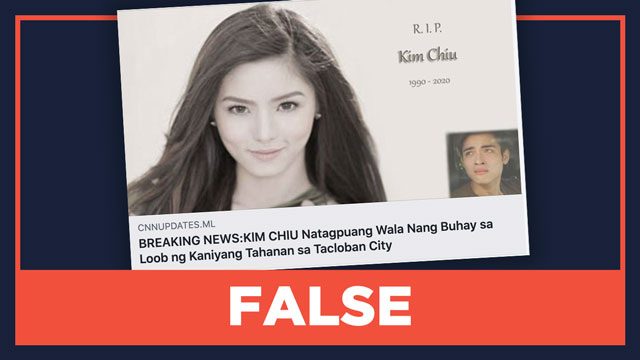 Facebook Twitter Copy URL
Copied
The video containing the claim is edited. There is also no official report of Chiu’s death as of May 18.

Claim: Actress Kim Chiu was found dead in her home in Tacloban, Leyte.

The webpages contained a video of what looked like a news report from GMA News. When clicked, the video stops playing after 3 seconds. A prompt then appears asking the viewers to share the link on their own social media accounts to “uncover” the rest of the video. The links had been reported to Facebook for containing false information at least 23 times as of writing.

The facts: There is no official report of Chiu’s death as of May 18. Cnnupdates.ml is not CNN Philippines’ official website. Both the official channels of CNN Philippines and GMA News have not published reports about it as well.

The video embedded in the webpages also did not contain information about Chiu. It was a clip taken from GMA News’ 24 Oras report in December 2019, which was altered to place over Chiu’s photo. Rappler found the original video, which was about journalist Cesar Apolinario’s death.

The edited video was posted by YouTube channel News Reports. All its uploaded videos last under a minute and are similar to the faked report on Chiu. Recently, Chiu has been criticized online over something she said during an online gathering of ABS-CBN stars. (READ: ‘Love Thy Woman’ cast defends Kim Chiu over viral ‘classroom’ quote)

This is not the first time Rappler debunked a claim from cnnupdates.ml. In March, the website falsely claimed that fake cigarettes that “spread coronavirus” have reached the Philippines. It used the same tactic then where it asked readers to share the link on their accounts before fully playing the embedded videos. – Pauline Macaraeg/Rappler.com