Several pages and accounts on Facebook posted this claim. The earliest post flagged by Claim Check, Facebook’s monitoring tool, was shared on May 7. It was two days after ABS-CBN received the cease and desist order from the National Telecommunications Commission (NTC).

“Iisang channel lang yung nasa 1995 na kontrata nila. Pero nung nagrenew sila nung 2014 dinagdagan nila ng S yung Channel (Their 1995 contract indicated only one channel. But when they filed for a renewal in 2014, they added ‘s’ to make it ‘channels’),” the post read.

(So, in other words, ABS-CBN’s violations include the usage of one frequency for 13 channels that should’ve been for only one. One franchise is for one channel, but ABS-CBN had one franchise and 13 channels.) 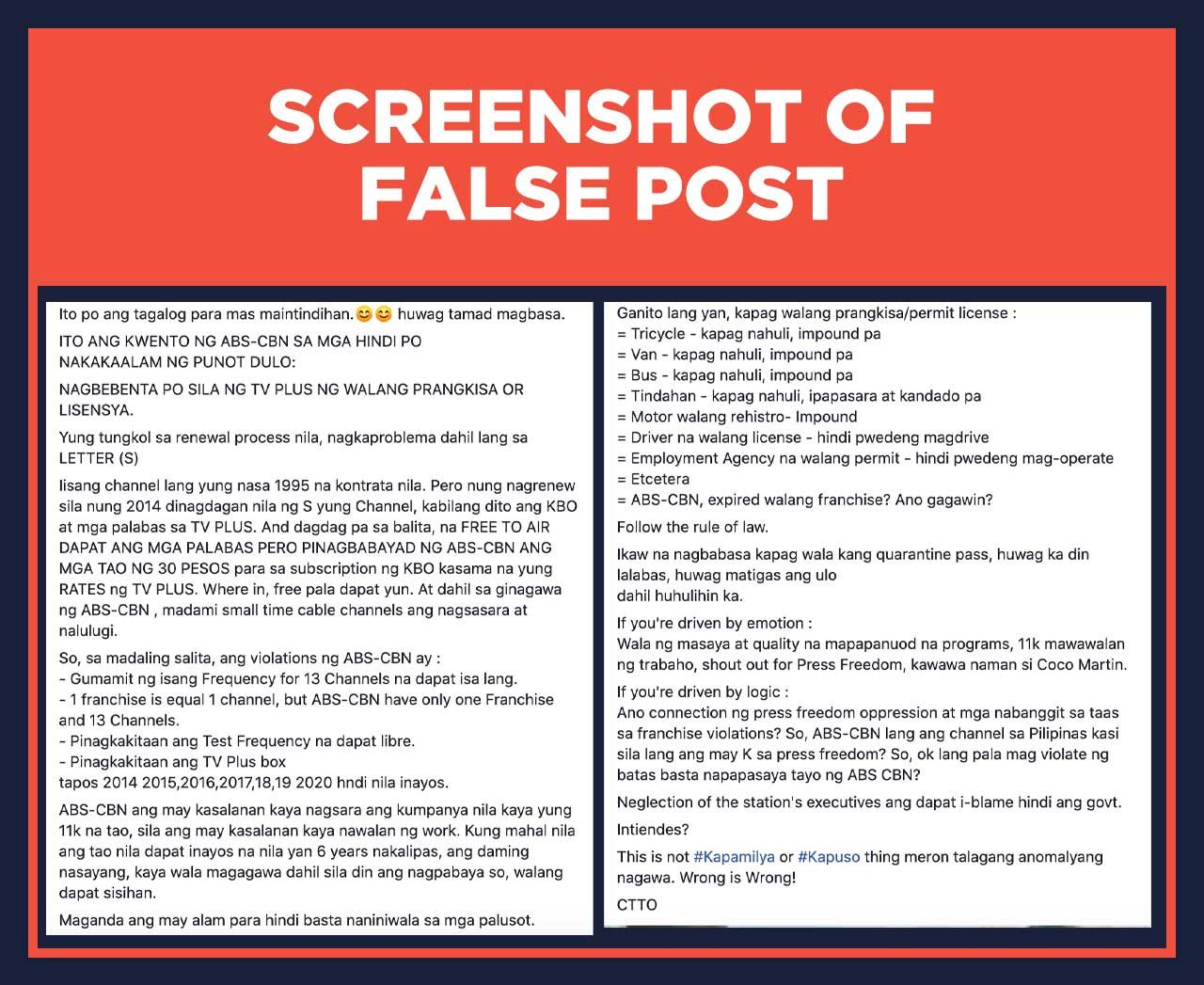 Claim Check flagged at least 5 similar posts for fact checkers to verify. It is still being shared on Facebook by other accounts as of May 26.

The facts: There is nothing stated in Republic Act No. 7966 or ABS-CBN’s 1995 franchise that limits the network to broadcasting only one channel.

Section 3 of the franchise said that ABS-CBN shall secure appropriate permits and licenses from the NTC and shall not use any frequency in the television or radio spectrum without having been authorized by the Commission.

The Philippines is also currently transitioning from analog television system to digital terrestrial television broadcasting, which is led by the Department of Information and Communications Technology. It aims to complete the national switchover to digital by 2023. (READ: EXPLAINER: FICTAP Issues vs ABS-CBN’s franchise renewal)

“To illustrate, broadcasters currently use the assigned 6 MHz TV bandwidth on a defined channel to transmit one analog program in standard definition TV (SDTV) format. Comparatively, in digital technology, broadcast of multiple SDTV programs and/or in high definition TV using the same bandwidth is possible,” the DICT explained in its Digital Terrestrial Television Broadcasting Migration Plan in 2017.

The other issues mentioned in the post, such as ABS-CBN’s TVPlus and the question as to why the company failed to renew the franchise since 2014, were already answered by the company and in the Senate hearing in February. (READ: FALSE: ABS-CBN’s franchise was not renewed because of pay-per-view service)

During the February Senate hearing, ABS-CBN was also cleared of tax, labor, and other legal issues by officials from the Bureau of Internal Revenue, Department of Labor and Employment, Securities and Exchange Commission, and even the NTC itself. – Pauline Macaraeg/Rappler.com

Editor’s note: An earlier version of this story cited a document containing NTC’s channel assignments to ABS-CBN. The channels were for mobile frequencies, not for television. This has been corrected.