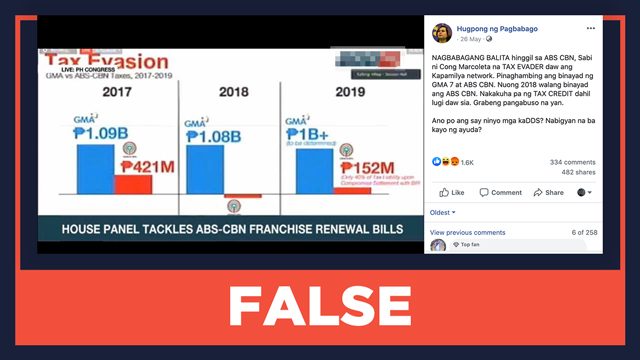 This claim was made by House Deputy Speaker Rodante Marcoleta during the Tuesday, May 26, House hearing on ABS-CBN’s franchise renewal.

He said that the company violated the terms and conditions of its legislative franchise due to “tax avoidance schemes.”

“It used its…subsidiary Big Dipper Digital Content and Design Inc, a PEZA (Philippine Economic Zone Authority) registered company, as tax shield,” he said. “Its main customer is ABS-CBN Hungary and because of this unconscionable tax avoidance scheme, ABS-CBN’s alleged effective tax rate in 2018 was at negative 5%. This means that ABS-CBN managed to avoid paying taxes in 2018.”

The claim and the chart have been circulating on Facebook since May 26, according to data from social media monitoring tool CrowdTangle.

The facts: ABS-CBN Corporation’s 2018 audited financial statement said that they had an effective tax rate of 4% for that year, not negative 5%. The company and its subsidiaries paid their taxes from 2016 to 2019, according to the Bureau of Internal Revenue (BIR).

In their audited financial statement, which is included in their annual report to the Securities and Exchange Commission, auditor SGV & Co reconciled their statutory tax rate, which is 30%, with their effective tax rate, which was 4% for that year.

According to Mon Abrea, founder of the Asian Consulting Group, it would be “impossible” for a corporation to have a negative effective tax rate, as alleged by Marcoleta.

“For obvious reasons, tax credit is not tax avoidance. It’s an advance payment already, meaning it’s been taxed from a different income or other transactions before they declared it,” he said in a mix of English and Filipino.

SGV also noted that Big Dipper’s application to be registered as an IT (Information Technology) ecozone was approved by PEZA on July 14, 2009. The principal activities of Big Dipper listed in the annual report are digital film archiving and central library and content licensing and transmission.

According to PEZA’s website, companies that are engaged in IT service export are eligible for their incentives, which include an income tax holiday (ITH) for 4 to 8 years. Upon expiration of the ITH, registered companies are subjected to a 5% special tax on gross income and are exempted from all national and local taxes.

At a Senate hearing on the network’s compliance with the terms of its franchise held on February 24, the BIR said that the media giant had fully complied with the tax requirements of the government.

“They are regularly filing and paying their taxes for the past number of years,” said Simplicio Cabantac Jr, BIR Large Taxpayers Service head.

He also disclosed that it paid at least P14.398 billion from 2016 to 2019. (READ: Senate hearing on ABS-CBN: No breach of laws, franchise terms) – Vernise L Tantuco/Rappler.com