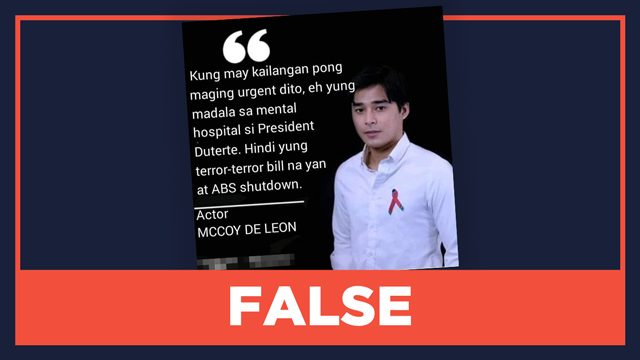 Claim: ABS-CBN actor and dancer McCoy de Leon said President Rodrigo Duterte should be immediately brought to the mental hospital, according to a graphic that circulated on Facebook.

(If there is anything that needs to be urgent, it’s President Duterte being brought to the mental hospital. Not the anti-terror bill and ABS-CBN shutdown.)

The graphic had the logos of ABS-CBN News at the bottom.

Claim Check, Facebook’s monitoring tool, flagged at least 8 separate posts for fact checkers to verify. The graphic was shared on Facebook as early as June 4.

The facts: The graphic did not come from any of ABS-CBN’s official channels. De Leon also denied saying the statement.

In an email to Rappler, ABS-CBN Head of Corporate Communications Kane Choa said: “We did not produce the art card. It did not come from ABS-CBN News.”

De Leon posted an Instagram story on his official account, too, that said the quote card being attributed to him is not true. A fan page of De Leon was able to get a screenshot of his Instagram story before it disappeared. (Instagram stories automatically disappear after 24 hours)

Rappler also reached out to an account that publicly posted the graphic the earliest to ask for its source, but we received no response.

This is not the first time De Leon became a target of disinformation. On June 2, Rappler debunked similar quote cards attributed to De Leon, which contained false statements about Duterte and the ABS-CBN shutdown. – Pauline Macaraeg/Rappler.com