FALSE: Photo of Sarah Elago with new recruits to CPP-NPA 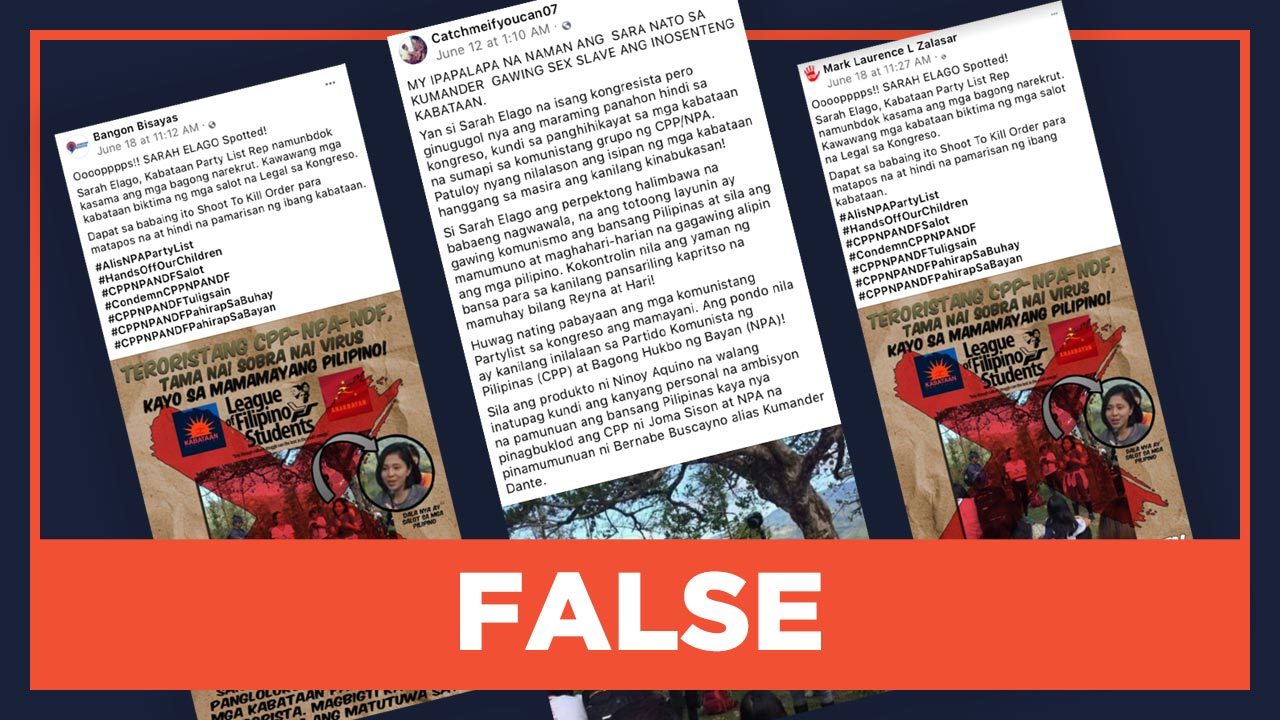 Facebook Twitter Copy URL
Copied
The caption in these posts misrepresent a photo that Kabataan Representative Sarah Elago herself posted from a hike for a cause event in March 2020. Rappler has previously fact checked a misrepresented photo of Elago from the same event.

Claim: Kabataan Representative Sarah Elago was spotted on a mountain with “new recruits” to the Communist Party of the Philippines (CPP) and its armed wing, the New People’s Army (NPA).

(Elago has another batch of innocent youth who will be made sex slaves for the commander. That’s Sarah Elago who is a congresswoman but spends a lot of time not in congress, but in persuading the youth to join the communist groups of CPP/NPA. She continues to poison the minds of the youth until their future is ruined!) These posts were spotted on social media monitoring tool CrowdTangle and on Facebook.

The facts: The caption in these posts misrepresent a photo that Kabataan Representative Sarah Elago herself posted from a hike for a cause event in March 2020. Rappler had previously fact checked another misrepresented photo of Elago from the same event.

The photos were taken during a hike organized by SheDecides Philippines and Trail AdvenTours. The hike was held on March 1 at Mount Binutasan, Tanay, Rizal to help adolescent girls affected by the Taal Volcano eruption.

Elago, who was one of the participants in this hike, posted the photo herself on Instagram on March 1 with the caption, “Today, She Decides, together with Trail Adventours, led ‘SheHikes, so SheDecides,’ a symbolic goal-setting campaign that seeks to provide menstrual and hygiene kits to adolescent girls affected by Taal Volcano eruption.”

Weeks after the event, Rappler spotted and fact-checked posts that falsely claimed that Elago attended the anniversary of the New People’s Army and which also misrepresented one photo that Elago herself posted from the hiking event as proof of the claim.

Bangon Bisayas and Mark Laurence L Zalasar also have a history of posting false claims. Earlier they posted a false quote attributed to Elago, saying children are not their parents’ property and threatening to destroy their future. – Loreben Tuquero/Rappler.com