FALSE: No specific mention of warrantless arrests in the Constitution 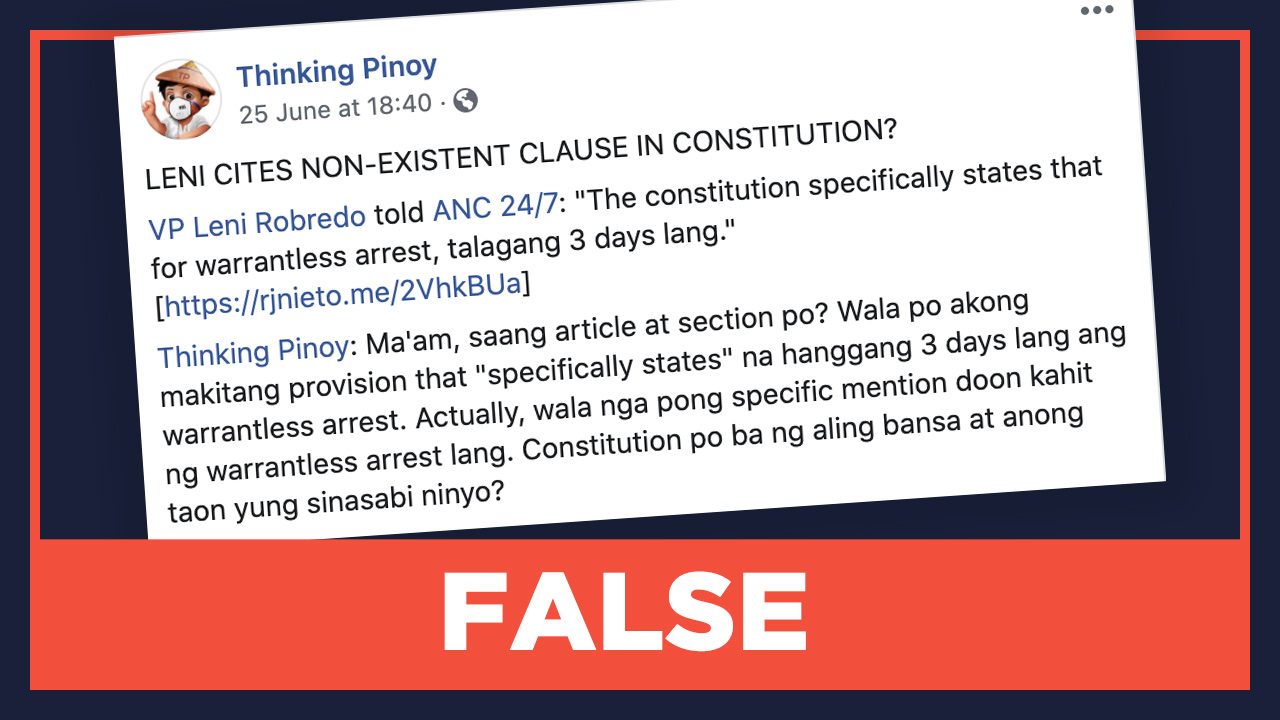 Claim: There is no provision in the 1987 Philippine Constitution that mentions warrantless arrests.

This claim was made in a post by RJ Nieto aka Thinking Pinoy on Facebook on Thursday, June 25.

Nieto was responding to Vice President Leni Robredo, who said that the anti-terror bill is unconstitutional because of a provision that allows authorities to arrest and detain suspects for 14 days without a warrant. This period of detention can be extended to 24 days.

Robredo, also a lawyer, told ANC’s Karen Davila in an interview on June 25: “[Holding suspects without charge for at least two weeks is] against the Constitution. The Constitution specifically states that for warrantless arrest, talagang 3 days lang (it should only be 3 days).”

This post was emailed to Rappler for fact checking and was also flagged as possibly misleading content by Facebook’s fact checking tool Claim Check.

Article III, Section 2 states that people’s right to be secure in their persons, houses, papers, and effects against unreasonable searches and seizures is inviolable. It says, “No search warrant or warrant of arrest shall issue except upon probable cause to be determined personally by the judge after examination under oath or affirmation of the complainant and the witnesses he may produce, and particularly describing the place to be searched and the persons or things to be seized.”

In her conversation with Davila, Robredo was referring to Article VII, Section 18, which says, “During the suspension of the privilege of the writ [of habeas corpus], any person thus arrested or detained shall be judicially charged within three days, otherwise he shall be released.”

According to former Supreme Court spokesperson Ted Te, these two provisions in the Constitution are the reason why Rule 113, Section 5 of the Rules of Court, which deals with lawful warrantless arrests, is interpreted narrowly.

The Integrated Bar of the Philippines (IBP) also asked President Rodrigo Duterte to veto the anti-terror bill’s provisions on non-judicial arrests and the 24-day detention, which they called “unconstitutional.” They cited the same provision in the Constitution as basis.

“[The IBP also focuses on] whether or not the 3-day limit within which an arrested person must be ‘judicially charged’ even if the privilege of the writ of habeas corpus is suspended sets a constitutional limit to preventive detention that is violated by the 14-24 days detention without judicially charging the suspected terrorist allowed in the anti-terror bill,” said IBP national president Domingo “Egon” Cayosa on June 9.

Congress confirmed on June 9 that they had submitted the enrolled version of the anti-terror bill to Malacañang. President Duterte has until July 9 to act on the bill before it lapses into law. – Vernise L Tantuco/Rappler.com