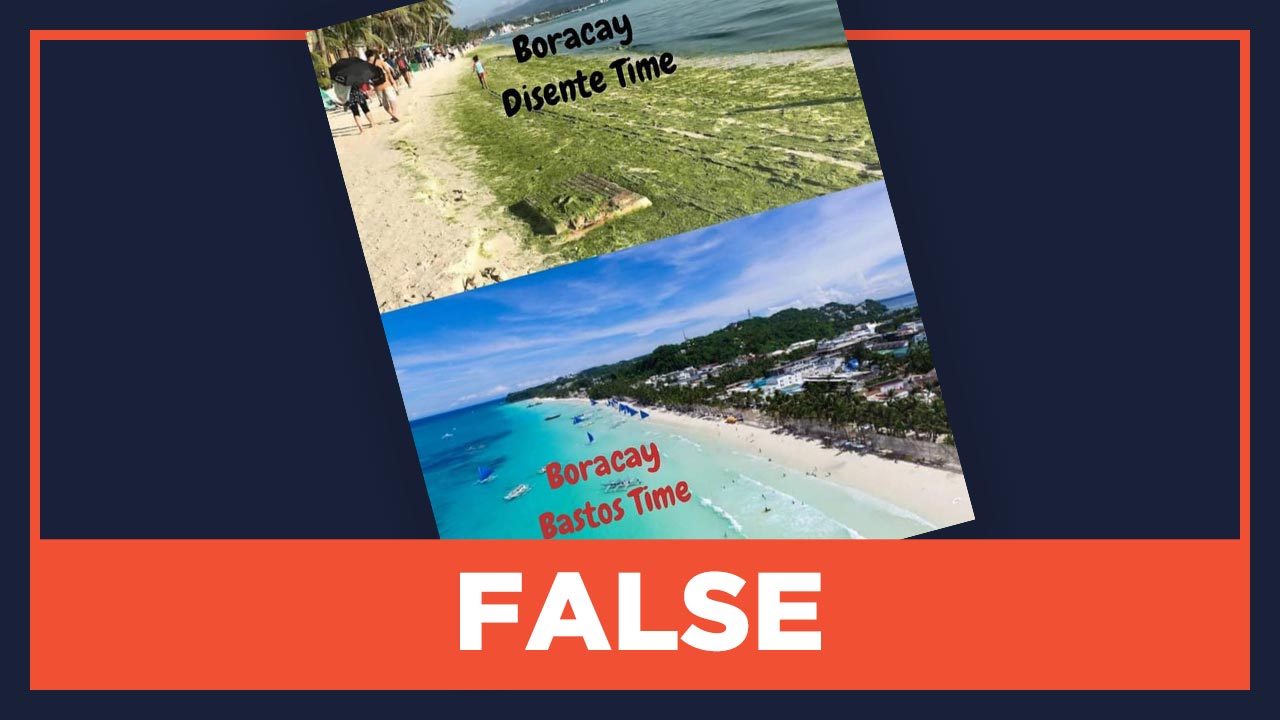 Facebook Twitter Copy URL
Copied
(UPDATED) The 'disente' photo was taken in March 2018, while the 'bastos' photo was a stock photo that has been used in some articles shortly before Boracay's closure in April 2018

Claim: “Before and after” photos of Boracay show the condition of the world-renowned beach during the terms of President Benigno Aquino III and President Rodrigo Duterte.

On or around July 1, a series of graphics showed areas that were known to be filthy. The photos compared what those areas looked like during the Aquino administration, or what it tagged as “disente time” (decent times), with what they looked like during the Duterte administration, or what it tagged as “bastos time” (indecent times).

The graphics argue that things are “better” in the country even if the president is “indecent,” compared to when things are “worse” despite the country having a “decent” leader.

Among these graphics was a comparison of Boracay then and now.

One of the posts has been shared more than 300 times and has received 795 reactions as of writing, according to Facebook’s Claim Check dashboard.

The graphic about Boracay was also shared by Presidential Communications and Operations Office Undersecretary Lorraine Badoy on July 2 on her Facebook account. Her post has been shared more than 1,800 times, and received 3,100 reactions and 225 comments as of writing.

Some users also sent a post with the graphic to the Fact-checking in the Philippines Facebook group for verification. (Editor’s Note: After an internal review following the publication of this story, we changed the rating for this claim from PARTLY FALSE to FALSE.)

The facts: The first photo was taken in 2018, already during the Duterte administration, thus making the comparison in the graphic a false one. Meanwhile, the other is undated, but had been used in some articles in 2018.

The photo of Boracay used to depict the “disente time” or the Aquino administration was taken on March 22, 2018, nearly two years into the Duterte administration.

It was used in an ABS-CBN News article on March 22, 2018, with the headline “‘LaBoracay’ no more? Gov’t agencies recommend cancellation of Boracay Labor Day parties,” published before the 6-month closure of Boracay that started on April 26, as ordered by Duterte.

Meanwhile, the photo of Boracay in “bastos time,” or under the Duterte administration, was a Shutterstock photo uploaded by user smallhorse.

While the Shutterstock photo is undated, the photo has been used in some articles published shortly before Boracay’s closure.

An article by World Travel Magazine on March 12, 2018 contained this specific Shutterstock photo. The Travel Market Report website likewise had the photo in its report about Boracay on April 5, 2018.

The website The Thaiger also used the photo in an article on April 6, 2018 about Boracay’s then-impending closure. (Note that the website uses a European date format, where the day is stated first before the month.) – Rappler.com