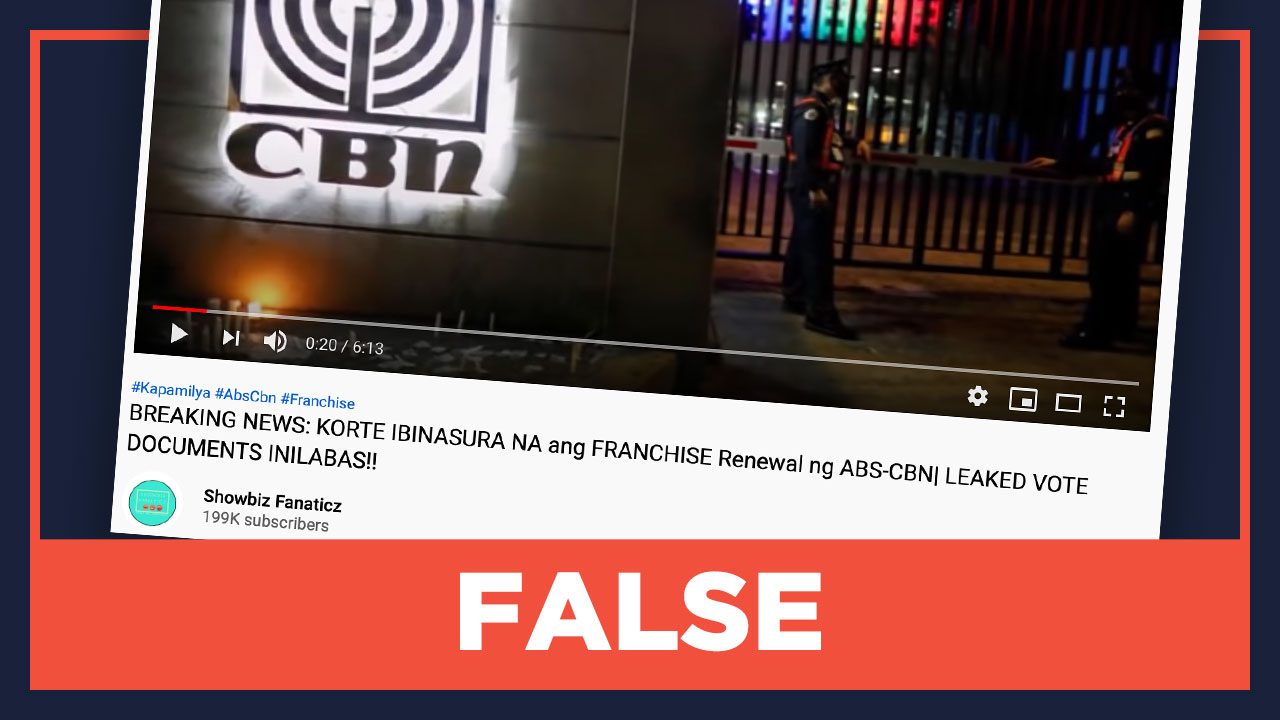 Facebook Twitter Copy URL
Copied
It is Congress, not the Court, that deliberates on franchise renewals. ABS-CBN’s petition also still remains pending before the SC, which will resume deliberations on July 13.

The video lasted 6 minutes and 13 seconds.

Claim Check, Facebook’s monitoring tool, flagged the video for fact checking. It was reported for containing false information at least 9 times. The video has 217,704 views on YouTube as of writing.

Data from social media tool CrowdTangle also showed that the video was shared by 6 Facebook pages and at least 51 times to several Facebook groups.

The facts: It is Congress, not the SC, that deliberates on the renewal of legislative franchises, based on Republic Act No. 7925 or the Public Telecommunications Policy Act.

ABS-CBN’s petition for a temporary restraining order on the National Telecommunications Commission’s (NTC) cease and desist order remains pending before the High Court as of writing. The SC said they will resume deliberations on the petition Monday, July 13.

Moreover, Showbiz Fanaticz’s video did not mention the SC at all. The video’s content only cited a report from the Manila Times that contained alleged leaked documents showing the votes of congressmen on the ABS-CBN franchise renewal issue.

The House of Representatives just wrapped up its hearings on ABS-CBN’s franchise renewal on Thursday, July 9, and is expected to vote on the matter after. No exact date has been scheduled for the voting yet. (READ: Scenarios: What happens to ABS-CBN franchise after House panel vote?)

ABS-CBN went off-air on May 5 after the NTC issued a cease and desist order. On June 30, the NTC also shut down ABS-CBN’s Sky Direct and TV Plus channels. ABS-CBN had earlier said that the company is losing around P30 million to P35 million every day that it is off the air.

It is not the first time YouTube channel Showbiz Fanaticz uploaded a false or misleading video. Rappler has debunked at least two of its other video uploads in the past: one is about Time Magazine honoring President Rodrigo Duterte, and the other is about former Bureau of Internal Revenue chief Kim Henares admitting having a hand in wrongly computing ABS-CBN’s taxes. – Pauline Macaraeg/Rappler.com