MISSING CONTEXT: Bongbong to set up foundation, give away ‘Marcos treasure’ if elected president 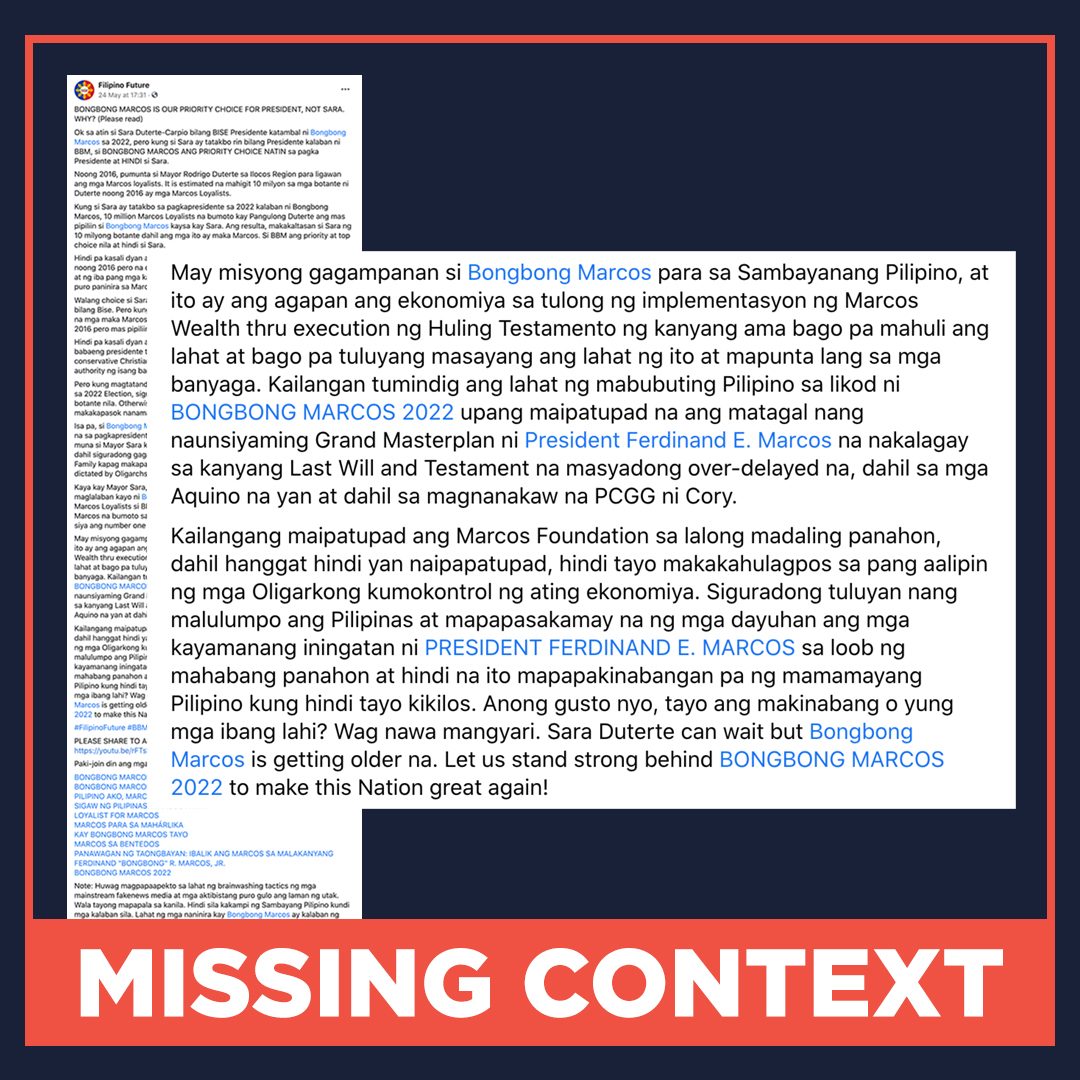 Facebook Twitter Copy URL
Copied
Bongbong Marcos has never publicly committed to using the ‘Marcos Foundation’ to distribute his family’s wealth to the Filipino people. As of June 4, 2021, he has not expressed plans to run for president.

A post on the Facebook page “Filipino Future” endorsing former senator Bongbong Marcos for president in 2022 claims that it’s his “mission” to establish a “Marcos Foundation” to return the “Marcos treasures” to the Filipino people. This post has garnered over 1,900 reactions, 640 comments, and 1,900 shares at the time of writing.

This claim is being used by “Filipino Future” to convince voters to elect Marcos for president over Davao City Mayor Sara Duterte. There are no official candidates for president at the time of writing – the filing of certificates of candidacy will take place in October 2021.

Dictator and former president Ferdinand Marcos did write in his personal diary dated December 31, 1969, that he would “give away” all his “worldly possessions” to the Filipino people through a “Ferdinand E. Marcos Foundation.” He wrote that he would “ask some closest confidants to study the mechanics of this decision.”

In an interview with the Philippine Free Press published on January 31, 1970, Marcos named those confidants: Senate minority leader Juan Ponce Enrile, energy minister Geronimo Velasco, prime minister Cesar Virata, Development Bank of the Philippines chairman Cesar Zalamea, and education minister Onofre D. Corpuz. He did not assign Bongbong or any of his children to carry out the task mentioned.

Bongbong has also never publicly committed to giving his family’s wealth to the Filipino people through the Ferdinand E. Marcos Foundation. There are no interviews, public announcements, or official news reports wherein he speaks about his plans to do so.

The Ferdinand E. Marcos Foundation has been used to establish institutions such as the National Institute of Molecular Biology and Biotechnology in 1979. In 1997, however, a Swiss Court established that the majority of the Marcos foundation assets were of criminal origin.

Contrary to these public gestures, the vast-majority of Marcos family assets returned to the Filipino people have been done so unwillingly. The Presidential Commision of Good Governance (PCGG) has retrieved $3.7 billion since its creation in 1986. Moreover, cases that have been filed against the Marcos family about anomalies during the Philippines’ martial law period, including their ill-gotten wealth, have been a mix of victories and losses for all camps involved.

Rappler has fact-checked a variety of claims regarding the origin of the Marcos family’s wealth, including the following:

Rappler has also written about how social media has been used as a tool by the Marcos family to regain public trust as a means of electing them back into office. Filipino Future has been fact-checked by Rappler multiple times in the past. – Jose Atienza/Rappler.com