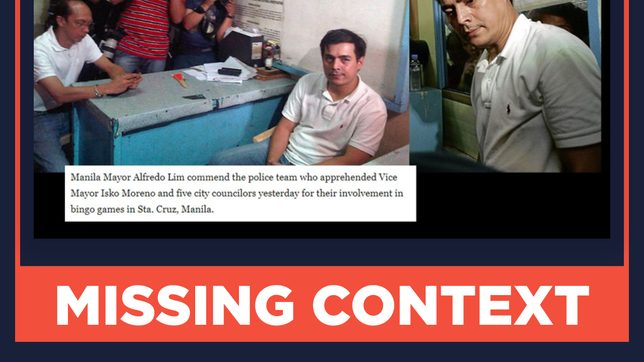 The montage included a screenshot of a 2013 Philippine Daily Inquirer article and two photos of the arrest originally posted by GMA News and ABS-CBN News.

Although Moreno was arrested in 2013 over illegal gambling raps, the Manila City Prosecutor’s Office dismissed these charges due to lack of evidence.

The then-Manila vice mayor and five city councilors were arrested on February 16, 2013, for allegedly sponsoring a bingo game in Sta. Cruz, Manila, without city permits.

Moreno and his fellow defendants said in a counter-affidavit submitted to the justice department that no wager was involved in the bingo games they hosted.

“No wager was involved in the bingo games that was sponsored, it was purely done as a form of ‘parlor games’ for entertainment purposes without any cost to our constitution and that the bingo card was given for free,” the counter-affidavit said.

He was released on February 17, 2013, after the Manila City Prosecutor’s Office dropped the charges due to insufficient evidence.

“According to Chief Fiscal [Elaine] Cerezo, we are being released on the basis of insufficiency in evidence. Sa madaling salita, napatunayan namin na kami ay hindi lumabag sa batas at kulang ang ebidensya,” Moreno said in an interview with DZMM on the day of his release.

(In other words, we’ve proven that we did not violate the law and [the illegal gambling accusations] lack evidence.)