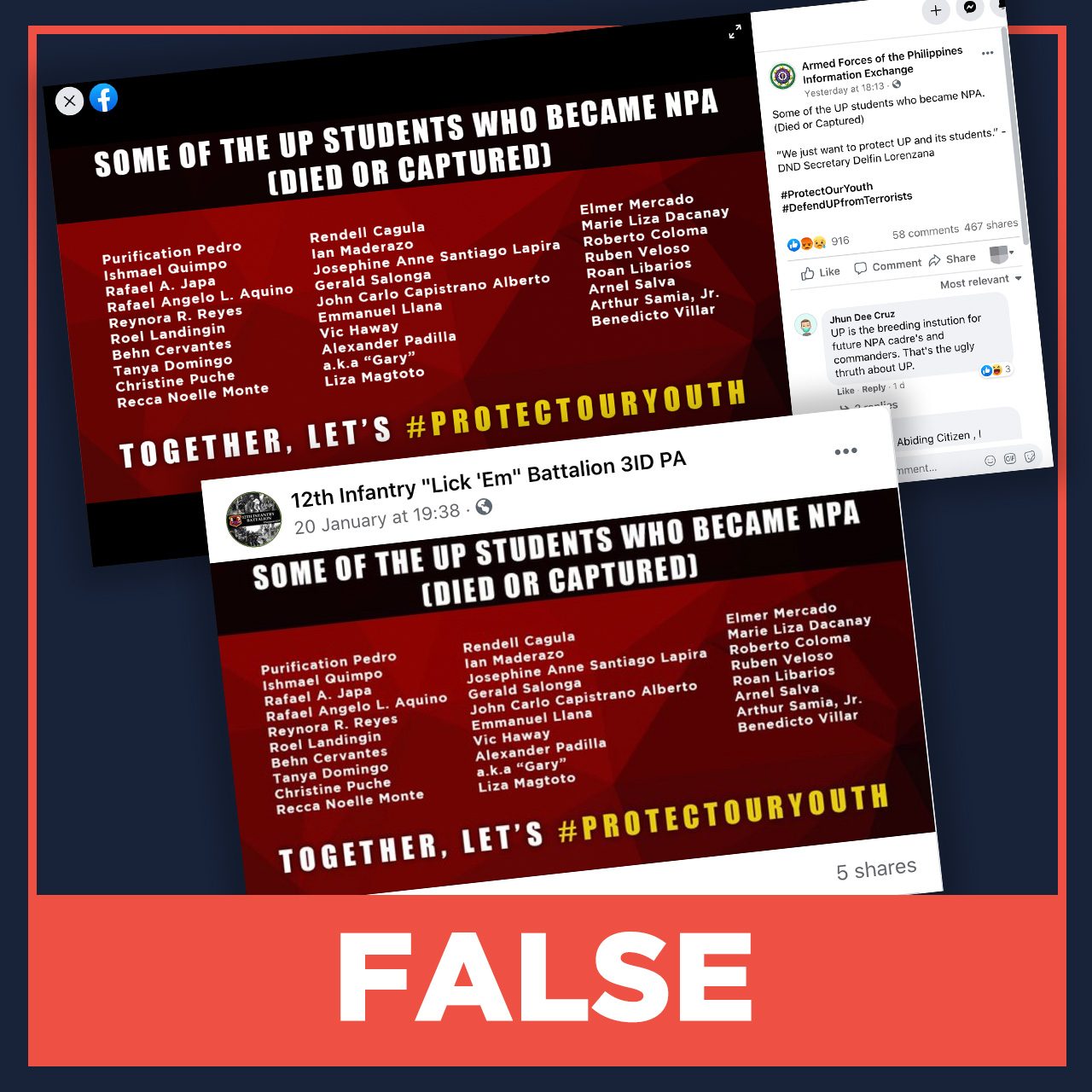 Facebook Twitter Copy URL
Copied
At least 8 of the people on the list are still alive, not captured, and have not been linked to the New People's Army 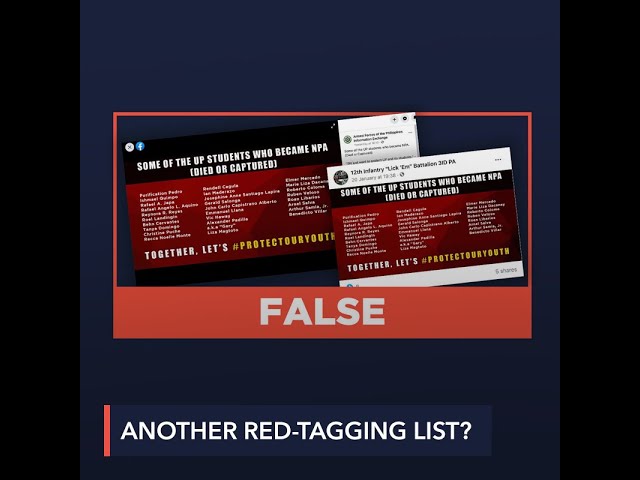 A list on the Facebook page “Armed Forces of the Philippines Information Exchange” names 27 people who are supposedly “UP [University of the Philippines] students who became NPA [New People’s Army] (died or captured).”

The list was posted on Friday evening, January 22, and had at least 916 reactions, 58 comments, and 467 shares before it was taken down on Saturday morning. According to CrowdTangle data, there are at least 12 other Facebook pages that posted the same list on Friday.

At least 8 names on the list are journalists, former government officials, lawyers, teachers, or entertainment personalities who are still alive and have not been captured as members of the NPA. They are the following:

In a text message to Rappler, Landingin said that whoever posted the list should take it down and issue a public apology. “The post is patently false on all counts. I never became an NPA. Neither have I been captured. And I’m very much alive. Truth is, I have been working as an economic and business journalist for more than 3 decades now,” he told Rappler.

“I am appalled and disgusted [at] how government cavalierly plays with the lives of innocent people on that list. As for me, I am not NPA, never been. I have not been jailed or captured, never have. I am not dead, obviously. But I am a proud UP graduate of the College of Law. I have served in government for over twenty years and even served as chair of the government peace panel negotiating with the CPP/NDF/NPA. With these baseless allegations and because of red tagging and the anti terrorism law, I am now anxious for me and for others on the list, whose lives are now placed in peril.”

“I never became an NPA, I was never captured and I’m alive. I’m gravely concerned that an official AFP page is spreading false news. In the context of the unconstitutional provisions of the anti-terror law, I will not take this lightly as we need to make the AFP accountable for actions that are libelous and potentially endangering and wreaking havoc on the lives of individuals like me who are leading peaceful, meaningful lives as responsible citizens and advocates of democracy and sustainable development.”

Dacanay also said that she is consulting her lawyer and organizations she leads on possible responses to the post, including legal action.

Behn Cervantes died on August 13, 2013. He was an artist and activist who founded or was a founding member of the UP Repertory Company and PETA. He directed, acted, and produced plays, musicals, films, and documentaries, and has won numerous awards, grants, fellowships, and scholarships. He is recognized on the Bantayog ng mga Bayani (Monument to the Heroes) memorial as one of the individuals who fought against Martial Law and dictator Ferdinand Marcos from 1972 to 1986.

There are no official reports or proof that these people were ever members of the NPA.

The page “Conservatives of the Philippines” also shared the list, but it does not identify itself as connected to the military. – Vernise Tantuco/Rappler.com