FALSE: Marcoses were not convicted of any charges 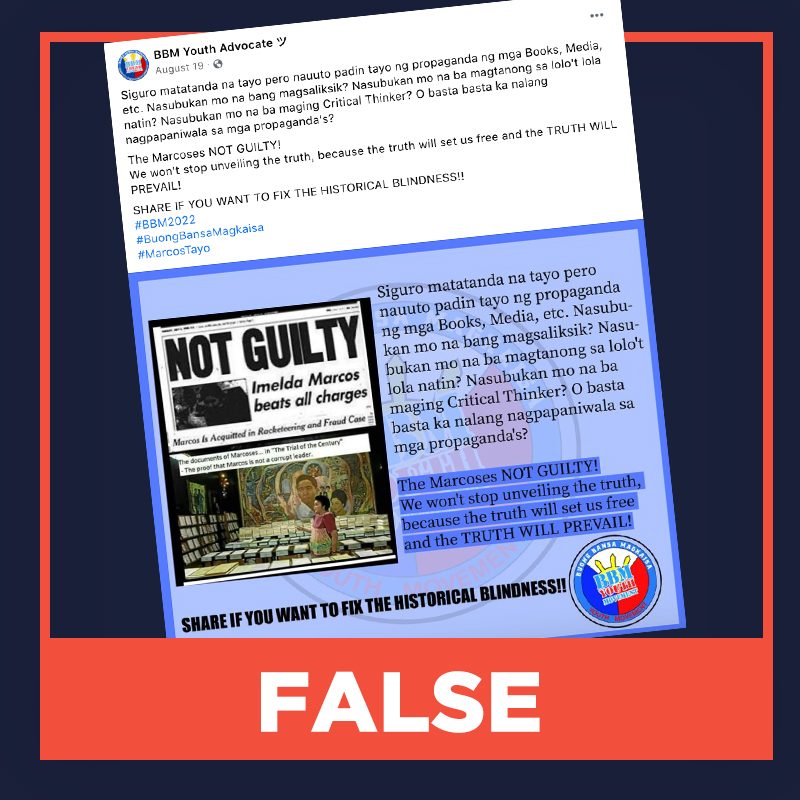 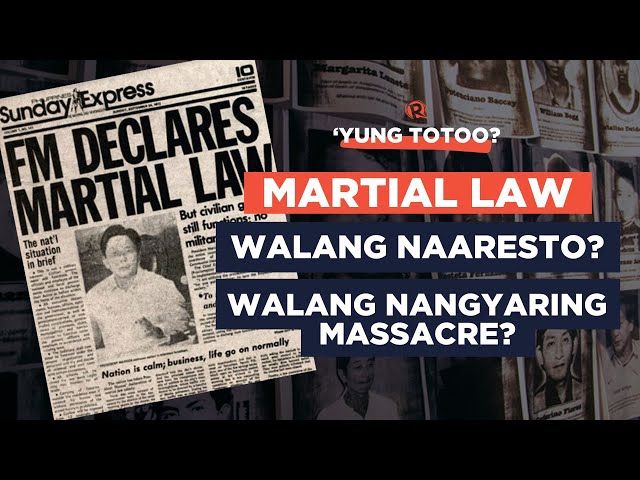 A post by Facebook page BBM Youth Advocate ツ claimed that the late dictator Ferdinand Marcos and his wife Imelda were not found guilty of any charges filed against them.

The page has 54,961 followers as of writing. Its post included a paragraph that reads: “The Marcoses NOT GUILTY! We won’t stop unveiling the truth, because the truth will set us free and the TRUTH WILL PREVAIL!”

A picture of a supposed newspaper clipping was attached to the post. The headlines on the newspaper read: “NOT GUILTY Imelda Marcos beats all charges.” Another clipping contained in the post reads, “Marcos Is Acquitted in Racketeering and Fraud Case.”

An article from The New York Times was published in 1990 contains a similar headline that reads: “The Marcos Verdict; Marcos Is Cleared of All Charges In Racketeering and Fraud Case.” The case was tried at the United States Court House on Foley Square, and the Marcos family was acquitted on charges that they stole $200 million from the Philippine treasury and spent the money in the US.

In September 1993, however, the Sandiganbayan found Imelda Marcos guilty of two counts of graft that involved a lease between the Light Rail Transit Authority and the Philippine General Hospital Foundation Inc. However, the Supreme Court acquitted her in 1998.

Years later in November 2018, the Sandiganbayan found her guilty of 7 counts of graft for illegally creating private organizations in Switzerland while she held various positions as a government official under her husband’s rule. She was ordered to pay P300,000 worth of bail for her 2nd Sandiganbayan conviction, but the court also ruled that she can still enjoy temporary freedom while appealing her conviction.

Courts here and abroad also affirmed that the Marcos family owned illegal assets. In 2014, the Sandiganbayan declared that the “Malacañang Jewelry Collection” was part of the ill-gotten wealth of the Marcoses. The collection was turned over to the Philippine government after the forfeiture of two other jewelry collections previously owned by the Marcos family.

US courts also froze or awarded to the country Ferdinand Marcos’ assets in New York and New Jersey in 1986. In another case in December 1990, the Swiss Federal Supreme Court affirmed that the Marcoses used Swiss banks to hide $356 million while the dictator was in power.

Rappler recently fact-checked another post by the BBM Youth Advocate ツ Facebook page, which falsely claimed that the Philippines had the highest literacy rate in Asia under the Marcos regime.

In the past, Rappler also debunked other posts that claim the Marcos family is not guilty of corruption, including a claim that there is no proof the Marcoses stole billions and another that falsely said the Marcos couple’s wealth did not come from public funds. – Margarita Gonzalez, Loreben Tuquero/Rappler.com