Facebook Twitter Copy URL
Copied
Phivolcs says the photos show a fissure, not an active fault. There is no known active fault mapped in the area of Barangay Calangay, San Nicolas, Batangas. 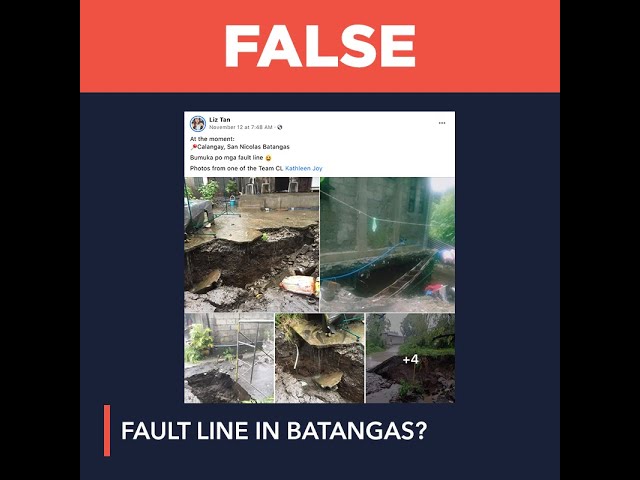 This claim was sent by a Rappler reader for verification. It had acquired 607 reactions, 88 comments, and 2,600 shares as of writing.

The claim is false. The Philippine Institute of Volcanology and Seismology (Phivolcs) said the feature shown is a fissure, not a fault, and that there are no known active faults mapped in the area.

“The feature that appeared in Barangay Calangay, San Nicolas is a fissure that was aggravated by subsurface erosion. Fissures are not active faults and there [is] no known active fault mapped in the area,” said Dr Arturo Daag, Chief of Phivolcs’ Geology, Geophysics Research and Development Division, in an email to Rappler.

The United States Geological Survey (USGS) defines a fault as a fracture or zone of fractures between two blocks of rock, which allows the blocks to move relative to each other. Faults may extend up to the surface or may be completely buried. A fault line is where the fault cuts the Earth’s surface.

The USGS said that “many faults are entirely beneath the surface and do not reach ground level,” and thus have no fault lines.

“These fissures are the result of magma intrusion beneath Taal Volcano in form of a dike that causes these fissures. It has been recorded in the 1911 eruption that these fissures extend to the mainland. Likewise, these were extensively manifested during the January 2020 eruption in the NE-SW (northeast-southwest) directions. Subsurface water erosion along these fissures may occur and when the cavity is large enough that it cannot support the surface, it may eventually collapse,” Daag added.