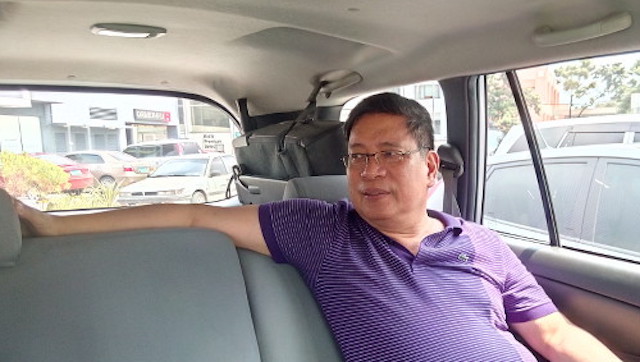 MANILA, Philippines – Security became a primary concern for former Iglesia ni Cristo (INC) minister Isaias Samson after he was expelled for confirming the claims of corruption within their church.

This prompted him to hide, grant very few media interviews, and avoid the public.

He was scheduled to face a Quezon City court on Wednesday, September 16, for a preliminary investigation in relation to the libel case filed against him by INC leaders – making him more worried about his safety.

In an exclusive interview with Samson on Tuesday, September 15, a day before his scheduled court appearance, he revealed how his life was put in danger after escaping house arrest.

He earlier revealed that his family was barred by INC officials from leaving their townhouse in Tandang Sora, Quezon City from July 16 until their escape early morning of July 23.

“We’re being chased [right after escaping]. Everywhere we go, we’re being followed,” he alleged, saying that a ranking police official is behind this.

This prompted him to constantly change location and contact numbers, which, he said, is very difficult. This was in anticipation of “hitmen” sent to follow and monitor them. Fortunately, he said, he knows who they are.

His situation has also surfaced a number of supporters – both INC and non-INC followers – who are extending help in various ways.

“This is where I realized that there still are some who are very concerned, and are very understanding of what we’ve been doing,” he said.

Samson admitted feeling nervous about his Wednesday appearance in court, especially after receiving initial reports about what the INC was allegedly planning to do for the day.

“From what I heard, they will mobilize SCAN [or Society of Communicators and Networkers] members and ministry students to go to the court… But I don’t know what they’re planning to do there,” Samson revealed.

It didn’t help that the court is just a few kilometers away from Central, the main headquarters of INC along Commonwealth Avenue, he added.

Samson said he is also worried about the Quezon City police, whom he suspects to be controlled by the INC.

“If they’re planning anything bad, then so be it,” he said.

This court appearance is Samson’s most recent public appearance, following his press conference on July 23 when he revealed his alleged abduction. Then on July 24, the INC filed the libel complaint against him – the same day INC spokesperson Edwil Zabala confirmed they had expelled him.

Other INC ministers were reportedly abducted, but Zabala denied the reports and claimed that no hostage-taking happened.

The Inquirer earlier reported that Samson claimed he was “taken” because he opposed Santos. He said that decrees by Santos and other church officials, including those concerning members’ funds, were met by protests from some ministers.

Samson pointed out to Rappler that Santos is indeed the main cause of all the controversies surrounding INC.

He cited a case where Santos made changes in the church leadership, particularly in the US, where he installed his son – lawyer Glicerio IV – despite the supposed absence of a license to practice there.

“Ministers are being changed at times, which is just fine. But his purpose for doing so is not good. He already delved into everything,” he said.

Rappler earlier reported about the footprints of Santos and his family that appear to be all over local corporations and foundations of INC. (READ: Glicerio Santos Jr’s clout and control in the INC)

Zabala has denied allegations of corruption within INC, and even dared critics to file charges against them.

“The Church will face the allegations at the proper time and if there is evidence being presented,” Zabala said in an earlier interview.

INC recently claimed “victory” over its critics as members gathered and staged protests at the Department of Justice (DOJ) in Padre Faura, Manila on August 27, then on EDSA from August 28 to 31.

The road inconveniences these rallies caused enraged most commuters, motorists, and netizens.

Samson clarified that despite the negative image that the INC has been getting lately, it’s not an entirely bad institution.

“Most of our brothers/sisters are still keen to serve the Lord despite having doubts about the corruption issues within. They’re aware that those are wrongdoings of but a few people in position,” he said.

He also expressed hope that INC will become a reformed church after all the issues are resolved.

“I believe that after all this, once Iglesia comes out clean, it’ll be a stronger church,” Samson said.

Zabala told Rappler in a phone interview on August 11 that the remaining INC members are still loyal to the church and are very united.