What has happened to the Arroyo plunder case?

Jan 22, 2016 1:15 PM PHT
Facebook Twitter Copy URL
Copied
Oral arguments set for January have been set aside to make way for the Poe disqualification case. Does the entry of veteran lawyer Estelito Mendoza make a difference? 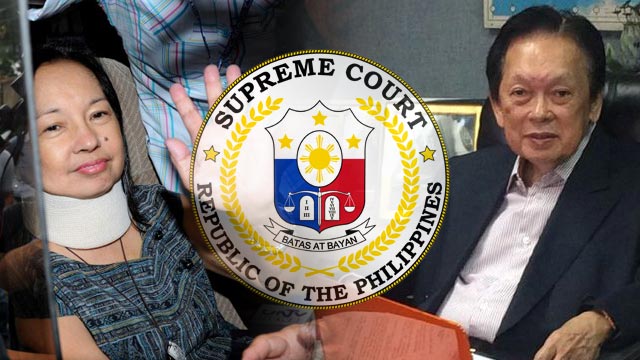 While she had a grand entrance to Malacañang, her exit was marred by allegations of corruption.

She eventually shared Estrada’s fate after being charged with plunder. The Sandiganbayan ordered her arrest in October 2012 – the same month she filed her reelection bid as Pampanga representative – for her involvement in the alleged misuse of P366-million Philippine Charity Sweepstakes Office (PCSO) intelligence funds from 2008 to 2010.

Since then, she has been in hospital detention at the Veterans Memorial Medical Center (VMMC) in Quezon City.

Her case, however, was elevated to the Supreme Court in 2015. How will this impact on her the case?

Arroyo was allowed to go on holiday break – she was allowed to spend Christmas and New Year with her family in their La Vista residence, and the SC suspended her plunder trial.

The SC decision was in response to the petition filed by the Arroyo camp, which claimed that the anti-graft court’s denial in August 2014 of Arroyo’s demurrer to evidence – which will waive her right to present evidence – violated the Philippine plunder law.

“If one does not amass, accumulate [and acquire], there is no plunder,” Arroyo counsel Estelito Mendoza said, arguing that Arroyo only authorized the release of funds; and that there was no evidence presented that proves she took home a peso from the PCSO fund.

The Arroyo camp first asked the SC in October 2012 to stop the ongoing plunder trial against her before the Sandiganbayan and to dismiss the plunder charges filed against her by the Ombudsman. Nothing happened to this petition.

Estelito Mendoza to the rescue

The case went up to the High Court via Mendoza, who became Arroyo’s counsel only recently.

In a text message to Rappler, prosecutor Gidget Duque explained that Mendoza wasn’t part of the Arroyo team when the case was still with the Sandiganbayan.

“Mendoza entered as counsel for Arroyo only with the Supreme Court, when he filed the petition for certiorari questioning the denial by the Sandiganbayan of Arroyo’s demurrer to evidence in October 2015,” she said.

In his petition, Mendoza explained to the SC that the Sandiganbayan “created” a new version of the law in deciding to continue with the plunder case against Arroyo.

Mendoza, a former solicitor general and justice minister, had successfully helped Arroyo in a previous case that involved the questionable sale of a lot near the old Iloilo airport during her administration.

Apart from his former government positions, Mendoza also became famous for winning major public-interest cases in the past, which involved “high-profile clients unpopular in Philippine society.”

The most recent client in Mendoza’s roster of successfully-handled cases is detained senator Juan Ponce Enrile, who was granted bail on humanitarian grounds.(READ: Behind the SC decision on Enrile’s bail)

The Department of Justice expressed concern that the decision could set a dangerous precedent, as it could be used by others currently detained over non-bailable offenses, Arroyo in particular.

Rappler editor at large Marites Vitug explained in an Inside Track item that Mendoza had access to inside information on the High Court. In her book, Hour Before Dawn: The Fall and Uncertain Rise of the Philippine Supreme Court, she said, “In one case where Bersamin was justice in charge, he knew about the Court’s reorganization and what division Bersamin was moving to. Mendoza appeared to have a line to him.”

She added that his winning streak in the High Court can be explained “by his skills, his personal network, and the clients he takes on: they belong to the uppermost crust of our society, wealthy, powerful, and well-connected.”

Not only does counsel Mendoza have the connections, but so does his client Arroyo. In fact, a majority of the sitting justices – 9 out of 15 were her appointees:

Oral arguments on this case were set last year for January 2016, but Supreme Court insiders said the High Court had to prioritize the disqualification case against Senator Grace Poe who is running for president in the May elections.

If the SC reverses the Sandiganbayan’s denial of Arroyo’s demurrer to evidence, she will be acquitted of plunder. How and when the SC will decide on the Mendoza-led petition for Arroyo is being awaited. – Rappler.com