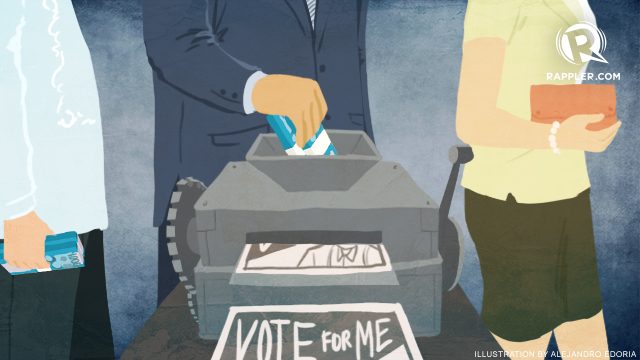 Facebook Twitter Copy URL
Copied
Philippine laws prohibit corporations from making campaign donations. However, the practice continues, with both corporation and candidate having little or no fear of consequences.

MANILA, Philippines – If laws are not followed, then what’s the point?

Under Philippine laws, corporations are prohibited from donating, in any way, to candidates and political parties. A quick look at the 2010 and 2013 Statements of Contributions and Expenditures (SOCE) of past candidates reveals that several campaigns have been fueled by corporations. We’re not talking centavos, but millions of pesos.

Of all the 2016 presidential candidates, Senator Grace Poe has the most colorful history with corporate donors.

Incidentally, TAPE Inc president Antonio Tuviera donated P37.9 million to Tito Sotto’s 2010 senatorial campaign. This was the biggest individual contribution given to a senatorial candidate that year. (READ: Who funds your senator’s campaigns?)

In February 2016, Poe admitted that San Miguel Corporation and Helitrend Corporation either lend or rent out jets for her 2016 campaign sorties.

Corporate donations are in violation of two separate laws: the Corporation Code and the Omnibus Election Code, which were implemented in 1980 and 1985, respectively.

“[N]o corporation, domestic or foreign, shall give donations in aid of any political party or candidate or for purposes of partisan political activity.” – Corporation Code

Poe, however, is not alone.

For his 2013 senatorial bid, Juan Edgardo “Sonny” Angara listed 4 corporations in his SOCE:

Sea & Sierra Vista Inc invites scrutiny as it was charged with tax evasion by the Bureau of Internal Revenue (BIR) in February.

The BIR filed a criminal complaint against its corporate officers, including Angara’s sister, Alexandra Leia Angara, the corporate treasurer.

In 2013, its deficit was P11.93 million, which is roughly the same amount it donated to Enrile in April of that year.

Meanwhile, Aquilino “Koko” Pimentel III takes the cake for having the most number of corporate donors. In 2013, he received around P23.3 million from 11 corporations mostly involved in goods distributions and logistics services. In 2010, Senator Juan Ponce Enrile received a P636,000-donation from Arowai IT Solutions Inc, which was born from a partnership with the Enrile-owned JAKA Group in 2008.

In total, Enrile sourced around 52.5% of his total contributions from corporations.

In Pacific Royal’s latest SEC financial statement acquired by Rappler, it showed that its net income as of 2011 was only P81.84 million.

This begs the question: how could it donate an amount more than its income?

Here are other candidates who received contributions from corporations:

As of 2016, Legarda’s corporate donor, Phil Asia, is a registered contractor for the Department of Public Works and Highways (DPWH). In March 2013, Phil Asia won a bid for a DPWH road project in Cebu City, amounting to P4.8 million.

Under the Omnibus Election Code, “contractors or sub-contractors that supply the government with goods or services, or perform construction or other works” are prohibited from making campaign donations.

This is aside from the fact that corporate donors, in the first place, are not allowed.

In 2013, Legarda received P10 million from JALCO even though it only had an income of less than P1 million in 2012, the PCIJ reported.

Legarda also received P440,774 worth of “bonus ads” from GMA Network Inc as seen in her SOCE.

“As per the office of Commissioner Lim, GMA already disowned the alleged donation. They said they did not donate bonus ads,” Vergara told Rappler.

Fisherfolk groups like Pamalakaya are questioning the amended Fisheries Code, saying it caters not to the interest of small fishers but only to those of big fishing firms like Frabelle.

In 2009, Escudero warned that overfishing could harm the tuna industry.

As of March 2016, a month after the start of the official campaign period, only ABS-CBN and Solar have submitted their ad contracts to the Comelec. At the same time, not all candidates have turned in their information.

As of mid-March, only senatorial bet Francis Tolentino has listed a corporate donor, Patriot Freedom Inc, which paid for his ABS-CBN ads worth P15.9 million.

These campaign donation violations still happened despite the creation of the Commission on Elections’ (Comelec) Campaign Finance Office (CFO) in 2012, which was intended to “increase the Comelec’s ability to enforce election laws on campaign spending and donations.”

In addition, the Securities and Exchange Commission (SEC) ruled in 2015 that corporate donors are prohibited in both the Omnibius Election Code and the Corporation Code.

“[I]f we are to harmonize and give effect to both laws, it is prudent to uphold the absolute prohibition on donations to any candidate or political party or for purposes of partisan political activity by any and all corporations.”

As for the 2016 elections, candidates are required to submit their SOCEs only a month after the election. So there is no way of knowing the full list of their funders for now.

Media companies, however, are supposed to turn in their advertising contracts within 5 days after signing.

Ad contracts list down who funded the candidates’ media ads.

With corporations spewing millions of pesos with such ease, like they were just pouring milk, advocates cannot help but ask: What do corporations expect in return? – Rappler.com