Facebook Twitter Copy URL
Copied
Money transfer services of PhilRem were used in the $81-million money laundering scam, keeping the stolen funds out of sight and out of reach

MANILA, Philippines – It’s a little known money transfer firm founded in 1998 that declared a measly net income of  P373,951.62 in 2014. But it enjoys a vast network that made it profit – in a snap – P10.47 million just from the transactions linked to the $81 million stolen funds from Bangladesh Bank.

The laundering of the stolen funds from the account of Bangladesh Bank in New York will not be possible without the money transfers from a registered remittance company PhilRem Service Corporation via a legitimate bank, the Rizal Commercial Banking Corporation (RCBC).

The services of PhilRem were used in an elaborately planned bank heist by unknown money launderers to move the stolen funds around in the Philippines, keeping it out of sight and out of reach.

Senators investigating the scam have found the testimonies of PhilRem executives – the husband-and-wife tandem of Michael and Salud Bautista – to be either inconsistent or wanting. Hearing resumes today (WATCH: Live: Senate hearing on bank heist)

It doesn’t help that the firm has declined RCBC’s request to waive bank secrecy so the bank could disclose all its accounts and facilitate the probe.

Although PhilRem’s owners denied any knowledge of the money laundering scheme, Bangko Sentral ng Pilipinas Deputy Governor Nestor Espenilla Jr. said there may be basis to cite them for violating the Anti-Money Laundering Act (AMLA) laws.

PhilRem president Salud Reyes Bautista said in a Senate hearing that her firm was assured by RCBC – its partner for several years – on the validity of the transactions. (READ: Network: Who’s who in the RCBC money-laundering scam)

“We relied on the representation of the bank, that it had already undertaken face-to-face contact and customer identification requirements. The bank then assured us that these transactions were valid and that there were no irregularities,” Bautista said.

But for Espenilla, PhilRem, as a third party, should have secured certification from RCBC that it knows the customers of the transactions.

Bangladesh Bank had also rejected an offer of PhilRem to return P10 million from its profits as an apology over the hacked $81 million from the central bank reserves that landed in the Philippines.

This is “not just as a sign of apology, but as symbol of a Filipino company willing to find justice,” Bautista said.

At the end of the fourth Senate probe last week, Senator Sergio Osmeña III even concluded that the $17 million of the laundered money could still be with PhilRem.

This was after the Senate blue ribbon committee caught the PhilRem owners contradicting their earlier testimonies on their transactions linked to the Bangladesh Bank fund heist.

PhilRem owners also declined RCBC’s request to waive bank secrecy and open their bank accounts to give light to the probe.

“[PhilRem] played an important role. It was the one that exchanged the stolen funds into Philippine pesos and distributed the funds to the junket operators then casinos,” Osmeña said.

According to the senator, the lax implementation of AMLA laws provides opportunities for money launderers to exploit the country.

“The law allows leniency. PhilRem should be one of the focus of the next Senate hearing,” Osmeña said on the sidelines of the fourth probe last week. 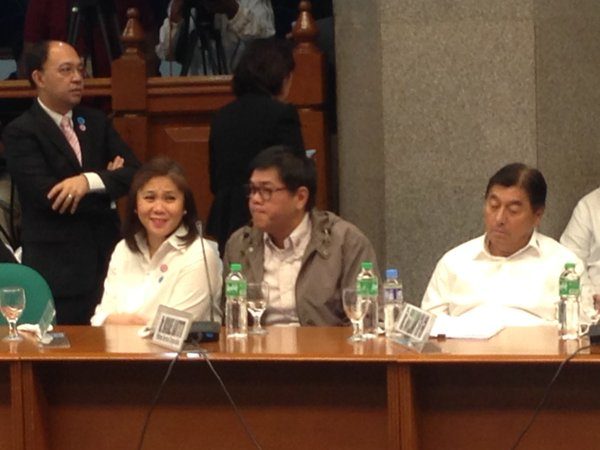 PhilRem is a domestic corporation incorporated and registered with the Securities and Exchange Commission (SEC) on September 24,1998.

Its first office was in London, set up by Suharto Reyes, elder brother of PhilRem president Salud “Sheba” Reyes Bautista.

The company is primarily established to engage in the business of remittance of money currency from abroad to be delivered to different parts of the Philippines.

A look at the latest financial statement filed before the SEC showed that PhilRem has a net income of P373,951.62 in 2014.

Its gross profit amounted in 2014 amounted to P11.81 million, while its operating expenses totaled P8.89 million.

This data showed that the profit PhilRem said it gained from the transactions related to Bangladesh Bank fund heist is much larger than the net income it gained in 2014.

The president of PhilRem told Philippine senators that it profited P10.47 million from transactions linked to the heist.

This is much heftier than the money transfer’s net income of P373,951.62 in 2014, yet the transactions did not raise concerns to PhilRem. 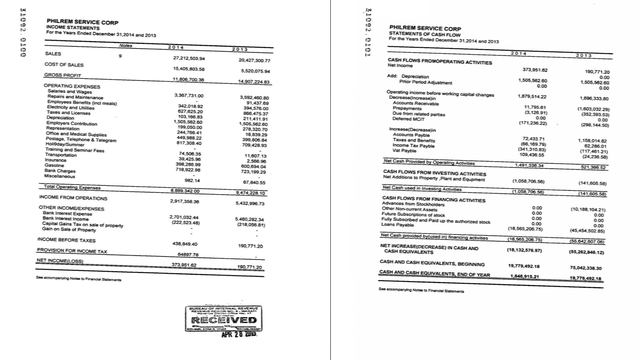 Its 2015 financial data was not filed before the SEC yet.

Transactions not made in PhilRem office

According to its SEC documents, the principal office of PhilRem is located at Unit 401 Cityland III Esteban corner Herrera Street in Legaspi Village Makati.

But transactions linked to the heist were made in Bautista’s residence in Greenhills, San Juan.

“During the 2nd, 3rd, 4th, and 5th time, the money was picked up by Xu in our house,” Bautista told the Senate in Filipino.

According to the SEC papers, the incorporators of PhilRem, aside from Salud, are Michael S. Bautista, Francisco Alido Jr, Romeo Monton, and Norlito Palmares.

Bautista, Reyes, and Palmares are also listed as officials/directors of the company. The president of PhilRem claimed that her firm has been transacting with RCBC for “3 to 5 years” already.

It may, however, be more personal for the Bautistas.

The treasurer of PhilRem and the husband of Salud, Michael “Concon” Bautista, is said to be a close friend of Jerome Tan, who served as president of RCBC Securities until his death in 2012 at the age of 47. (READ: RCBC money-laundering scam mirrors sins of the past)

Bautista was with Tan when the incident happened in Subic, Zambales.

Kam Sin “Kim” Wong, president and general manager of Eastern Hawaii Leisure Company, admitted he has known Michael Bautista of PhilRem “for quite a while” already.

During the Senate hearings, Wong even called Michael Bautista by his nickname “Concon.”

For Michael Bautista, Wong is just an acquaintance and even denied his allegations that $17 million of the stolen funds is still with his firm.

He told the Senate that his 18-year-old company has a “flawless, spotless” reputation, which he said all that the company has.

“We’ve accepted that this transaction is a mistake but we are not keeping any money,” Bautista told the Senate.

Outside the banking industry, the Bautistas are also closely associated with Vice President Jejomar Binay. Michael Bautista’s father, Noel Bautista, runs NJ Bautista Construction, a favored contractor of the Binays which has cornered big projects in Makati. (READ: Network: Who’s who in the RCBC money-laundering scam)

According to Osmeña, the Senate blue ribbon committee remains open to the possibility that PhilRem is part of the money laundering scam.

“Money transfers are primary tools of money launderers to move funds around… These can conceal the illicit origins of the funds or just place the laundered money where the launderers need them,” Osmeña said.

In the case of the Bangladesh Bank fund heist, gambling in casinos is the way of the money launderers to legalize the funds.

It was in early February when the $81-million stolen money from Bangladesh Bank’s account with the Federal Reserve Bank of New York was deposited into fictitious accounts with RCBC.

From the fake accounts, the stolen funds were converted into untraceable gambling chips in Solaire Resort and Casino as well as Midas Hotel and Casino.

It was into these casinos that PhilRem moved about $63 million of the stolen funds, delivering most of it in cold cash. — with a report from Jodesz Gavilan/Rappler.com