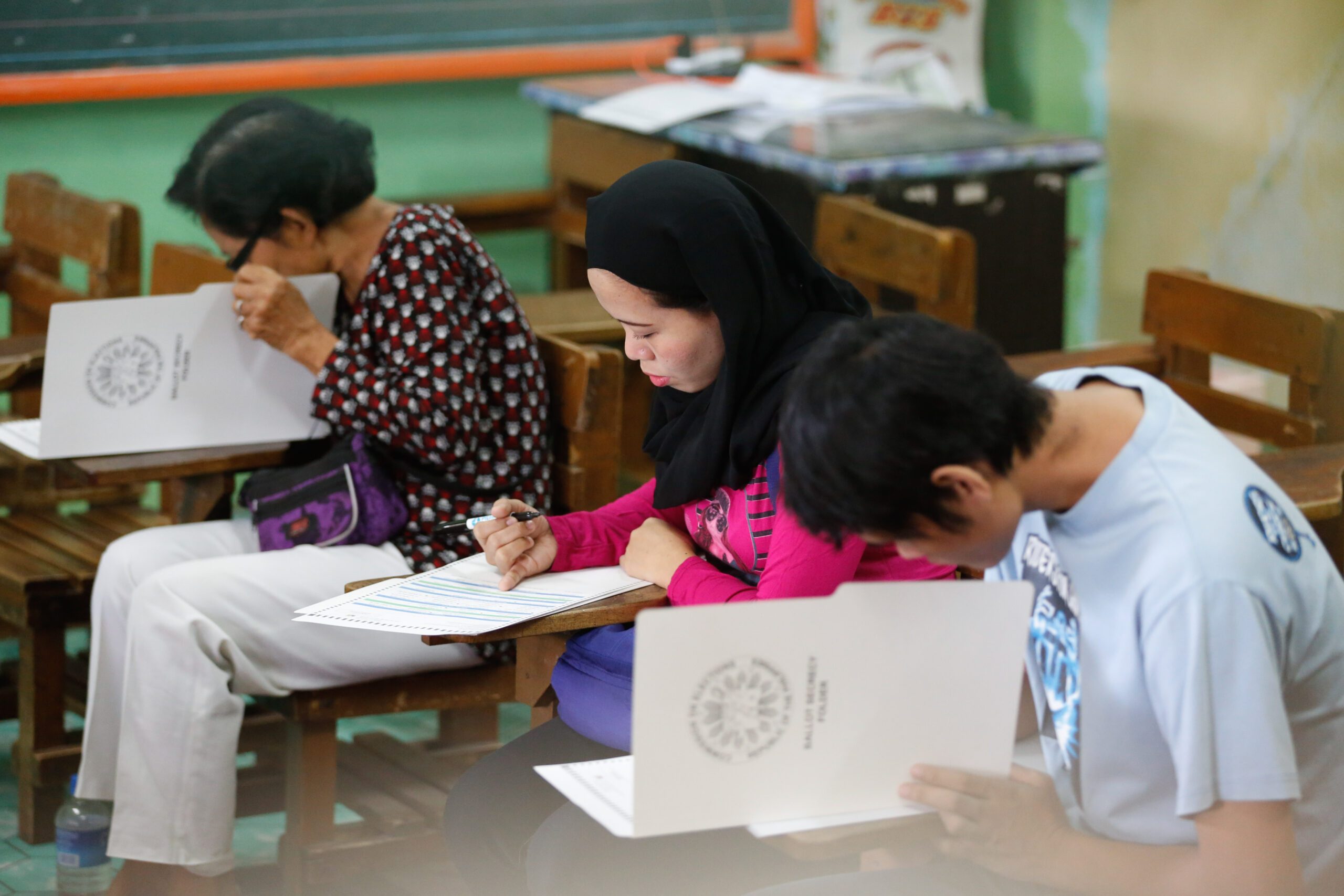 MANILA, Philippines – It’s a good thing when polling precincts post high voter turnout rates on election day. This means many voters want their voices heard in the choice of the country’s next set of leaders.

But it’s a different matter when turnout rates in some precincts are unusually high, or even at 100%. Some might view it as an excellent indicator of civic engagement, but it also raises the possibility of poll cheating.

To help make sense of this, Rappler scrutinized the data from the Transparency Server of the Commission on Elections (Comelec) covering the last two automated elections.

It is important to note, however, that in 2010, only 90% of election returns (ER) from vote-counting machines (VCM) were transmitted to the Transparency Server. In 2013, that rate dropped further to 76%. (READ: How does the PH automated election system work?)

In 2010, all voters registered in at least 43 clustered precincts (or precincts grouped together by the Comelec to meet the required number of voters per voting machine) in 7 provinces trooped to the polls. There were a combined 20,079 registered voters in these precincts.

Of the 7 provinces that registered a 100% voter turnout, 4 are in the Autonomous Region in Muslim Mindanao (ARMM). The other provinces are Kalinga (in 4 towns), Lanao del Norte (in two towns), and Samar (in one town).

The trend was repeated in at least 7 towns in 2013. Among these towns, it was only in Sultan Naga Dimaporo in Lanao del Norte that the number of “perfect attendance” precincts decreased – from 12 in 2010 to 5 in 2013.

All in all, 25,649 registered voters turned up in these precincts that reported a 100% voter turnout. Two senatorial candidates –  Juan “Jack” Ponce Enrile and Juan Miguel “Migz” Zubiri – made it to the Top 12 in these precincts but lost in the 2013 national count. (READ: Enrile, Zubiri win in precincts with 100% turnout)

The number of registered voters in these precincts might seem insignificant, but in 2007, Zubiri’s vote lead of 21,519 caused him to secure the 12th and last spot in the senatorial winning circle based on the final Comelec canvass. A protest filed by senatorial candidate Aquilino “Koko” Pimentel before the Senate Electoral Tribunal (SET) prompted a recount which led to Pimentel’s proclamation as the real winner by over 200,000 votes. (Zubiri resigned days before the SET ruling.)

Percentages above 90% indicate a wide disparity from the national average of 75% voter turnout that same year.

Over 25% of clustered precincts reported a voter turnout of 80%-84%, which approximated the national average.

In the same year, nearly 30% of these precincts reported an 80%-84% turnout, also close to the national average of 77% that year. 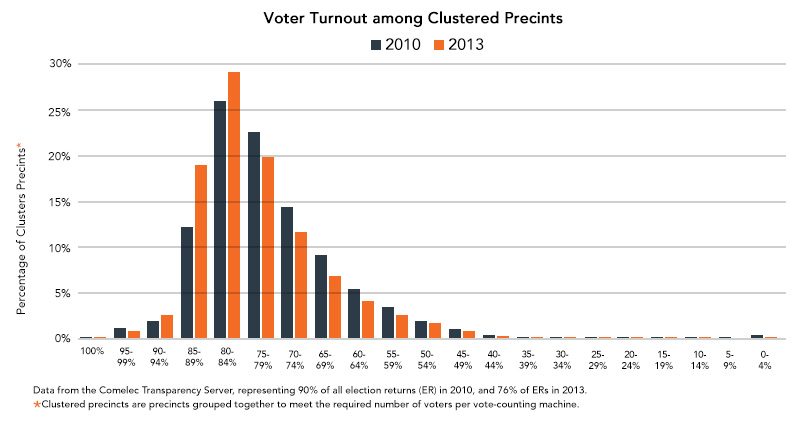 Lawyer Rona Caritos of the Legal Network for Truthful Elections (Lente) cited possible reasons for this unusual turnout in past elections.

“Either ballot-tampering had happened in the local treasurer’s office while the ballots were being kept there, or there was pre-shading of ballots on election day,” Caritos said.

This practice was already prevalent even before elections were automated here. In 2007, Carolyn Arguillas of MindaNews reported that only a few voters turned up in some precincts in Maguindanao, but the province’s election supervisor announced a “remarkable” turnout. The poll official who made the announcement? Lintang Bedol, implicated in poll fraud in 2004 and 2007.

Caritos added that in areas of concern like the ARMM, members of the Board of Election Inspectors (BEI) deployed there on election day were soldiers – due to lingering unrest in the region. As such, they were not adequately trained to man the polling precincts.

Some politicians there may also have taken advantage of this situation, Caritos said, by sending “voters” corresponding to the actual number of registered voters in precincts.

Plus, since the voters’ biometrics database was not yet complete in 2010 and 2013, “there was no way of checking their identity, because there were no voters’ pictures yet,” said Caritos.

The mandatory biometrics law was passed in February 2013, only a few months before that year’s elections, and will be applied for the first time in the 2016 polls. Voters are required to have their photograph, fingerprints, and signature captured during the registration period before they could vote.

Alvia pointed out lapses in the registration process in past elections that contributed to unusually high voter turnouts. These include leniency in accepting proofs of identification and cases of multiple registration by “ghost” voters to pad the voters’ list.

But even with poll automation and biometrics in 2016, Alvia argued there are still issues in the process, specifically with the Automated Fingerprint Identification System (AFIS), which stores fingerprints and finds duplicates.

He said that the AFIS does not screen underage voters, who could “easily get any supporting document” to say that they are of age.

Alvia likewise recounted first-hand experiences of some Namfrel interns in 2014 who were first-time registrants but were “screened out” in some barangays.

“Of the 5 or 6 interns, only one had a smooth-sailing registration. The rest were pulled aside and asked a lot of questions,” said Alvia, to the point that it “left a bad taste to the would-be voters.”

Besides registration issues, he also attributed extremely high turnouts to election day incidents like the hakot system where people are taken en masse to “fill up” a polling precinct and “capture” a precinct to commit election fraud.

“When the automated election system was introduced, we were thinking that it’s a ‘silver bullet’ that could solve years of prevalent election fraud. But actually, it spawned and shifted fraud to various means and areas,” Alvia said.

However, he cautioned against quickly concluding that high voter turnout equals cheating, as intense local politics in some areas could also increase voter participation.

These findings and reports bolster the need for vigilant poll watching on election day, so that more eyes can monitor the election process.

To prevent cheating in high-turnout precincts, Caritos suggested that soldiers and other substitute BEIs be trained not just to run the elections, but also to observe voter fraud occurrence.

There should be a high presence and vigilance of poll watchers in all precincts, too, she added.

She also said that the treasurer’s office in towns with a history of very-high-turnout precincts be placed under Comelec control, instead of under the local governments, to prevent tampering of ballots.

Alvia added that the BEIs should be stricter and more stringent in checking the identity of voters before giving them ballots on election day.

Because even with voters’ biometrics information, Alvia said that some of the mechanisms to make use of those data on election day are not yet available.

For instance, the Comelec opened in February 2015 public bidding for a voter verification system (VVS) that would scan voters’ fingerprints on polling precincts. But its procurement was eventually cancelled in June of the same year.

Nonetheless, both he and Caritos think that biometrics should matter in the 2016 polls.

“This is the acid test right now for that much-vaunted biometrics,” said Alvia. “Let’s see how effective it is.”

“This 2016 elections, we are more hopeful that with mandatory biometrics, all of us would somehow be able to verify voters’ identities before voting,” added Caritos. – with Wayne Manuel/Rappler.com