Vice presidential candidate and Senator Antonio Trillanes IV revealed that Duterte has at least P227 million in a bank account in Manila which he didn’t declare in his Statement of Assets, Liabilities, and Net Worth (SALN).

In his 2015 SALN, which was submitted weeks before the elections, he declared he has a net worth of P23.72 million. The biggest chunk of his assets is “cash on hand/bank”, worth P14.84 million – more than the amount of his combined real properties valued at P4.49 million.

But Trillanes’ allegations could belie this.

In an Inquirer report, Trillanes claimed that Duterte and daughter Sara held joint accounts at the Bank of the Philippine Islands (BPI) branches on Julia Vargas Avenue in Pasig City and EDSA Greenhills, and at the Banco de Oro Unibank-1 in Davao City.

Transactions amounting to P2.41 billion were supposedly found under these accounts from 2006 to 2015.

Rappler checked the SALNs filed by Duterte during these periods and found these figures, all far from the billion amount claimed by Trillanes:

Trillanes claimed that by 2014, the BPI Julia Vargas accounts had P227.41 million – far from the P13.85 million he declared in his SALN. Duterte’s spokesman earlier denied the existence of this bank account.

Also, from 2006 to 2015, Duterte acquired 5 real properties – 4 purchased and 1 ‘exchanged’ – with a total acquisition cost of P3.2 million. Two are agricultural lots, while the rest are residential properties.

Duterte placed 4 of these properties under the name of his daughter, Veronica Duterte, who is a minor. A note was placed below the list, saying that the properties were “purchased through the exclusive funds of the mother, Cielito S. Avanceña.”

According to a PCIJ report, Duterte’s latest wealth declaration registered a 2,519% increase – “or a phenomenal growth rate of 132.6 percent on average per year, over the last 19 years.”

Where he got the money

As mayor, Duterte’s monthly pay is pegged at Salary Grade 30 – equivalent to P78,946. That’s less than a million for one year.

He has businesses, though, as stated in his SALN. Under “business interests”, he declared that he is an incorporator of two entities: Honda Cars in General Santos City since 1997, and Poeng Yue Foundation in Davao City since 2012.

Based on the 2014 financial statements of these entities, their income/revenue is not considerable. For Honda Cars, for example, costs and expenditures exceeded the sales of the company. 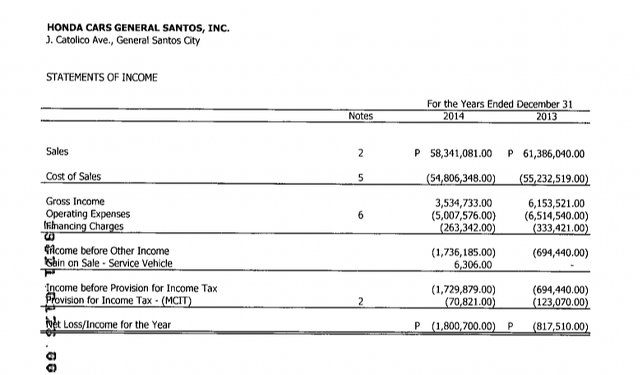 Meanwhile, for Poeng Yue Foundation – which listed Duterte as corporate secretary and member of the board of directors in 2014 – a fund balance of P763,489.56 remained by December of that same year.

The foundation recorded a revenue of P7.67 million from donations and contributions – with Duterte himself contributing P450,000.

In both entities, Duterte’s co-incorporators include Samuel Uy, who provided a loan to Duterte based on his 2013 to 2015 SALNs.

Republic Act 6713 specifies that public officials are prohibited from employment outside the government or from engaging in private practice. But section 7 of the law states: “Public officials and employees during their incumbency shall not:  (1) Own, control, manage or accept employment as officer, employee, consultant, counsel, broker, agent, trustee or nominee in any private enterprise regulated, supervised or licensed by their office unless expressly allowed by law; …”

Honday City General Santos holds office outside Davao City and is not under Duterte’s jurisdiction. Meanwhile, foundations like Poeng Yue Foundation are not covered by this rule.

His earnings in all these endeavors aren’t specified and detailed in his SALNs.

In a late-night television show, Duterte said most of his properties were given to him as gifts.

Duterte admitted that his good friend Pastor Apollo Quiboloy gave him 3 properties in Woodridge Park in Ma-a, and 1 property in Royal Pines in Matina. He also admitted receiving a Nissan Safari and Ford Expedition years ago.

His latest SALN shows he actually has 3 lots in Ma-a acquired from 1997 to 1998, and that he has some properties in Matina. But most of these properties are labeled “purchased”, and one property is labeled “exchanged” in his SALN.

Based on the government’s guidelines in filling out SALN forms, donated properties should still be declared.

“In the case of properties received gratuitously, e.g. donation or inheritance, no acquisition cost shall be declared. However, the fair market value and the assessed value of said properties as found in the tax declaration thereof must be declared,” according to the guidelines.

In 2015, Duterte acquired additional property – a P1-million-worth house and lot in Barangay Matina. This raised the number of Duterte’s real properties to 14 in his latest wealth declaration.

One of the 4 properties identified to be in Barangay Matina could be the Ecoland Subdivision house.

But there is no mention of any residence outside Davao City. Duterte’s past SALNs didn’t indicate any property outside his home city, either.

Rappler also obtained Sara Duterte’s 2010 and 2011 SALNs, and found one property outside Davao – a condominium unit in Quezon City. But no San Juan City property is specified.

If Trillanes’ accusations are found to be true, Duterte will be liable for misdeclaration of his SALN – an offense that led to the impeachment of former Supreme Court Chief Justice Renato Corona.

A public official who is found to have misdeclared any asset may be dismissed from government service.

Duterte’s camp has said their presidential bet is contemplating the filing of libel charges against Trillanes for allegedly fabricating information. – with research by Gerard Lim/Rappler.com