May 20, 2016 11:05 AM PHT
Pia Ranada
Facebook Twitter Copy URL
Copied
What was it like growing up with the next president of the Philippines? His younger sister, Jocellyn Duterte, shares their story. 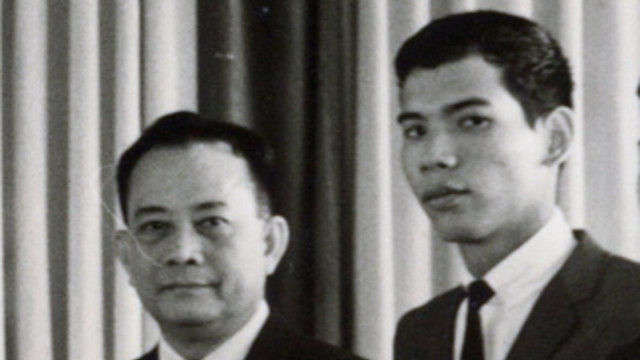 DAVAO CITY, Philippines – “Malay mo (You never know), some day I will become mayor,” Rodrigo Duterte would sometimes muse when he and his younger sister Jocellyn talked about politics as teenagers.

Cellyn, as the president-elect calls her, would join the laughter after “Manong Rody’s” words. To her, it was incredulous that any of her siblings would want a life in politics, given how hard it was for all of them, growing up as children of the governor of a then undivided Davao.

But Rody would not only become Davao City mayor for one term, he would get elected to the post 7 times. Having never lost an election, he would cap his winning streak with victory in the 2016 presidential elections. He is now days away from being proclaimed the 16th president of the Philippines – the first from Mindanao.

Cellyn or Jo, as she is known to most in Davao City, can only laugh about her memories growing up with a future president.

At 68, Jo is 3 years younger than Rody. He has 3 other siblings: Eleanore, the eldest; Emmanuel or BlueBoy; and Benjamin or Bong.

Davaoeños are familiar with Jo’s spats with the mayor. Her strong personality is evident in her steely eyes, confident bearing, and authoritative manner of speaking.

In the mayor’s character, you will see the toughness of the mother. But his heart, his acts of kindness – that, I think, comes from my dad.

A political science major, she is a more articulate speaker than her brother. In fact, she had wanted to be a lawyer but their mother dissuaded her because at the time “it was expected of a girl that she marries first,” says Jo.

Both with a rebellious nature, Jo and Rody would lock horns while growing up. Rody was a “mama’s boy” while Jo was close to their father, Vicente.

Jo remembers their family life in Davao City best since she was only a baby when the Dutertes lived in Maasin, Southern Leyte, Rody’s birthplace. (READ: 22 things to know about ‘Duterte Harry’)

For the siblings, life was defined by their parents’ involvement in public service. After moving his family to Davao City in 1951, Vicente began his career as a provincial secretary. He ran and won as Davao governor and served for several terms.

Vicente was known for his pro-poor programs. Jo remembers long lines of people visiting their house from 8 am to 5 pm.

“The house was an open house. I would wake up in the morning, nakapila na ‘yung mga taong humihingi ng trabaho o may namatayan o kailangan ng ganoon (people were lined up asking for a job, or someone in their family died, they need this and that),” says Jo. 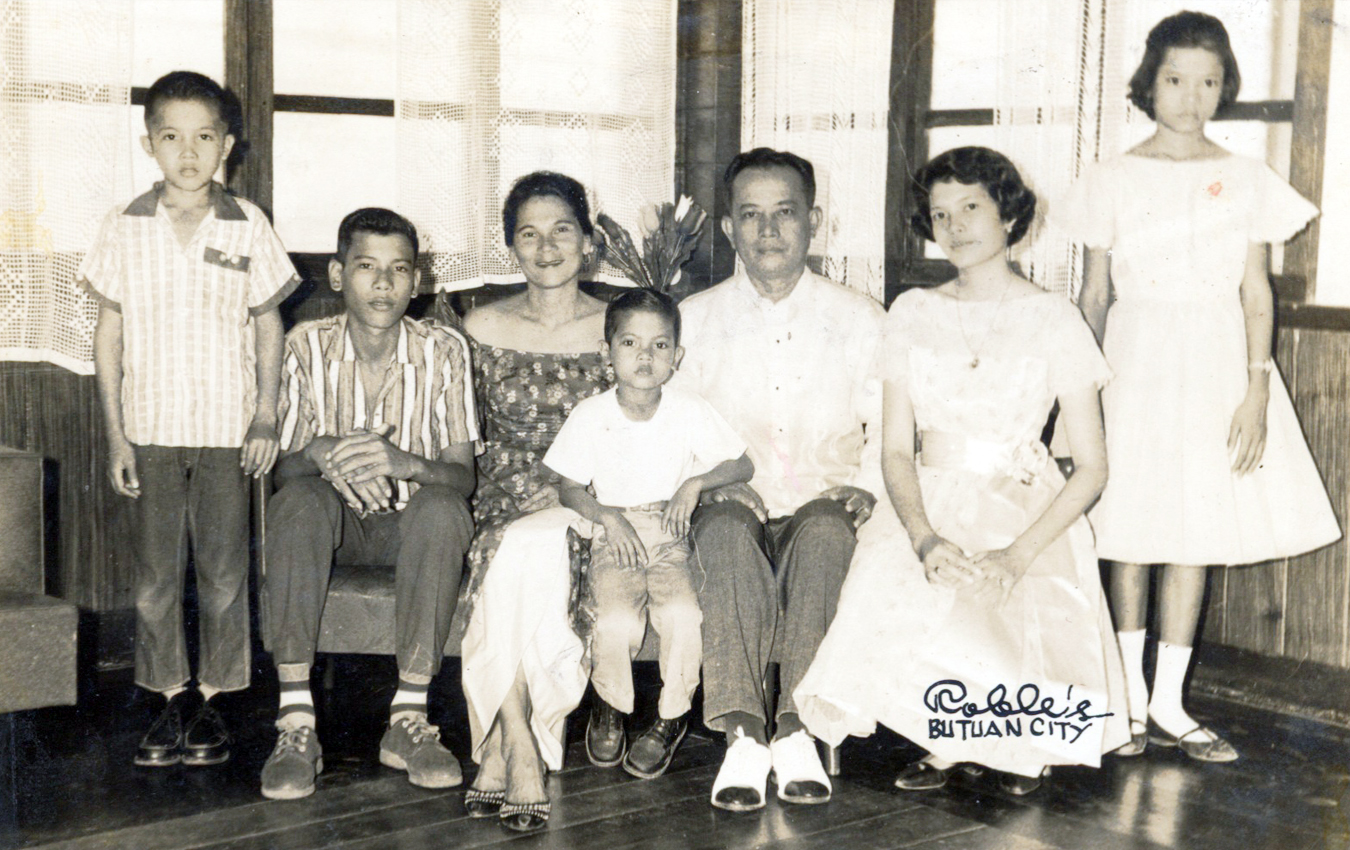 She would look for food in the kitchen only to find there was none left. Her father had emptied their pantry to feed his guests.

Their mother, Soledad or Nanay Soleng, was a public teacher who became a civic leader and philanthropist when her husband entered politics.

With Vicente traveling around the province and returning home only twice a month, the Duterte siblings were forced to “grow up fast” and become “independent”, says Jo.

But though Vicente was the politician, it was Nanay Soleng who could talk for hours on end and command attention with her loud voice and disciplinarian ways. Vicente was “soft-spoken” and “gentle,” exuding his strength in silence, says Jo.

If Nanay Soleng would shout at her children and punish them by making them kneel on monggo (mung bean) seeds in front of a crucifix, Vicente preferred to talk to his children.

The opposing characteristics of their parents would combine in their eldest son, says Jo.

“In the mayor’s character, you will see the toughness of the mother. But his heart, his acts of kindness – that, I think, comes from my dad,” she says.

Being their mother’s favorite child did not save Rody from her wrath.

His rebellious nature ripened when he reached his teen years. He would arrive in their house in Matina at 3 am or 4 am, way past his midnight curfew.

To make his escape, Rody would get the drivers and their male household helper to push their car out of the driveway. Only when the car reached the street corner would Duterte turn on the ignition, safe from the ears of his mother. 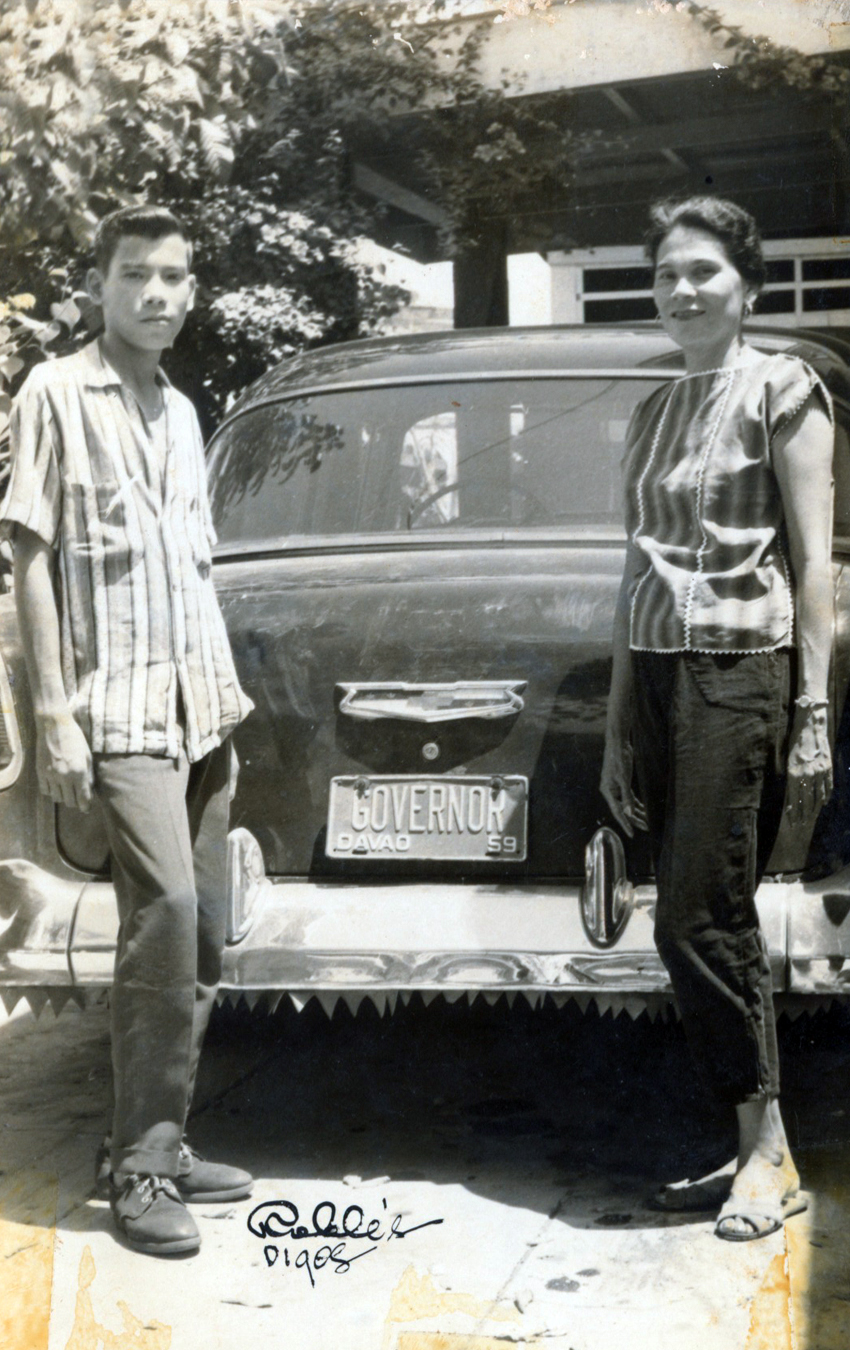 When she realized her son would never stop his late-night gallivanting, Nanay Soleng switched gears.

“She built Digong a bunkshop. ‘Doon ka matulog, hindi kita bubuksan.’ My mother would not open the house…Maraming lamok doon, because this used to be a wet area, doon nag-umpisa ‘yung muskitero niya,” said Jo.

(She built Digong a bunkshop. ‘You sleep there, I won’t open the house for you.’ There were a lot of mosquitoes there because it used to be a wet area. That’s when his use of mosquito nets began.)

To this day, Rody uses a mosquito net. He brings it everywhere he goes and even fixes it on his hotel bed.

His parents had to put up with his poor performance in school. Rody was expelled from Ateneo de Davao and spent 7 years in high school.

But one instance caused Rody to fear his father, in particular. It was right after getting his license to fly a plane.

“He tried to show off to us. He flew the plane right in front of the window, so you could actually see the plane from the window. And my father was – he did not know my father was there sleeping,” shares Jo, recalling how she feared the plane’s wings would get caught in the branches of a nearby mango tree.

Vicente almost jumped off the bed and was angry because his son had scared their old neighbor who had a heart condition.

Rody did not come home for the next 3 days as he waited for his father to calm down.

Jo believes his rebellious nature, and hers as well, was due to the rules and protocols that came with being Vicente and Soledad’s children.

The man who will be president was not only incorrigible to his parents, he was a prankster to his siblings too.

Several times, while the Duterte children suffered the kneeling punishment, Jo remembers Rody whispering to her and their other siblings, “Hmph, maniwala ka diyan. Wala nang nagbabantay (Don’t believe them. No one is watching us anymore).”

Jo and the others would relax only for Rody to shout, “O, tingnan mo sila o (Hey, look at them)!”

Brother and sister would deepen their enmity in their teenage years. Rody made it hard for anyone to court Jo.

“Whenever somebody comes in the house to court one of us girls, he would take out his gun and then bang the gate. You can see the guy thinking he’s courting the daughter of a governor then there’s this older brother who’s so tough. It was a miracle if they stayed for 10 minutes” says Jo. 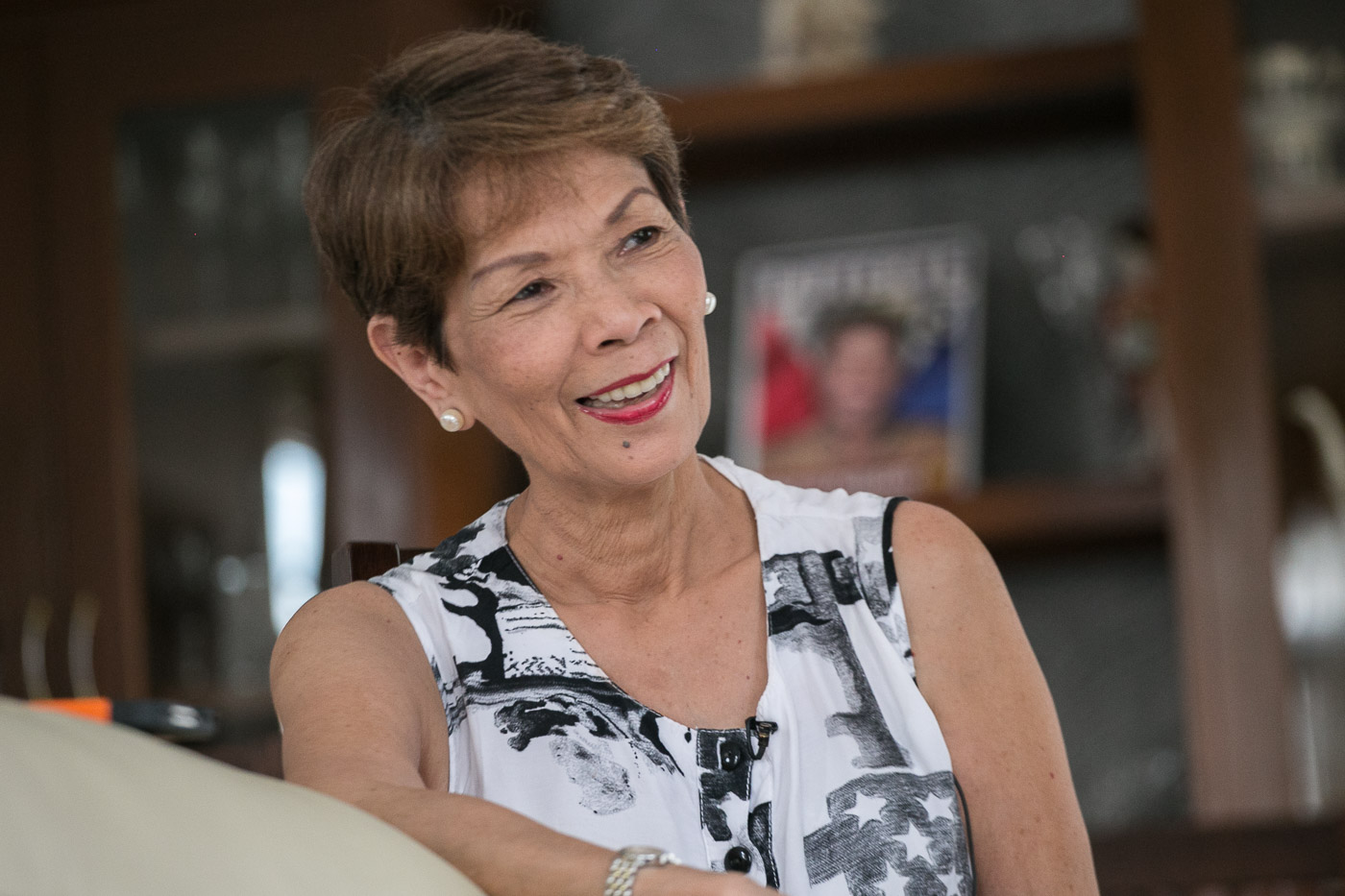 Rody got his fondness for guns from his father, who was also a collector.

He was also fond of speed. He would drive Jo crazy by making the car run up to 80 to 100 kilometers per hour, fueled by whatever argument they were having at the time.

But what Jo hated the most was how he would show up at her social gatherings.

“Sometimes he would pick me up in a party and he will break up the party and then like punta siya doon and everyone knows he is the son of the governor di ba? ‘Saan na yung kapatid ko? Pinapauwi na ng tatay ko.’”

(He would go there and everyone knows he is the son of the governor right? “Where is my sister? Our father wants her home.”)

His loud voice would cause someone to cut the music. The mood would be ruined just as the party was getting started.

“Haay naku, mag-aaway kami. ‘Sino magsabi ikaw magsundo sa akin?’ (We would fight after. ‘Who said you had to pick me up?)” says Jo, her past exasperation now softened by laughter.

The turning point in Rody’s life would come with the death of their father in 1968, when Rody was 23 years old.

“He took things very seriously already. He took his law seriously, he really studied. My father was like his post. Outside, he was very gentle but inside, he was very strong. That was the time I saw the mayor really change his attitude,” says Jo.

Vicente died of a heart attack in a courtroom while a case against him was being heard. By that time, Vicente was overweight and hated doctors and hospitals.

In many ways, he died of a broken heart. Jo believed her father suffered from the feeling of dislocation. Vicente could not say no to his partymate, then president Ferdinand Marcos who asked him to head General Services, the equivalent of the Department of the Interior and Local Government.

But when he returned to Davao after serving in the national government, Vicente felt he had lost his place in the world.

He had a falling out too with his good friend and political ally Alejandro “Landring” Almendras.

The two men spent their childhood in Danao, Cebu together. It was in fact Almendras who told Vicente to join him in Davao. Almendras, elected Davao governor, had to leave his post to run for senator. He entrusted his vacated gubernatorial post to his friend, Vicente.

The parallels between the political careers of the father and son are evident. Rody himself was appointed officer-in-charge vice mayor of Davao City before his successful mayoral bid.

In the end, the unruly Rody would be the one to follow in their parents’ footsteps. Jo, the sister with whom he quarrelled with the most, would find herself supporting his presidential candidacy.

The daredevil driver she knew would be steering the country to whatever fate lay in store. The show-off pilot would be flying to heights far above the mango trees of their childhood. – Rappler.com