He is the freshly-minted House Speaker, carrying the enormous task of pushing President Rodrigo Duterte’s legislative agenda forward with the other 291 members of the House of Representatives.

These days, Alvarez finds himself attending one meeting after another, and that’s on top of crafting bills, leading House sessions, and granting countless media interviews. Adjustments have had to be made in his daily routine.

(Oh yes, now I don’t have control over my schedule because I really have to do it. Sometimes, I’m forced to do things I don’t want to do yet. I have deadlines.)

He is no stranger to legislative work, having been elected representative of his district for the first time in 1998 to 2001. It was in the 11th Congress where Alvarez met Duterte, who was then Davao City 1st District representative. He has the backing of the 250 members of the House supermajority, their sheer number giving Alvarez comfort that Duterte’s pet bills could be passed under his watch. (READ: Death penalty, urban problems top House legislative agenda)

“Because in a democracy, we always argue, but at the end of the day, if I have the majority, I will prevail,” said Alvarez.

In many ways, Alvarez is like Duterte – practical, a son of Mindanao, and a believer of federalism.

His anointment as House Speaker by the ruling Partido Demokratiko Pilipino-Lakas ng Bayan (PDP-Laban) was not a surprise. Alvarez, after all, played a crucial role in Duterte’s rise to the presidency.

Alvarez, PDP-Laban’s secretary-general, convinced his party to have one member – Martin Diño – file his certificate of candidacy (COC) on the last day to give Duterte another shot at being president.

At the time, Duterte said he was not interested to run, refusing to fly to Manila to file his COC in October 2015.

“All of us supporters were expecting him to file on the last day. When there was this parang uncertainty kung mag-file siya o hindi nung morning na ‘yun (if he would file that morning), we did everything. We sent him a plane, he didn’t board. Until the last hour, wala na talaga (it was a foregone conclusion). I think most of us really cried,” shared Alvarez. 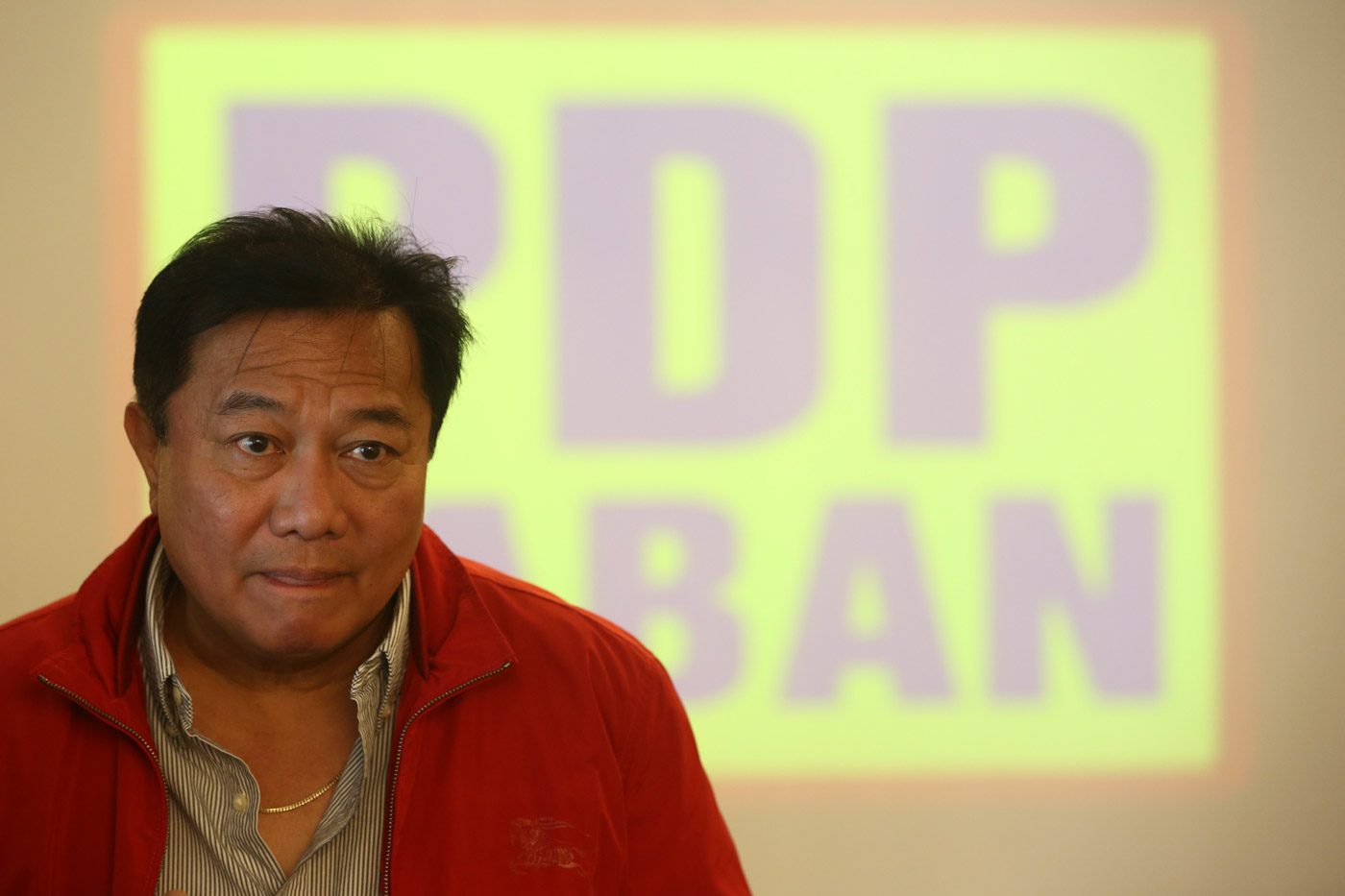 The House Speaker was not even supposed to participate in the 2016 elections himself, but Alvarez said he was forced to do so “out of frustration that candidate Duterte did not file on the last day.”

“An old friend asked me to participate in the elections in Davao del Norte. He brought me a certificate of candidacy, he asked me to sign it, and accompanied me to the Comelec (Commission on Elections) to make sure I would really file. The rest is history,” said Alvarez.

Things did turn out well for both of them. Duterte decided to seek the presidency on November 27, 2015, getting more than 16 million votes at the end of the elections.

Alvarez won against his closest rival Arrel Olaño by around 16,630 votes.

He had no idea he was later going to be the House Speaker: “No, not in my wildest dreams.”

According to Alvarez, his friendship with Duterte made him accept the offer to lead the House of Representatives.

“We’ve always been friends way back in so many years. The reason why I also somehow accepted this task of being the Speaker of the House is to help the President basically in navigating for the realization of an advocacy, which is federalism,” said Alvarez.

He believes the current form of government – where power and wealth is centralized in Metro Manila – has placed the country deep in poverty and corruption. (READ: Will federalism address PH woes? Pros and cons of making the shift)

“So why not? Pag federalized na tayo, naturally ‘yung opportunities bababa ‘yan sa mga regions. We would be creating a lot of opportunities because ‘yung natural resources nandodoon, generating powers nandodoon para sa electricity concerned. There are so many factors that would invite opportunities to go down to the regions,” he said. For both Duterte and Alvarez, the way to go about charter change is through a Constituent Assembly, wherein the 17th Congress turns itself into a body that amends the Constitution through a vote of 3/4 of all its members. (READ: How many states should PH have under federalism?)

As a friend, Alvarez describes the President as “very honest and sincere.” But as a politician, Alvarez said Duterte is an “action man” who “wants things to happen.”

Outside of work, Alvarez said he and Duterte would often call each other: “Puro kalokohan naman ‘pag nag-uusap kami (We make jokes when we talk).”

Asked about a memorable experience with the President, Alvarez recounted a time in 1999 when Duterte took him to ride an ultralight aircraft in Pampanga.

(It’s a small plane. You’re just wearing a seatbelt and there are no walls on the sides. It’s like riding a motorcycle up in the air!)

(It was exciting and scary because you could see everything when you’re up there. He likes doing things like that, adventurous and risky.)

The 58-year-old Alvarez obtained his political science degree from the Far Eastern University in 1978. He is an alumnus of the Ateneo Law School and practiced law from 1984 to 1986.

Alvarez then served in the staff of former senator Wigberto Tañada from 1987 to 1992.

He was later designated action officer at the Manila International Airport Authority (MIAA), rising through the ranks until he became senior assistant general manager and chief operating manager from March 1995 to September 1997.

‘In a democracy, we always argue, but at the end of the day, if I have the majority, I will prevail’ – Speaker Pantaleon Alvarez

He faced a plunder complaint after being implicated in wrongdoing for awarding the Ninoy Aquino International Airport (NAIA) Terminal 3 build-operate-transfer contract to the Philippine International Air Terminals Co Inc (Piatco) when he was still with the MIAA.

The MIAA-NAIA Association of Service Contractors filed the case against him because Alvarez’ wife Emelita owned 33% of Wintrack Builders Inc, a company that supposedly profited from an excess of P76.49 million from excavation work it did with Piatco.

The Ombudsman, however, dismissed the case on March 19, 2001 due to “lack of evidence.”

As Alvarez ventures into another chapter in his political life, his wife and their 4 children are supporting the new House Speaker in ways they can.

Alvarez’ daughter Paola, a lawyer and the new spokesperson for the Department of Finance, said Emelita is now running the Congressional Spouses Foundation Inc.

It’s an organization of the spouses of sitting legislators that aims to complement Congress’ legislative agenda through socio-civic and developmental initiatives.

Paola also helped run Alvarez’ congressional staff when he was still transitioning into his new job. “It was a real adjustment because we were used to normal lives. We would go unnoticed. It’s like we can walk around with him [before] because we like going to antique stores,” said Paola when asked how her father’s speakership has affected the family.

She said her siblings now distance themselves from their father when he makes public appearances. But at home, Paola said Alvarez is an “approachable” father.

“He’s not really strict as long as you know your bounds,” she said. “So for us, we really respect him… At home, we have leeway. We can talk to him straightforward.”

Alvarez has two more children from a first marriage.

Early on during his stint as Speaker, Alvarez already met opposition to the first two bills he filed seeking the reimposition of the death penalty and the lowering of the minimum age of criminal responsibility. (READ: Congressmen want 9-year-old kids charged for crimes)

He also squashed critics of lawmakers who decided to jump ship to PDP-Laban when the President became victorious after the polls. Alvarez refused to brand them as “balimbing” or turncoats.

“It would be unfair na tawaging balimbing ‘no? (to call them turncoats, right?) Why? I would rather see it in the point of view of love of country. There’s a new administration. If you believe in the programs of the new administration, you’re inclined to support it… So [it’s] more on kung sino nakaupo, susuporta ako (So it’s more of I’d support whoever is sitting in power),” said Alvarez.

According to him, the introduction of the multi-party system under former president Corazon Aquino  led to the phenomenon of turncoatism, when a politician shifts his or her alliance from one party to another. Alvarez may not have planned to become Speaker, but now that he holds power, he wants to be remembered as the man who delivered on his promises.

“Well I’m always on the side of the people, that’s one. And I want things done. May mga target tayong legislation na gusto nating gawin (We have target legislative measures that we want to pass) and I want it done on schedule,” said Alvarez.

“I’ll see to it that the congressmen would be happy under my leadership. As long as they are happy, they will be actively participating in Congress.” – Rappler.com