A month ago, Gina Lopez appeared to be the exact opposite of her predecessor Ramon Paje, who quietly left his post of 6 years with a request: that the environment department give Lopez twice the support he got.

Unlike Paje who faded into the background, Lopez that day was so comfortable in her own skin it’s hard to believe it’s only her first day as the new secretary of the Department of Environment and Natural Resources (DENR).

“In essence, I wanna say that the team is everything, and we want to work with the Filipino people. And three, I love you all,” she endearingly told a roomful of regional directors, assistant secretaries, and undersecretaries during her first speech as secretary.

Later that day, the unpredictable Lopez would give her marching orders, but only after peppermint oil was passed around so that her staff could relax before going down to business.

Later that day, she made DENR employees relax first before giving them her marching orders pic.twitter.com/TElhj92Q0B

Alvin Constantino, president of the Kalipunan ng mga Kawani sa Kagawaran ng Kalikasan (K4), said Lopez’ unconventional introduction to the department must have been her way to win the hearts of her employees.

“Super effective! [It’s] very different. My first impression is she’s really approachable, easy to get along with, ‘di ka matatakot (you won’t be afraid of her),” said Constantino, a lawyer who heads K4 – the group that represents all DENR employees’ unions in the country.

Perhaps Paje didn’t have to worry about Lopez getting the department’s support after all.

But to those who’ve worked before with the secretary, this has always been Lopez’s management style: she makes her employees feel like her family.

“She is just too excited,” said Ana Junio, communication officer at the ABS-CBN Lingkod Kapamilya Foundation, which Lopez chaired before her appointment to the DENR. 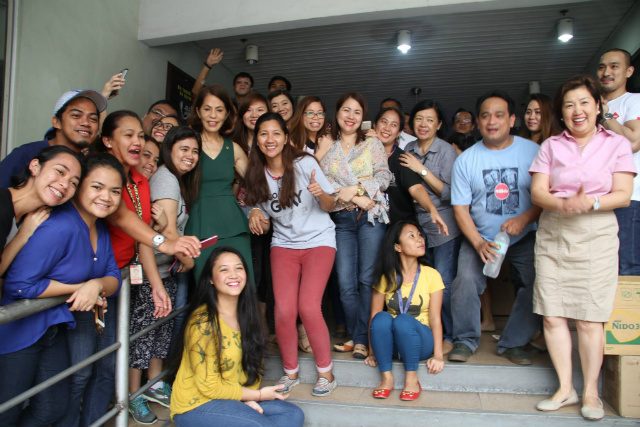 For Junio, the Gina Lopez she saw at the DENR on the first of July was the same energetic leader whose passion for the environment and poverty alleviation translated to many of the foundation’s programs.

Even President Rodrigo Duterte took notice of Lopez’s energy during his first State of the Nation Address.

(She went to Davao, that was around 1 o’clock. She kept talking for two hours, with no end in sight… At 3 am, she was going extemporaneous, like a congressman. I told her, ‘Ma’am, it’s almost 4 am. Ma’am, what if you lead DENR instead?’)

She eventually accepted the post, but not before she had meditated about it first.

“I meditate every day for an hour-and-a-half and that’s the essence of my life: my spirituality, my connection with the divine,” Lopez told Rappler in an interview.

“What happened is I think [Duterte] asked me, I can’t even remember one day and the next day, I was meditating and I was looking at the situation that existed before me with a… co­-meditator, and we looked at it and in this space, I just felt a tremendous feeling of the divine.”

“It’s like when you meditate. you feel God. And it just came in the space and I felt the energetic heart of the country. It was a really, really, really beautiful space, and I saw that if I take this and I’m able to maneuver this well, it would be good for my own spiritual growth, and it would be very, very good for the country. So therein lies the challenge.”

Lopez wrote in an essay that it was also meditation that changed her life forever. At 18 years old, she left home, renounced her life of privilege, and became a full-fledged yoga missionary in Portugal, India, and Africa.

There, she had to constantly look for money for her own survival, and for the needs of underprivileged kids she served.

“While she was there, the resources were not readily available. She only had two sets of clothes, [and] singlehandedly she built a school, so she would go to one company, to another, just to ask for more funding. For her, nothing is impossible. If only people will work together, everything is possible,” Junio shared.

Jennifer Chan, who has worked with Lopez for two decades, knew her boss would accept Duterte’s offer because “she’s pioneering.”

“Hours before she accepted, we were on the phone, she was in Japan, in Nakasendo walk. Of course there were some of us who were very much, you know, ‘Wag, ‘wag kasi magulo ang mundo ng pulitika’ (Don’t, don’t accept it because the world of politics is messy) and all,” said Chan, the communications and publicity head of the foundation.

“But when I heard her, she was very happy, she was at peace, she was so excited, because she felt she can do more [at DENR]. Not only for the foundation’s sites, but she can do something for the whole Philippines. Since she was so happy about it, why should we stop her?” she said in a mix of English and Filipino.

At 62, Lopez has already done a lot for the environment, including the rehabilitation of the La Mesa Watershed and the La Mesa Ecopark.

The ecopark is Lopez’ model for enterprise development in the country. And having come from a business family, she just can’t shake off business from her system even if she’s already part of government.

“Enterprise development is in my DNA. I see the benefits of it,” Lopez said.

This is just one of the many plans that excites Lopez now that she belongs to the government and has the money to do more. She recalled having to always look for money when she was still with her foundation.

“The challenge here is even if we have a lot of money, if I don’t have honest people on the ground, and even more important that people that resonate with my values, people that can think out of the box, people that can see how we can use the money well, whatever money I have is not gonna have any impact at all,” she added.

Environment has always been at the forefront of Lopez’s advocacies because she says it is the advocacy “with the maximum impact.”

“When I did the esteros, all I did was take away the squatters, and I wasn’t even able to clean the water, but I cleaned up the environment. If you look at the statistics…the peace and order increased…the health increased, the economy [and happiness] improved,” the former chair of the Pasig River Rehabilitation Commission said.

“All I did was clean the place and make the environment more conducive. It’s the home you live in, and the effect is not just physical…it’s emotional, it’s spiritual.”

After two decades in civil society, Lopez is excited to be on the other side of the fence. She’s glad she can make a difference with the power she now holds as a Cabinet official.

“I feel a lot of joy because people come here, I’m actually in the position to help them, and not just helping with regulations but help them with infusion of capital and resources in the area. We can actually help them get their act together. So it’s very exciiting,” she said. Environmental groups have welcomed Lopez’s appointment to the DENR, but the mining sector is not as ecstatic, especially since the secretary’s first order of business as soon as she assumed office was the crackdown on mining companies that violate environmental standards.

Her department has already suspended the operations of at least 6 mining companies since the audit of all existing mines in the country began in July. She has strongly opposed the proposed Tampakan open-pit mine, and believes it’s time to change the “unfair” Philippine Mining Act.

While Gina Lopez as an activist was an anti-mining advocate, her role now as environment secretary requires her to follow the rule of law. Thus, since her appointment, she has repeatedly said she is not against the mining industry.

“I clearly can’t make decisions emotionally… I am thankful that the rule of law actually protects the common good. Having said that, I do recognize that there needs to be a considerable amount of equilibrium so that the different stakeholders involved feel there’s a sense of fairness and justice and they haven’t been pre­judged.”

Her recent pronouncements on mining show a leader who does not mince words and tells it like it is. Chan said while Lopez has always been this fearless, she is not the type who holds grudges against critics.

“It’s unhealthy – that’s what she says… She always tells us, do not let our anger ferment,” she said of Lopez.

It will be a long, 6 years for Lopez – assuming, of course, that she stays for the long haul. During her term, she wants the department to be a proactive government agency, and not just a regulatory body.

And then there are Duterte’s environmental priorities:

With one month down, life is just about to get busier for Lopez. But she has set her eyes on one goal: to not let Filipinos suffer by any environmental policies that will come out of her department. With the daunting task ahead her, it will matter who Lopez listens to. She said she has a team of consultants who help her in decision-making, but even her key officials at the DENR must learn how to keep up with her energy.

“Since Ma’am Gina is a visionary, she [also] needs someone who will deal with the logistics, the processes. She has an idea, so this person has to help her get there,” Chan explained.

Chan revealed that Lopez engages the academe whenever she wants to verify her information. Junio said the secretary also works with the Green Thumb Coalition, composed of ABS-CBN Foundation’s different environmental partners.

(What’s good about her is she goes down to the communities. She herself goes there, she talks to the farmers, the fisherfolk. Aerial shots [of communities?] She takes them herself.)

Rank and file employees at the DENR consider themselves Lopez’s most important partner in the department.

“From my first encounter with her, she already said she will support all the rank-and-file employees and think of programs that would benefit the employees of the DENR, and for that I appreciate her,” said Constantino.

Apart from her environmental policies, Lopez is restructuring her department’s organization “to make it fit what I want to do” and to upgrade the quality of staff at the ground level.

She’s taking her cue from the President, who she said she “totally resonated” with.

“I’m gonna make it happen. And even with me, I get bored with procedure. What really gets me excited is when I make things happen on the ground,” Lopez said.

If her first month in office is any indication, she clearly gets things done, and she’s fearless of who she’s up against – much like her President – because she knows what she’s fighting for.

Want to work for some of the best companies in the Philippines? Click here to apply.