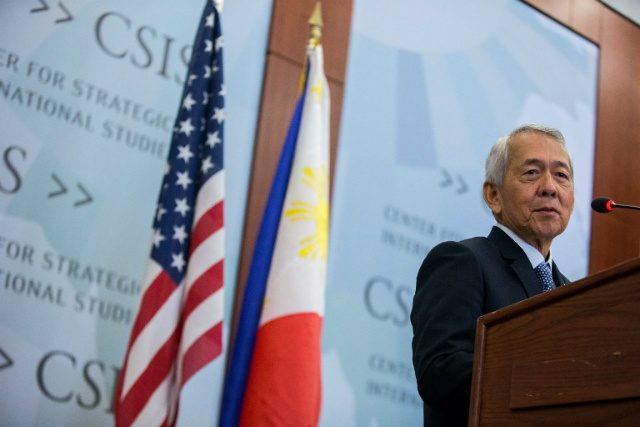 MANILA, Philippines – Did Foreign Secretary Perfecto Yasay Jr lie when he declared he has always been a Filipino and had never been an American citizen?

On November 28, an irked Yasay responded to Rappler’s questions about his citizenship, saying, “I am a Filipino, I have always been a Filipino, and I have never been a US citizen. I continue to be a Filipino, so that’s the end of the story.”

Yasay was asked these questions because under the Philippine Citizenship Retention and Re-acquisition Act of 2003 or Republic Act (RA) 9225, appointed public officials like Yasay cannot be a citizen of another country.

Questions about Yasay’s citizenship, along with a slew of other issues, have surfaced as the Commission on Appointments (CA) has yet to confirm him as secretary of the Department of Foreign Affairs.

On November 22, Rappler requested the CA, through Senate President Aquilino Pimentel III, to provide information about Yasay’s US citizenship. More than a month since that request, we still have not received this information as of posting time.

If Yasay lied about his citizenship, this can be raised against him at the CA, which is tasked to examine the “integrity, competence, and fitness” of presidential appointees.

While Yasay said he was never an American and never owned a US passport, at least 4 independent sources told Rappler otherwise.

The year 2009 saw Yasay preparing for the 2010 elections, when he ran for vice president alongside presidential bet Brother Eddie Villanueva. RA 9225 requires candidates for public office to renounce “any and all foreign citizenship.”

Yasay renounced his US citizenship, according to at least two sources privy to the information, and used for the last time his US passport for travels to the Philippines in 2009. But he denied he was ever a US citizen when asked directly.

Ted Laguatan, an immigration lawyer based in the US, explained that “only US citizens can have US passports”. Recognized as an expert-specialist in immigration law by the California State Bar, Laguatan also said, “If a person holds a valid US passport, he is undoubtedly a US citizen.” While the DFA chief said America “has failed” the Philippines, Yasay, 69, lived and worked in the US for years.

Yasay was admitted to the New York Bar in 1979, according to data from the New York State Unified Court System.

His registration status is “delinquent” as of January 8, the New York State Unified Court System said. This means Yasay has not paid his dues as a lawyer in New York.

Yasay also taught law as a visiting professor at the William S. Richardson School of Law at the University of Hawaii.

His profile on the DFA website says he also wrote articles on law “published in US-based Philippine newspapers and magazines,” and hosted a “live radio broadcast in Metro New York,” where he advised listeners with legal concerns.

In a letter dated and received on December 2, Rappler requested the Bureau of Immigration (BI) for a copy of Yasay’s travel records from January 2006 to November 2016.

After weeks of processing, the BI said they sent a formal reply to Rappler’s request on December 29, or 18 days after the BI received the letter from Rappler. We have, however, not received the BI’s response, reportedly sent through regular mail, as of posting time.

Aside from his US citizenship, another issue often raised against Yasay is his having been charged by the Bangko Sentral ng Pilipinas (Central Bank of the Philippines) before the Department of Justice in April 2011.

Having pending cases is one of the things weighed by the CA. The CA requires each appointee to issue a statement, under oath, on whether he “has any pending criminal or administrative case against him.”

Elmore Capule, general counsel of the BSP, said that Yasay’s cases “are still pending investigation” at the DOJ as of December 1, or more than 5 years after the BSP filed these charges.

These cases had been “submitted for decision 3 years ago,” Capule said.

The BSP on April 4, 2011, had filed 4 criminal charges against Yasay, then director of Banco Filipino, and 9 other Banco Filipino officials “for falsification, grant of illegal loans, and major violations of banking laws.”

The BSP said these Banco Filipino officials “repeatedly violated several laws” on account of the following:

The BSP pointed out that Banco Filipino “engaged in hazardous lending and lax collection policies and practices.”

Former Philippine ambassador to the US Jose Cuisia Jr said in a phone interview with Rappler on October 11, “Frankly, that’s very embarrassing if a secretary of foreign affairs has pending cases.”

Cuisia explained: “Anywhere he goes, he is the representative of the President. And if he has some pending cases, no matter, even if he has not been charged, would that not be quite embarrassing for the country?”

‘Don’t put words into my mouth’

On top of his cases before the DOJ and his citizenship, Yasay has been questioned for the truthfulness of his statements during his first 5 months in office.

The most striking example was when he denied in Manila a statement he made in Laos in July 2016.

In Laos back then, Yasay denied that the Philippines pitched to include Manila’s legal victory against Beijing in a joint communiqué of foreign ministers of the Association of Southeast Asian Nations (ASEAN).

“Never, never did,” Yasay said in an interview with Filipino reporters in Laos on July 26.

A day later, Yasay made a complete turnaround. In Manila on July 27, Yasay was asked a follow-up question about his statement in Laos. In response, he claimed that he “never said those things.”

In fact, Yasay said, he “vigorously…pushed for the inclusion and mentioning of the arbitral tribunal award” in the ASEAN statement. “Please don’t put words into my mouth,” Yasay said in Manila.

An audio recording obtained by Rappler, however, showed a lying Yasay in Manila. Based on the recording, he indeed said in Laos that the Philippines “never” pitched to include the ruling against Beijing.

Yasay also told reporters in Laos, “Please, okay, don’t put words into my mouth.” (Watch and compare Yasay’s statements in Manila and Laos, side by side, in the video below.)

Yasay had drawn flak even before he took office on June 30.

Once, at a restaurant in June, a former DFA secretary even approached him to say, “You are the least qualified to become secretary of foreign affairs! Mr Duterte should not have considered you!”

In an interview with Rappler, Yasay said he “just smiled at him” and said, “Thank you for your comments, your critical comments. These would be helpful in keeping me on track as I do my work.”

Yasay said his demeanor back then was an example of his diplomacy and tactfulness – crucial skills for a secretary of foreign affairs. 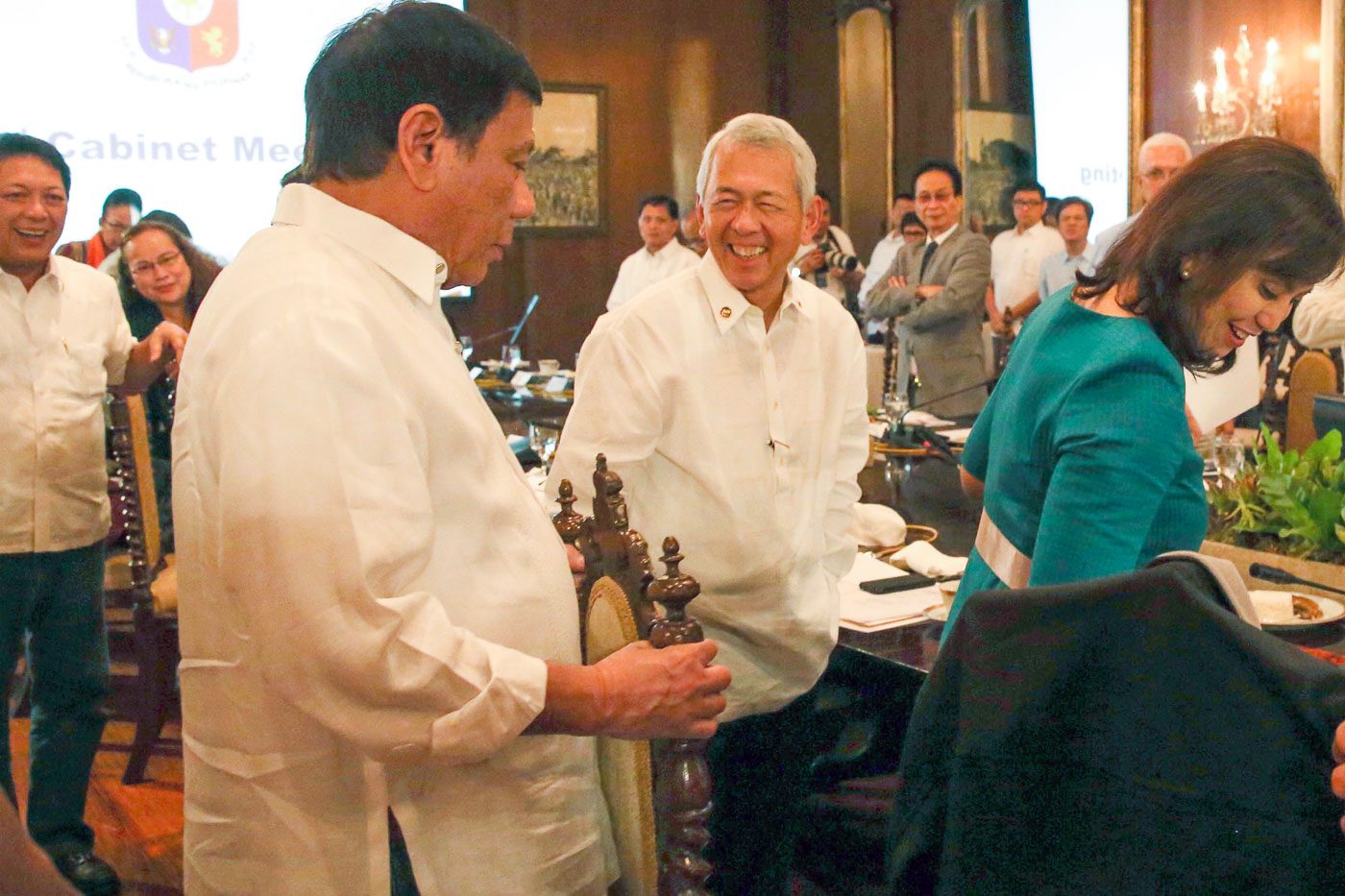 Yasay, who chaired the Securities and Exchange Commission from 1995 to 2000, had no previous experience at the DFA.

He was best known for testifying at the impeachment trial of then president Joseph Estrada, who was ousted in 2001. He accused Estrada of corruption and abuse of power.

Yasay later ran for senator in 2001, and for vice president in 2010, but lost in both elections.

Decades before these, Yasay shared a dormitory room with Duterte when they were law students.

Both Yasay and Duterte finished law in 1972, though they studied in different schools – Duterte in San Beda College and Yasay in the University of the Philippines.

Yasay, who called Duterte a “very disciplined” while “very nocturnal” student, became one of the President’s top campaigners in the 2016 elections.

Yasay told Rappler that his appointment at the DFA, however, came as a surprise. He learned only around 30 minutes before Duterte announced his name to the public that the President wanted him at the DFA.

Without a doubt, Yasay has Duterte’s full confidence.

Quelling rumors that Yasay was on his way out of the DFA, Duterte said as early as July last year, “I would like the Philippines to know that I personally pleaded with Secretary Yasay to join my government because he is competent and honest, and he knows his business.”