CHR in 2016: ‘We are not enemies of the fight against drugs’ 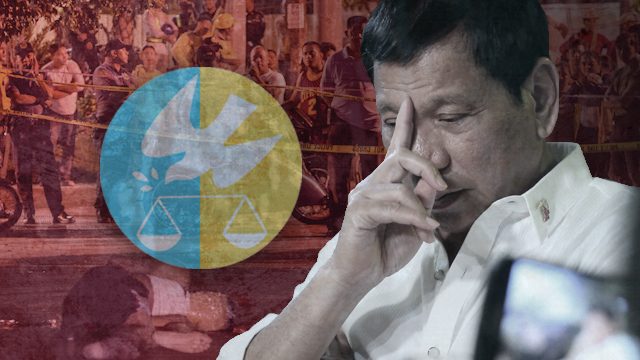 MANILA, Philippines – Try to listen to one of President Rodrigo Duterte’s speeches in 2016 and you will immediately get the impression that the concept of human rights does not quite sit well with him.

Just last Monday, November 28, he blasted human rights defenders and threatened to include them among those who would die if drug users multiply.

(Human rights defenders said I ordered the killings so I told them, “Okay, let’s stop and let [drug users] multiply so when it’s harvest time, there will be more deaths.” I will include you because you let them multiply.)

This is not the first time Duterte publicly threatened those who called the current administration out for the alleged human rights violations in the context of the war on drugs.

Organizations that are on Duterte’s negative list include the United Nations (UN) and its various agencies, the International Criminal Court (ICC), as well as countries belonging to the European Union (EU), plus the United States (US).

The foul-mouthed president had threatened to withdraw from the UN and the ICC. He called American and EU leaders names after they released statements on the administration’s intensified war on drugs.

In the Philippines, bearing the brunt of Duterte’s rage is the Commission on Human Rights (CHR).

Their “relationship,” however, goes a long way back – way before Duterte called Commissioner Chito Gascon an “idiot”, accusing the agency of “nitpicking” after it concluded that he violated the Magna Carta of Women with his rape remark about an Australian victim of a hostage-taking incident in 1989.

CHR, under the leadership of then commissioner Leila de Lima in 2009, investigated the alleged existence of the Davao Death Squad (DDS) which was reportedly behind 206 deaths from 2005 to 2009. (READ: Davao Death Squad: What ever happened to the investigations?)

In 2012, the CHR issued a resolution saying that it found “probable cause” and recommended that the Office of the Ombudsman investigate the “possible administrative and criminal liability” of Duterte in relation to the numerous killings under his watch as Davao City mayor.

According to a letter sent to CHR by the Office of the Ombudsman in January 2016, a disposition approved by the Overall Deputy Ombudsman Melchor Arthur H. Carandang showed that “no evidence was gathered to support the killings attributed or attributable to the DDS” therefore the investigation was “closed and terminated.”

CHR, the independent body created by the 1987 Philippine Constitution to ensure the protection of human rights guaranteed by the Bill of Rights, is now facing a problem of “unprecedented” proportions under the new administration.

While Gascon said that summary killings are not unique to the Duterte presidency, the current magnitude is something that the CHR has not experienced since its creation post-Martial Law.

As of Saturday, December 3, data from the Philippine National Police (PNP) showed that 5,869 alleged drug personalities have been killed since July 1. Out of this number, 2,028 were killed in police operations while 3,841 were victims of extrajudicial or vigilante-style killings. (IN NUMBERS: The Philippines’ ‘war on drugs’)

According to Commissioner Gwendolyn Pimentel Gana, chair of the task force on extrajudicial killings which was established amid the rising number of deaths, as of November 2016, CHR is currently investigating a total of 346 cases of drug-related deaths.

While a handful of these investigations were started due to complaints by victims’ families, majority were initiated by CHR itself. Unfortunately, due to limited resources, the Commission cannot investigate all killings under Duterte’s war on drugs.

The investigations are also mostly focused on deaths in the hands of policemen. While the Commission also looks at vigilante-style killings, Gana told Rappler that they should be addressed and investigated by law enforcers first.

Data from the PNP shows that, as of November 23, 2,646 cases of vigilante-style killings are currently under investigation, while 724 cases have been concluded, with 460 arrested suspects and 264 suspects at large.

In lieu of doing its own investigations, CHR is constantly monitoring if the PNP, specifically its Internal Affairs Service (IAS), is doing its job of investigating these deaths – whether killed during police operations or killed vigilante-style.

(We are monitoring what PNP-IAS is doing with its investigations of these cases. That’s our mandate, to see if government agencies are doing what they’re supposed to be doing.)

Gana, however, admitted that they find it difficult dealing with the PNP, saying that “more can be done and expected from them in terms of response.”

(We have sent numerous letters asking for the records of their investigations. They answered only after our third letter but the information they gave were statistics that they also provide to the public. That’s not what we want because we need is the status of each case they are investigating.)

Although there is a “presumption of regularity” on how anti-illegal drugs operations and investigations are carried out, the PNP should also be transparent to the public and other government agencies, specifically to the CHR.

“The PNP can and should be held accountable in these cases if they remain unsolved since its primary mandate is to look for the criminals and put them in jail.”

Obtaining data from the PNP is not a unique problem to the CHR.

Rappler also tried to obtain from the PNP in late October 2016 details related to the casualties of the drug war. The request was, however, rejected because we were told “it may compromise ongoing investigations, operations, and other related activities related to Project Double Barrel.”

Confidence and trust in Duterte’s war on drugs

The state of human rights in the Philippines was shown in a bad light in 2016, but Gana said she hopes that 2017 will be milder and that the new year will bring less cases of drug-related killings.

Yet she also expects the PNP to be more aggressive in addressing extrajudicial cases. She wants it to be more cooperative and more transparent.

Aside from ensuring that law enforcers use a human rights-based approach in apprehending suspected drug personalities, Gana also said that the PNP can make use of body cameras or other ways of making sure that drug raids are recorded.

But the PNP is only one aspect of the administation’s anti-illegal drugs campaign.

Ultimately, if Duterte wants his drug war to succeed, he should get the help of not just the police, but also other organizations. However, the blood that has been shed in the numerous killings may in itself be a hindrance to people who wish to help.

After all, results of a Social Weather Stations survey conducted in September 2016 show that Filipinos are “satisfied” with the drug war, but they want drug suspects to be arrested alive.

“I think the only way to gain confidence and trust in all his war-on-drugs pronouncements is for him to tell the police you cannot just go about killing anybody that you think is guilty of this crime of drugs,” she added.

Policemen should understand that the justice system, firmly in place in our society, should be followed. Duterte, meanwhile, should be clearer with his statements in relation to the war on drugs. (READ: Shoot to kill? Duterte’s statements on killing drug users)

(I hope that police don’t need to have doubts or have to second guess or interpret what he [Duterte] says. He should order the PNP to do its mandate, thoroughly investigate existing cases, even police who are implicated in the war on drugs.)

Gana also echoed the sentiments of Senator Panfilo Lacson during a Senate probe into the death of Albuera mayor Rolando Espinosa Sr that the PNP should focus equally on “addressing the cleansing operations of police officers.”

(What was said during the Senate hearing was probably right. The PNP should have done internal investigations and cleansing first because what’s happening now is that the killings done while in custody are the handiwork of other policemen involved in illegal drugs. That’s why good law enforcers are dragged into the issue because the cases of the bad eggs are becoming prominent, and it’s because they’re really behind wrongdoing.)

Given the pace of investigations, is there already a need for a foreign body to intervene?

For Gana, Philippine laws and courts should be allowed to do their jobs before the cases reach the ICC, for example.

“Personally, I am very protective of our sovereignty and I want to give our national government and national laws [the opportunity] to work first,” she said. “That’s why we are, as CHR, looking and calling the attention of all appropriate agencies to solve this problem first.”

The International Criminal Court (ICC), in October 2016, has said that it is “closely following” the Philippines’ war on drugs to see if the drug-related deaths may be considered “extrajudicial killings” that may warrant a preliminary examination.

The Philippines is the 117th country to ratify the Rome Statute in 2011. Any country that is a signatory to the statute automatically places itself under the jurisdiction of the ICC.

The ICC, however, can act only when the national courts “are unable or unwilling to exercise jurisdiction.” It will not displace or overwrite the role of national courts but only aims to complement it.

Considering that Duterte previously said the government will not stop “until the last drug lord, the last financier, and the last pusher have surrendered or [been] put behind bars or below the ground,” it is likely that the war on drugs will carry over to 2017.

While firmly hoping that there will be less or no instances of deaths next year, CHR will still continue monitoring the situation. But Gana said the public should also be vigilant.

“That’s why we are on our toes and we are also calling on the public, the civil society, and human rights advocates that they should also be vigilant.”

Enlisting the help of the public, however, may pose as a challenge, considering that 2016 is not really a good year for CHR in terms of public perception. This is mainly due to the continuous tirades of Duterte against the Commission and other human rights defenders.

‘Not enemies of the fight against drugs’

Aside from memes lambasting and humiliating those who dared challenge Duterte’s public statements, there is a mistaken notion among citizens that the Commission protects only criminals and not victims.

This is not the case, Gana insisted, as the public should realize that the concept of human rights is broad – human rights, after all, includes a person’s right to education and food, among others.

“I think we live in a democratic society [where] we take for granted our freedoms, because after Martial Law, we live in a society that’s relatively free and we never really looked at other freedoms as part of our human rights,” she explained.

“Marami ‘ata ang hindi may hindi alam na ang human rights pala ay napaka-broad at malaki ang coverage.” (Many it seems do not know that human rights is very broad and has a wide scope or coverage.)

Despite the negativity directed at CHR, Gana assured the public that they’ll continue to see to it that human rights will be respected and not violated.

“We are doing everything we can to protect human rights,” she emphasized. “We are not daunted by 2017.”

“We’re still going to be here doing the best we can, but what we just hope is that people will understand more what our mandate is, what the CHR is about,” Gana said.

“We are not enemies of the fight against drugs, we are partners that would be very protective of the rights of every individual.” – Rappler.com

All photos by Rob Reyes