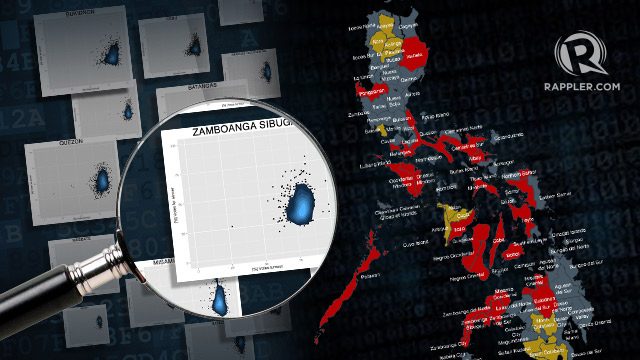 Facebook Twitter Copy URL
Copied
EXCLUSIVE: Election results in these provinces may be up for recount, if the Presidential Electoral Tribunal grants the petitions of Marcos and Robredo in their respective protests

MANILA, Philippines – Besides seeking the nullification of votes in 3 provinces in the Autonomous Region in Muslim Mindanao (ARMM), defeated 2016 vice presidential candidate Ferdinand “Bongbong” Marcos Jr is also asking for a vote recount and an examination of ballots, election documents and equipment in 27 areas around the country.

This is part of the former senator’s election protest filed before the Presidential Electoral Tribunal (PET) against Vice President Maria Leonor “Leni” Robredo.

Robredo then filed a counter-protest, listing 13 provinces where she is also requesting for a recount of votes.

In a judicial revision or recount, physical ballots are manually examined to verify the number of votes obtained by each candidate, as counted by the vote-counting machines on election day.

In a preliminary conference brief on June 15, the Marcos camp identified 3 provinces as “pilot areas” for the recount: Iloilo, Negros Oriental, and Camarines Sur, Robredo’s home province. Robredo got a total of 1,493,517 votes in these provinces, while Marcos received 202,136 votes.

The Robredo camp also named 3 provinces in their preliminary conference brief: Sulu, Cotabato, and Capiz, where Robredo herself won. She wants a recount in these areas too.

If either camp can prove their case in these provinces, the recount for all other areas in their respective protests will proceed. The two camps met in a preliminary conference on Tuesday, July 11, to begin arguing their cases before the PET. (READ: Presidential Electoral Tribunal: What happens to a protest?)

Marcos is asking for a recount in 21 provinces, 1 legislative district, and 5 cities – covering a total of 36,465 clustered precincts:

These areas reportedly experienced “instances of electoral fraud,” Marcos said in the executive summary of his protest.

Robredo garnered 6,870,903 votes in these areas, while Marcos got 3,908,688 votes. Robredo won in each area above except in Pangasinan, Isabela, Cebu City, Leyte, and Zamboanga del Sur.

Pangasinan and Isabela are in Marcos’ bailiwick, known as the “Solid North”, while Leyte is the home province of his mother and current Ilocos Norte Congresswoman Imelda Marcos. (READ: How regions voted for Robredo, Marcos in 2016 VP race)

Here’s a summary of Marcos’ allegations in these areas:

Marcos listed incidents of pre-shaded ballots, vote-buying, and some of his supporters not being allowed to vote because their names were reportedly not on the voters’ list.

Also, in all 27 areas, Marcos highlighted the “abnormally high number” of “unaccounted votes/ undervotes” for the VP race. Undervoting happens when a voter does not select anyone for an executive or legislative position, or picks less than the maximum number allowed for multi-person contests like the senatorial race.

This, he said, “is a manifest indication of an election irregularity” in the automated polls.

Robredo’s lead counsel Romulo Macalintal, however, argued during the canvassing of votes in Congress in late May that undervoting is normal in elections, and does not mean there is electoral fraud.

Further, William Yu of election watchdog Parish Pastoral Council for Responsible Voting (PPCRV) previously said that the behavior of voters with regard to undervoting had been essentially the same in the last two presidential polls.

Robredo responded to all these in her verified answer.

For instance, in Cebu and Bohol provinces and in Zamboanga City, Robredo said that Marcos’ allegations were “in general terms” and “did not provide a detailed specification of electoral frauds, anomalies, and irregularities.”

For the remaining areas, here’s how the Robredo camp responded:

The Robredo camp pointed out issues with the witnesses themselves, saying that some of them weren’t registered voters in the areas where they supposedly witnessed poll fraud. (READ: Robredo camp: Marcos Jr’s witnesses are fake)

They also observed that most of the affidavits submitted were pro forma or “fill in the blank” templates. In 20 areas, Robredo said that the affidavits were notarized on the same day, with some notarized in Metro Manila, outside the provinces involved in the protest.

In addition, they contended that there were “no reports of any of the untoward incidents and irregularities” received either by the boards of election inspectors (BEI) in the polling precincts or by the local offices of the Commission on Elections (Comelec). These incidents, they argued, were also not in the Minutes of Voting filled out by the BEIs on Election Day.

The Robredo camp included a counter-protest, wherein she identified 13 provinces where “instances of vote-buying, threats and intimidation, substitute voting and incidence of unaccounted votes in the bailiwicks of protestant Marcos” were said to be reported:

Marcos won in CAR and the Soccsksargen regions, in Bataan and in Sulu, while Robredo prevailed in the Western Visayas region.

Lawyer Vic Rodriguez, counsel and spokesman of Marcos, criticized Robredo for including a counter-protest, after her camp supposedly claimed there was “no cheating” in the VP race.

“What’s the real purpose of the counter-protest? She filed so that they could have a semblance of control in the proceedings,” he argued. (RELATED: Marcos to Robredo: Why are you afraid of vote recount?)

He added that the counter-protest was filed out of time. Rodriguez also argued that there is a “disconnect” between the Robredo camp’s claims about not having enough funds for her legal defense and being the biggest spender among the candidates in the 2016 vice presidential race.

The Robredo camp, in an email to Rappler, said it was filed on time. The Supreme Court affirmed this in February 2017.

Just like in Part 1 of this story, we look into the election “fingerprints” of all areas involved in both camps’ protests.

The horizontal axis represents voter turnout in each precinct, while the vertical axis represents the percentage of votes received per precinct by the winner in the province/city. Dots or points that cluster at, or cluster near, the upper right corner could be indicative of possible cheating in the area or very strong support in the candidates’ bailiwicks.

This is the case for Camarines Sur for Robredo and Abra for Marcos – where fingerprints are near the upper-right corner of the chart. The same goes for provinces in their respective protests where they won, like Pangasinan and Isabela for Marcos, and Capiz for Robredo. In a statement on June 16, Rodriguez explained that Camarines Sur – Robredo’s home province – was chosen as among the Marcos camp’s “pilot areas” for a recount because it was “highly improbable” she would obtain over 80% of the votes there “when all of the other vice presidential candidates were either from the Bicol Region or had ties in the said region.”

As for Iloilo, Rodriguez pointed out that Robredo also obtained a huge vote share there, when Marcos’ standard-bearer the late senator Miriam Defensor Santiago, is from the province, and the Santiago-Marcos tandem was “warmly received by the Hiligaynons during their sorties there.”

Finally, Negros Oriental was also a “pilot area” because the number of votes that Robredo got there was “dubious, considering the fact that Marcos was supported by the biggest political families in the province.”

To recount or not to recount?

In her counter-protest, the Robredo camp argued that Marcos’ allegations “do not necessitate the opening of ballot boxes” for a revision or recount.

They also said that incidents reported in a few barangays or by the witnesses “are not representative of the entire” town or province.

For his part, Rodriguez maintained that Marcos is the rightful winner in the VP race, on account of numerous poll irregularities, as well as issues with the automated election system, which the Marcos camp claims to have contained anomalies and constitutional infirmities.

These, Marcos said in his protest, explain the need for the manual recount and “judicial revision” of votes, as well as examination of the ballots and election paraphernalia. – Michael Bueza, Gemma Mendoza, and visualizations by Russell Shepherd and Mabeth Añonuevo/Rappler.com