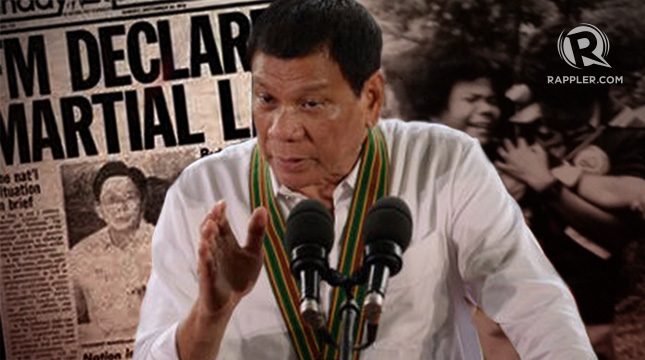 Facebook Twitter Copy URL
Copied
Since October 2016, Duterte has mentioned martial law in his speeches at least once a month. What exactly has he said about the thorny issue and how is the public to understand his often contradictory remarks?

MANILA, Philippines – President Rodrigo Duterte has managed to be alarmingly vague and contradictory about one thing Filipinos are especially sensitive about: martial law and the curtailment of democratic freedoms.

In Cabanatuan City in Nueva  Ecija on Wednesday, January 18, Duterte said he believed there was no “compelling reason” in the “peace and order situation now” to declare martial law.

In the same speech, however, he floated the rising threat of ISIS as a possible reason for him to make the declaration in the future.

His double-speak about martial law began even before his presidency. In the 2016 presidential campaign, he was fending off accusations he would become a dictator. Declaring martial law would be an insult to his mother, a Yellow Friday movement activist, he said.

Never mind that a few months before – in fact, even before declaring his presidential bid – Duterte admitted his regime, if he runs and wins, would be “a dictatorship.”

What exactly has Duterte said about martial law? Since October 2015, or a month before declaring he would run for president, Duterte has spoken about martial law in at least 11 different ways.

Here are the times the President has brought up the thorny issue and left the public confused and alarmed every time.

Before #EDSA30 anniv, #Duterte says he won’t be a dictator even if he admires some Marcos programs. #PHVote pic.twitter.com/oWK3nPsaiB

October 4, 2016 – He has been “tempted” to declare martial law because of the extent of the drug problem but settled on declaring a state of lawlessness instead because martial law is “not feasible.”

November 15, 2016 – Martial law is only a “contingency against widespread violence.”

December 1, 2016 – Martial law is “kalokohan (nonsense)” because anyway it did not improve people’s lives during the Marcos regime.

December 23, 2016 – The 1987 Constitution should be amended so that only the President has the power to declare martial law. This is the first time Duterte expresses disdain for the constitutional provision that guards against the abuse of martial law. He gives a mysterious assurance that there is a “safety measure.” “I’ll just tell you later,” he quips.

December 30, 2016 – Declaring martial law is “futile” and will only “burden the innocent.”

January 14, 2017 – He will declare martial law if he “wants to,” if the situation in the country becomes “virulent,” never mind what the Constitution says.

January 18, 2017 – He agrees there is no compelling reason to declare martial law at the moment but warns of the looming threat of ISIS in Mindanao.

What does he really mean?

A perusal of the stories published in the last few months about Duterte and martial law shows he has been mentioning this topic more often lately.

On the campaign trail from 2015 toward mid-2016, he would mention martial law and dictatorship every few months, likely because he had to speak about other issues and campaign promises during sorties.

But after his first mention of martial law in August as President (a mention within a thinly veiled threat at that), he began to bring it up every month from October 2016 to January 2017.

Former Commission on Human Rights chairperson and martial law victim Loretta Rosales finds it alarming that Duterte so frequently brings up martial law, often even without any provocation from media.

“First of all, you don’t toy around with the idea of martial law as chief executive, especially in a country like the Philippines where martial law was experienced for 40 years,” she said.

There is also an observable progression in how detailed his voiced insights have become. Before December 23, 2016, he made alarming but fleeting mentions of martial law. But on December 23, he devoted more words and analysis, even delving into the constitutional provisions on it.

It seems the President, for some reason, felt a need to revisit the legal basis for the declaration of martial law and voice his conclusion to the public – that the existing provisions about martial law should be changed so the president has sole power to declare it.

To his mind, the post-Marcos Constitution was only a “reckless reaction” to the Marcos dictatorship.

The provisions – requiring Congress approval, reporting of the President to Congress, and empowering citizens to question the legal basis of martial law declaration – are not so much safety nets for a public jealously guarding its democratic freedoms, but obstacles to a president who requires swift action during times of emergency.

But Rosales, who was tortured and raped during the Marcos regime, said the provisions “were deliberately placed there to ensure there is no abuse of executive authority by the executive in using martial law to perpetuate himself in power.”

“The executive can’t declare martial law unilaterally to make sure the President is accountable to people through representatives in Congress and the Supreme Court,” she added.

How to reconcile Duterte’s recent statements with his previous remarks about being only a hardliner on crime and not a dictator? About his belief that martial law did not improve lives?

Note that a lot of these “disclaimers” were said months; even a year ago. A man, especially one like Rodrigo Duterte, can change his mind.

We heard his most recent “disclaimer” on Wednesday, January 18, when he agreed with the military there is “no compelling reason” at the moment to declare martial law.

But journalists covering his speech that day found it difficult to say he completely denied plans to declare martial law, because of what he said right after the “disclaimer.”

“There is no compelling reason really, but I will just fill you in as the days to come. It’s ISIS, is coming in very fast and itong (this) Mindanao is a pure case of rising nationalism,” he said.

What to make of this “but”? Does he mean he could declare martial law if the ISIS threat grows?

Presidential Spokesman Undersecretary Ernesto Abella interprets Duterte’s recent statements this way: he could declare it but right now he won’t.

“[The President] has said if conditions are ripe, it will happen but he will not [declare martial law]. He is simply saying at this stage, he will not,” said Abella on Thursday, January 19, during a Palace news briefing.

Duterte’s statements have been so confusing that even the government’s lawyer, Solicitor-General Jose Calida was prompted to declare to media: “Sometimes, what you hear from him is not really what he wants to communicate.”

The act of declaring martial law “in case of invasion or rebellion” is in itself not unlawful because such a power is in the Constitution.

But what should cause alarm is Duterte’s apparent disdain for the safeguards against martial law abuse that are also in the Constitution.

Duterte has previously said he will “honor” the Constitution since it is the only thing that “binds” Filipinos of all regions, cultures, and religions.

Duterte is firmly behind moves to amend the 1987 Constitution to allow the country to shift to a federal system of government and to loosen some provisions seen as hampering economic development. But given his scorn for martial law provisions in the charter, will he try to take those out too?

If this happens, what safety measures can the Filipino people count on to guard against a repeat of the Marcos dictatorship?

The public awaits the President’s next remarks on martial law with hopes they will be clearer. – Rappler.com