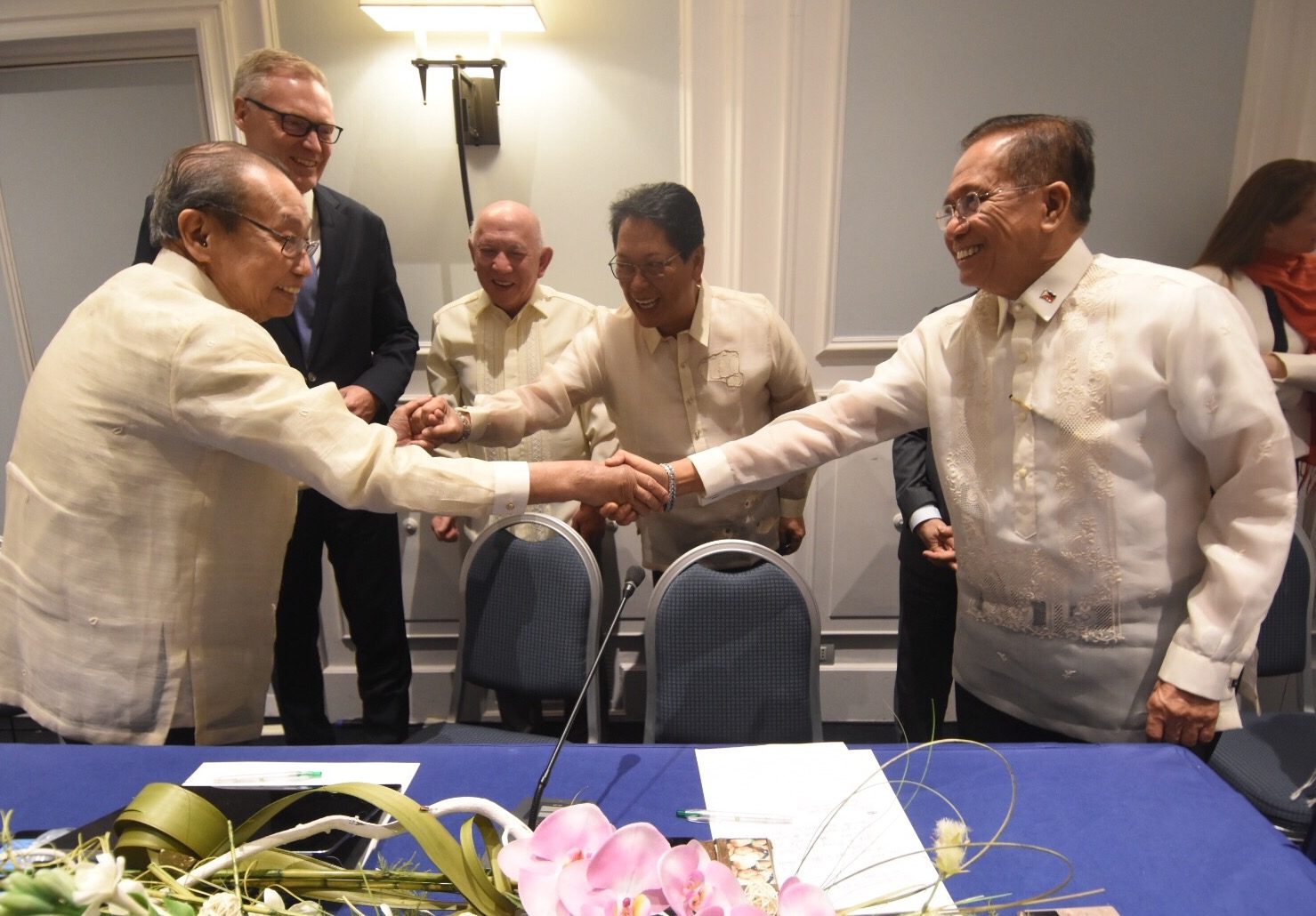 Facebook Twitter Copy URL
Copied
Government and NDF negotiators begin talks on CASER, the 'heart and soul' of the peace process that seeks to draw a roadmap to address widespread poverty in the Philippines

The hardest part of the negotiations begins. It will require painful compromises from both camps, if the talks are going to be successful under President Rodrigo Duterte.

The peace talks also need widespread public support or risk suffering the fate of peace deals that were only rejected in the end. The deals will require passage of new laws in Congress and amendments to the 1987 Constitution.

The National Democratic Front (NDF) envisions to draw a roadmap to providing more jobs, looking out for the welfare of the working class, improving the economy and, ultimately, making the country capable of standing on its own without aid from the US and Japan, in particular. (READ: Duterte’s talks with NDF: The meat of the matter)

Land reform and national industrialization are the two key issues the two panels began discussing in Rome and will be the focus of meetings to be held in Manila or in neighboring countries in the succeeding months. (READ: PH, NDF make significant headway in talks despite clashes)

The NDF is pushing for new policies to spur an agricultural revolution nationwide. It wants to break up plantations that escaped earlier laws on land reform, and then distribute them to farmers who will be given generous government support to ensure that they earn profits. The New People’s Army (NPA), the armed wing of the Communist Party of the Philippines (CPP), could find a new role as enforcers and implementors of agrarian reform.

The NDF is also proposing policies to ease out foreign firms from key industries, particularly mining, while shifting government priorities to pour money into developing the country’s own capability to extract its rich natural resources and process them into finished products. It believes in the country’s potential to be a global player in the steel industry, for example.

These are capital-intensive ventures that the NDF said could be financed by, among others, reducing military spending and imposing higher taxes on the rich.

This is not all. The NDF wants to ban US military forces in the Philippines at a time when the two countries are implementing a new agreement allowing the military superpower to build facilities inside Philippine military bases.

It wants to review international trade agreements for possible amendments, suspension or termination. It wants to ban open-pit mining, monocrop production for export, and logging for export.

All these, among others, are detailed in the September 2016 NDF draft for the talks on the Comprehensive Agreement on Socio-Economic Reforms or “CASER.” Rappler obtained the 18-page draft from the NDF.

CASER is the jargon that represents the “heart and soul” of the peace talks, the agreement that is supposed to address the root causes of conflict. It is the second of the 4 substantive agenda or themes to be negotiated before a final peace deal is achieved.

If CASER talks succeed, the armed struggle is supposed to end. CASER is the reason why the government has agreed to release political prisoners and the rebels agreed to an unprecendented ceasefire – to make the environment conducive for the difficult talks ahead.

But critics of the NDF proposals have dismissed them to be utopian and thus unrealistic, casting doubts on the talks that have been on and off for the last 3 decades.

The panels will have to prove them wrong. 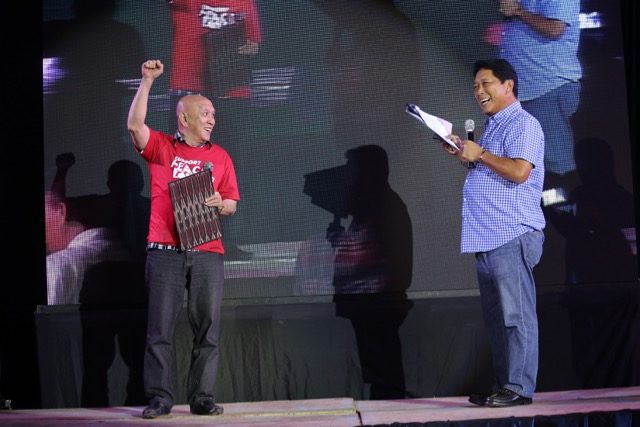 The government panel said the talks will be successful under the leadership of Duterte, a former student of CPP founder Jose Maria Sison who serves as NDF’s chief political consultant.

Duterte had referred to himself as a socialist and has turned the US into a punching bag while warming ties with China and Russia.

But the devil is always in the details.

Separate interviews with Duterte’s chief negotiator, Labor Secretary Silvestre Bello III and his counterpart in the NDF, Fidel Agcaoili, before CASER talks started in Rome show differences on how the two panels intend to implement these policies.

“They have their own version and we have our own. We have to blend,” Bello told Rappler.

The questions are: How far is Duterte willing to meet the rebels on these issues, and is the NDF willing to give up some demands in order to reach a compromise?

This is the difficult task that the Norwegian facilitator of the talks, Ambassador Elisabeth Slattum, reminded the two panels during the 3rd round of talks in Rome.

“A peace process is not a zero-sum game where you have one winner and one loser. A successful peace process is one where both parties come out on the winning side. Neither side will be perfectly content,” Slattum said.

The challenges are compounded by government policies that the rebels oppose  and an ambitious timeline that they have imposed upon themselves. (READ: War on drugs, Marcos revival hurting talks – NDF)

The two panels agreed they could complete talks on CASER within the year. The NDF also demanded the  immediate implementation of agreed reforms – the implementing laws should be passed, for example – before it could sign a final peace deal.

Key to their contention is the continued tension in the distribution of Hacienda Luisita in Tarlac that was run by the Cojuangco-Aquino family. It is one of the sugar plantations that Agrarian Reform Secretary Rafael Mariano, one of the nominees of the NDF to the Duterte Cabinet, declared he will audit to make sure that farmers really own and occupy the land distributed to them. (READ: Agrarian reform chief ‘Ka Paeng’: Hope for the farmers)

“The essence is destroying the structure of feudalism so that peasants can be liberated from serfdom and allow them to earn their own income so they become consumers of finished products made by local industries,” Agcaoili told Rappler.

Bello acknowledged that certain issues will be difficult. “For example, they would advocate for free distribution of land. That is not possible. That is not land reform. We have to negotiate that,” he said.

Bello said free distribution of land may be possible if it involves land owned by the government. “When you talk about arable land owned by land owners, you cannot do that. It will be confiscatory.”

The NDF also wants the country to take control of running key industries, particularly mining. “Imbes na hinahayaan mo ang Amerikano (Instead of allowing the Americans), Canadians, and now the Chinese, to get our natural resouces and bring them sa kanilang bansa (to their countries) because they need it for their industries. And then they sell us whatever [end product they produce out of it],” said Agcaoili.

“Why can’t we do that? The moment we can do that, we offer jobs,” he added.

Critics of the NDF find this proposal extreme, citing the lack of funds and local expertise to develop very technical industries such as mining.

Agcaoili argued this is precisely why the Philippines should focus on developing foreign partnerships that will facilitate technology transfer and will agree to help the Philippines develop its own capability. He cited how China supposedly purchased old steel mills – importing it lock, stock, and barrel – to grow its steel industry to now become one of the world’s biggest.

Bello said the proposals have been studied and there are “approaches to this proposition,” but he did not elaborate.

Key to this, Agcaoili added, is the need to veer the Philippines away from its traditional trade allies, or ending treaties with the US while grasping “other opportunities” offered by BRICS countries Brazil, Russia, India, China, and South Africa.

“I don’t think it will be a difficult issue after we have listened to our President’s position” said Bello.

But it is easier said than done. The local big players, who may have the capability to develop these industries, are the same oligarchs that the rebels are protesting against because they are not necessarily the most responsible ones.

The panels know the peace talks cannot be confined to the negotiating table. The general public will ultimately have to support the final peace deal between the Duterte government and the NDF. (READ: Norwegian facilitator ‘cautiously optimistic’ about PH, NDF talks)

“The peace process needs the patience, support, and involvement of the Filipino people,” said Slattum.

Slattum brings into the talks her experience in peace negotiations between the Colombian government and FARC rebels that led to a historic peace deal meant to end the longest-running armed insurgency in the West. Colombian voters, however, rejected the Norway-facilitated peace deal, which had to be renegotiated before it was ratified by the Colombian Congress.

It will benefit the talks if negotitators heed these hard lessons. – Rappler.com