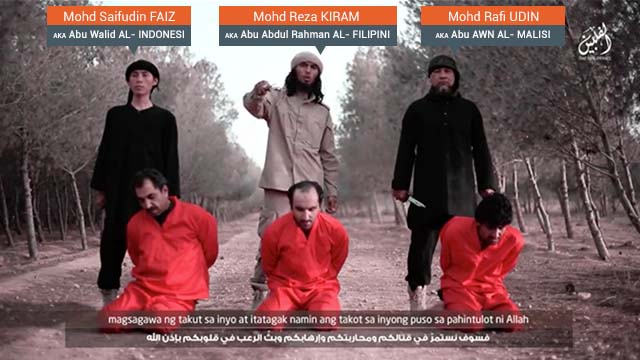 MANILA, Philippines – He is a millennial – the only identified Filipino fighting in Syria for ISIS, the Islamic State in Syria and Iraq, also known as IS, ISIL or Daesch.

On June 21, 2016, he appeared in a 20-minute video released on pro-ISIS Telegram accounts, calling on Muslims to join the jihad. The Filipino, along with an Indonesian and Malaysian, spoke in their native languages and urged Muslims to fight in Syria or the Philippines.

“If you cannot go to [Syria], join up and go to the Philippines,” said the Malaysian.

The Filipino urged his “brothers” to be strong.

The men then beheaded 3 Caucasian males, whom they claimed were “spies of the crusader alliance.”

Now classified documents obtained by Rappler name the Southeast Asians, including the only identified Filipino fighting in Syria for ISIS. Mohammed Saifudin Faiz is from Indonesia; Mohammed Rafi Udin is from Malaysia.

The lone Filipino is 26-year-old Mohammad Reza Kiram. His passport photo below is verified by the Philippine National Police. 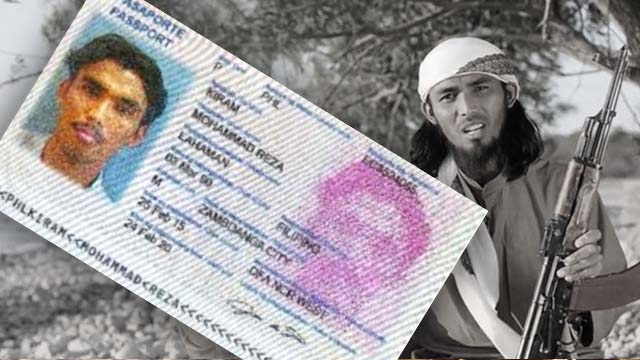 Born in Zamboanga City, Kiram travelled with his wife and daughter to Syria in 2015, according to a confidential Interpol report dated December, 2016.

Turkish officials confirmed their arrival at Istanbul’s Ataturk Airport on May 20, 2015. Authorities from at least 3 countries, including the Philippines, say they are now in Raqqa.

Arrests in Malaysia this week spotlight a new ISIS terror cell using Sabah as a transit point to funnel recruits from Southeast Asia and South Asia to the southern Philippines, evidence that Kiram’s rallying cry last June is now being carried out.

AKP and the death of Tokboy

AKP pledged allegiance to ISIS in a YouTube video in 2015, largely believed to be the group in a video distributed in November 2015 threatening the APEC Summit in Manila. It was globally distributed by ISIS propaganda sites. (READ: ISIS’ global ambitions and plans for Southeast Asia)

Its influential leader, Mohammed Jaafar Maguid or “Tokboy”, was killed in Sarangani earlier this month. Under him, AKP operated throughout central Mindanao and maintained operational links with Indonesian group, MIT or Mujahidin Indonesia Timur, perhaps the most aggressive ISIS affiliate in Indonesia. Both groups once worked together under JI, once al-Qaeda’s arm in Southeast Asia.

The Philippine police and military continue operations until today against the AKP and another closely-affiliated group which also pledged allegiance to ISIS, the Maute group. 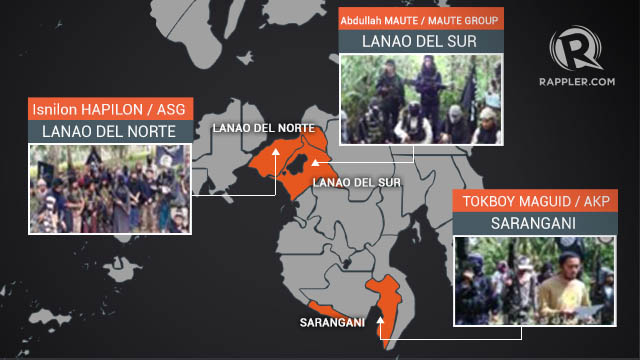 ISIS and the Maute group

The Philippine police verified Rappler’s early analysis that the Maute group, led by Abdullah Maute, is behind the September 2, 2016 bomb detonated at a night market in Davao City, killing at least 14 people and injuring at least 70.

An Interpol document obtained by Rappler estimates the Maute group has about “90 members who possess various small arms and – as demonstrated by the Davao City bombing – the capability to make Improvised Explosive Devices (IED) with military munitions.” 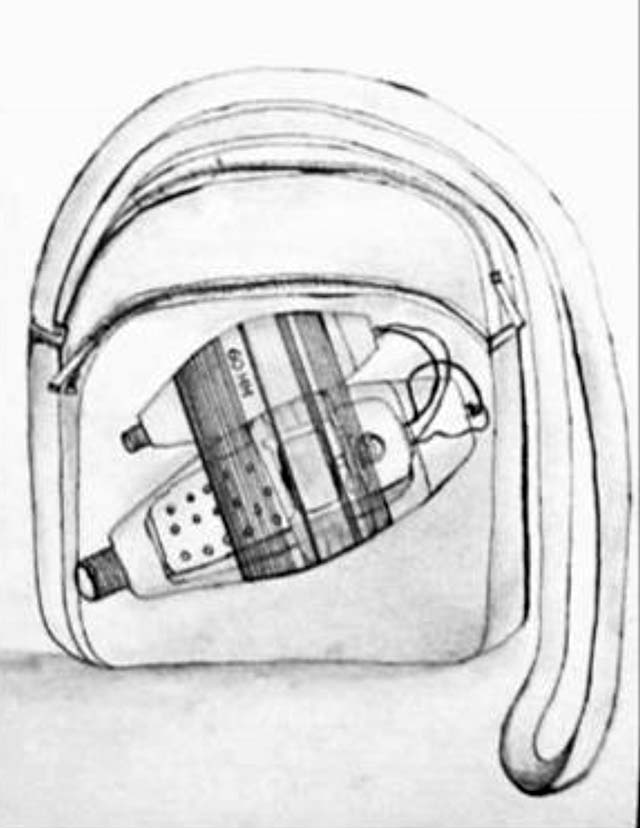 Philippine authorities also said the IED from Manila was similar to the one used in Davao City in September.

Which brings us back to the sole Filipino identified with ISIS in Syria. A little more than 6 months ago, Mohammad Reza Kiram’s video appealed to Muslim recruits to join the jihad in the Philippines.

Operations in Southeast Asia intensified since then, with ISIS setting up transit cells and conduits to bring foreigners to the Philippines.

Rohan Gunaratna, head of the International Centre for Political Violence & Terrorism Research, said at least 10 Malaysian terrorists are in the Philippines and have established Katibah Al Muhajir or Battalion of Migrants in the Philippines.

Gunaratna said the new battalion, composed of Malaysians and Indonesians, was created because Southeast Asian recruits couldn’t travel to the Middle East. Filipino intelligence sources say this group is working with Isnilon Hapilon, the senior ideological leader of the Abu Sayyaf.

Last year, Isnilon became the consolidated leader of at least 4 groups that pledged allegiance to ISIS. (READ: ISIS to declare a province in Mindanao?)

“While it has not been formally declared as a province or wilayat, ISIS has endorsed an Abu Sayyaf leader, Isnilon Hapilon, as amir for Southeast Asia, and Southeast Asians in Syria have pledged their loyalty to him,” stated an October report by the Jakarta-based Institute for Policy Analysis of Confict (IPAC).

On Thursday, January 26, Philippine Defense Secretary Delfin Lorenzana told a press conference that ISIS is communicating directly with Hapilon, who moved from his base in Basilan to Central Mindanao last December, joining the Maute group and AKP there. Operations intensified this week.

“Mayroon silang contact ngayon (They’ve made contact). One of the leaders in Basilan, Isnilon Hapilon, moved to Central Mindanao allegedly on the behest of ISIS people in the Middle East to find out if Central Mindanao is more conducive to the establishment of their wilayat (province),” Lorenzana said.

Still, there are victories.

On January 13, 2017, Malaysian police announced the arrest of a 31-year-old Filipino watch seller and his Malaysian co-conspirator and fiancée from Kota Kinabalu, Sabah. That uncovered a terrorist cell allegedly receiving orders from the southern Philippines.

According to a press statement by Inspector General of Police Khalid Abu Bakar, the Filipino was the cell’s chief recruiter, taking instructions from Hapilon and a Malaysian with him, Dr Mahmud Ahmad.

A former Universiti Malaya lecturer, Ahmad trained at an al-Qaeda training camp in the late 1990s and is now deeply entrenched with the ISIS, according to Malaysian officials. He recruited and arranged for Malaysians to fight in Syria as early as March, 2014, including Malaysia’s first suicide bomber, Ahmad Tarmimi Maliki.

“With these arrests, the Special Branch crippled a new Daesh terror cell that planned to make Sabah a transit point for terrorists from Southeast Asia and South Asia to infiltrate into the Philippines,” Khalid said, referring to ISIS as Daesch, its Arabic acronym.

“ISIS seems to be everywhere,” President Duterte told me at the end of last year, warning that the group is focusing on Southeast Asia as it loses ground in Syria and Iraq.

Duterte is the first president to admit the presence of ISIS, a stark contrast to the repeated denials of the military and the past administration.

He warned of recruitment from schools, saying he feared some of his own relatives may have been lured by ISIS. The recruitment is backed by the research of Indonesia’s IPAC.

“There is some evidence that the Maute group and the AKP have been able to use the appeal of the ISIS brand to attract university students. The more extremists in Mindanao can attract educated and computer-savvy cadres, the greater the likelihood of cross-regional contact,” the IPAC report stated.

Kiram is a cautionary tale: a Filipino millennial now fighting in Syria with ISIS. – Rappler.com