Feb 2, 2017 11:06 AM PHT
Camille Elemia
Facebook Twitter Copy URL
Copied
The government also seeks the removal of VAT exemptions, except those covering senior citizens and persons with disablity, to counter loss in revenue 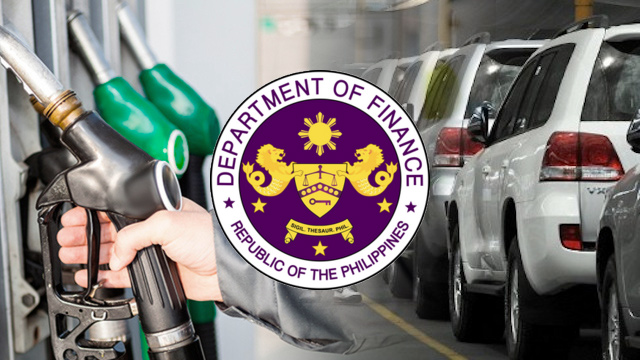 MANILA, Philippines – President Rodrigo Duterte, as early as the campaign, had vowed to lower the income tax rates shouldered by working Filipinos.

Easier said than done, though, as taxes form an integral part of governance that help provide social services to citizens. A balancing act is needed to cater to both the welfare of taxpayers and government.

In line with Duterte’s promise, the Department of Finance submitted its first proposal to the House of Representatives in September. The initial package of reforms, the first of 4, included the lowering of the personal income tax rates and the reduction of value added tax exemptions to counter revenue loss.

The DOF, however, revised its proposal after the public and private sectors opposed the imposition of an immediate imposition of high taxes on fuel and cars. Many people also criticized the removal of VAT exemptions for senior citizens and PWD, prompting the agency to submit its amended proposal on January 17.

According to congressional rules, tax measures are mandated to originate from, and be passed in, the House of Representatives before it goes through Senate scrutiny.

The DOF and the Bangko Sentral ng Pilipinas said the lowering of income taxes and the subsequent increase in excise taxes would only have a “negligible” effect on the country’s inflation rate or the rate by which the prices of goods and services increase.

“Why the impact on inflation is muted or moderate or modest is because the proceeds of the tax initiative will go back in terms of infrastructure, social spending, protection of the poor. In short, higher potential of the economy,” said BSP Deputy Governor Diwa Guinigundo in a Senate hearing on Tuesday, January 31.

The current laws on income taxes were drafted two decades ago in 1997. The Philippines currently has the second highest personal income tax (32%) and highest corporate tax (30%) rates among ASEAN countries. (READ: Why PH has 2nd highest income tax in ASEAN)

This is the present tax scheme in the country, according to the Bureau of Internal Revenue: 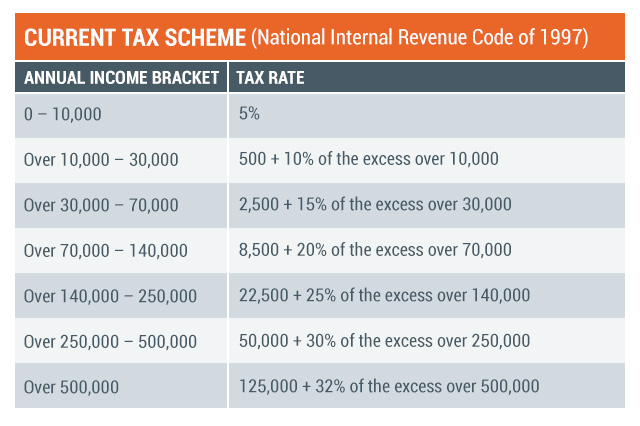 The new proposal now seeks to exempt employees who earn P250,000 or below annually from income taxes. On top of this, the mandated 13th month pay of up to P82,000 and other bonuses will still be tax-free. 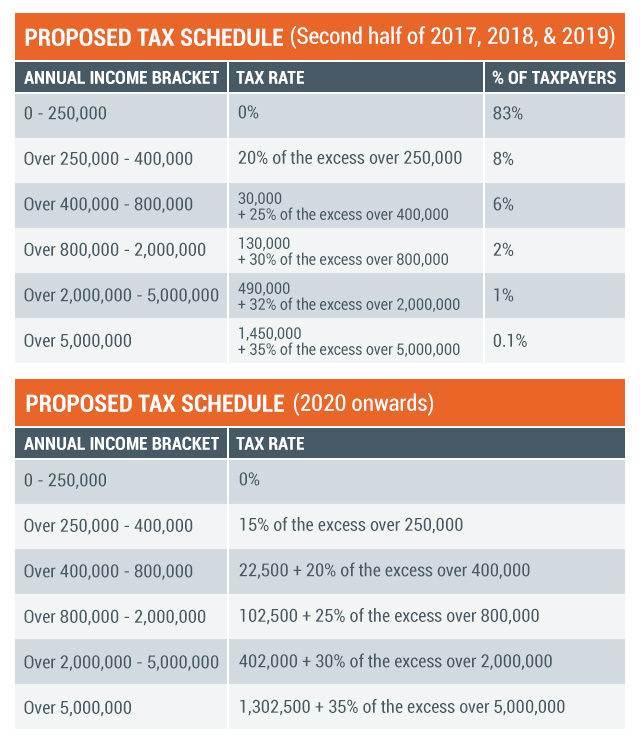 So far, no lawmaker has opposed the need to lower income tax rates. The problem lies in the methods that should be used to counter its effects on government revenue.

The DOF, in its proposal, wants to remove the following VAT exemptions:

Some senators opposed the DOF’s proposal. Senator Joseph Victor Ejercito criticized the planned removal of VAT exemptions for low-cost and socialized housing, saying it might lead to more housing backlogs.

Senator Juan Miguel Zubiri, for his part, questioned why the DOF wants to remove the tax exemption for cooperatives.

“Do we want to make the Philippines more attractive so that we have more jobs? And reverberate to the countryside? Or heavily tax these people?” Zubiri said.

“The coop sector contributes to national development and the economy. In 2010, we contributed 3.12% of the GDP. We also help in tax collection. Coops have withheld taxes amounting to P3.9 billion in 2015. Cooperatives have been assisting people in [the] grassroots,” it said.

The DOF, in response, said cooperatives already benefit from other tax exemptions available to them other than VAT.

Earlier, the government also wanted to remove the VAT exemption of senior citizens and people with disability but it was met by criticism in and out of government. They changed their plan and submitted a revised proposal instead.

To try to shield poor families from the initial shock of changes, the DOF has proposed a P300 monthly dole out to “poor and vulnerable households.”

To further address the loss of revenue due to the lowering of income taxes, the government has proposed to update excise taxes on fuel products.

The DOF said oil excise is a “highly progressive tax” since those who consume more will pay more taxes.

According to a DOF staff’s “estimate” using data from the Family Income and Expenditure Survey of 2015, it is the top 10%, or around two million households, that consume more than half of the fuel in the country.

The same study said that the top 1% of Filipino households consume 13% of fuel.

The DOF, further defending its proposal, cited past instances where petroleum prices were high but did not stop the Philippine economy from flourishing.

“Even if we had the highest prices of petroleum in 2008, in 2011, our economy continued to grow up to 7%,” Finance Undersecretary Karl Kendrick Chua said.

Here are the proposed tax rates for fuel products:

This means that for a P32-per-liter of diesel, a P3 tax will be imposed this year, should the measure be passed into law.

Senator Angara, chairman of the Senate ways and means committee, is not sold on this, saying, the tax rates on fuel products are high.

“Mukhang hindi pa tempered. (It looks like it isn’t tempered yet.) I think Congress will do it. I think the fuel taxes are a little high. Medyo yun siguro baka magbago pa yun. (Maybe that part could still change.) I’m pretty confident it will move downwards,” he said on Tuesday, January 31.

“If we add fuel excise tax, this will have a large impact on electricity prices in the poor areas of the country,” he said.

The DOF said the increase in power rates would be at least P42. Even then, Chua said, they could reintroduce the “pantawid kuryente” program to the provinces.

On the effect on passengers, Chua said there is only a minimal P0.21 increase in jeepney fares for a P3 tax imposed on diesel.

To help public utility vehicle drivers adjust, the government is keen on giving out “pantawid pasada” discounts similar to what former president Gloria Arroyo did.

The government will also implement jeepney modernization programs, the effectiveness of which is yet to be seen, as this has been pushed in the past but to no avail.

The DOF said the tax rates on automobiles have not been adjusted or updated for the past 13 years. As such, they decided to use the industry to help gain revenue in exchange for workers’ lower income.

This is progressive, said Chia, as the more luxurious cars will be imposed with higher taxes. But he added that if the increase in take-home pay would be considered, the prices would remain “affordable” to Filipinos.

Here are the proposed excise tax rates on automobiles: 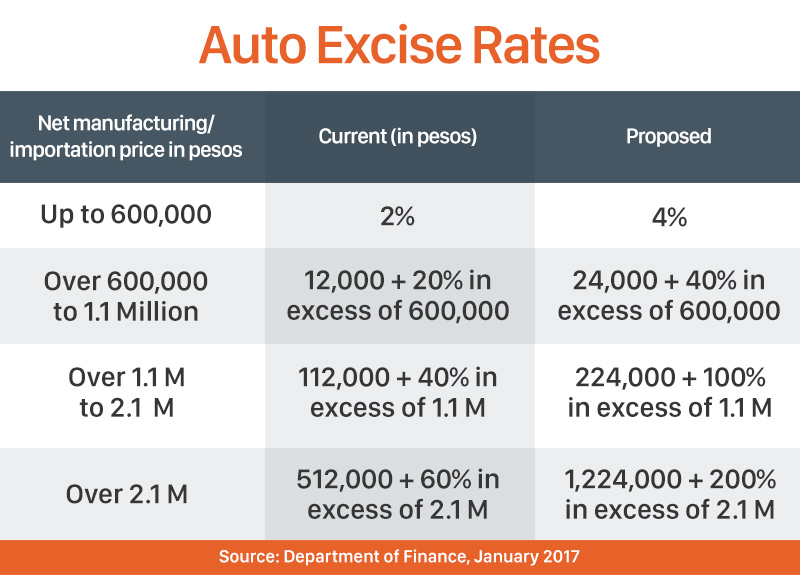 For top of the line models, the increase in prices once the measure takes effect is almost P1 million. 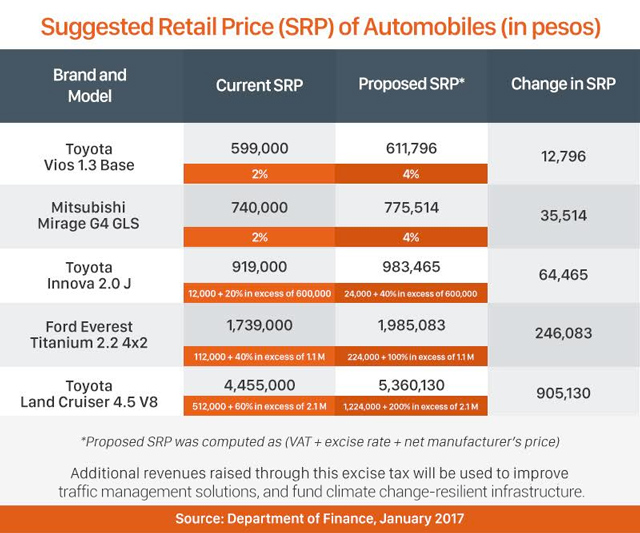 But Senator Zubiri has reservations about this tax scheme, citing the need for vehicles in rural areas where agriculture is the main industry. He criticized the proposal for discriminating against the poor and middle-class.

“If it’s luxury goods, as a matter of fact, we have the highest pricing of luxury vehicles here, kayang bayaran ng mayayaman yan (the rich can pay for that). Yung mahihirap, yung lower end utility vehicles, hindi (The poor, who use lower end utility vehicles, cannot). Coming from an agriculture rich province, many people ride pick-up trucks. Many people utilizing it are worried about the effect of excise taxes on those goods. It will really affect the poorest of the poor and the middle class,” Zubiri said.

While the measure seeking to lower income tax rates are gaining ground in the Senate, some have expressed reservations that the increase in excise taxes, coupled with the limitation on VAT exemptions, would just be shouldered by the poor in the end.

(We know that not all Filipinos have jobs. Many rely on their meager salaries. Because of that we know that the additional taxes on fuel products would burden many Filipinos.)

Whatever the outcome of the debates in Congress will be, one thing is for sure: the public will watch them closely. They will make their voices heard during the 2019 midterm elections. After all, several senators and lawmakers handling the measure are sure to seek reelection. – Rappler.com