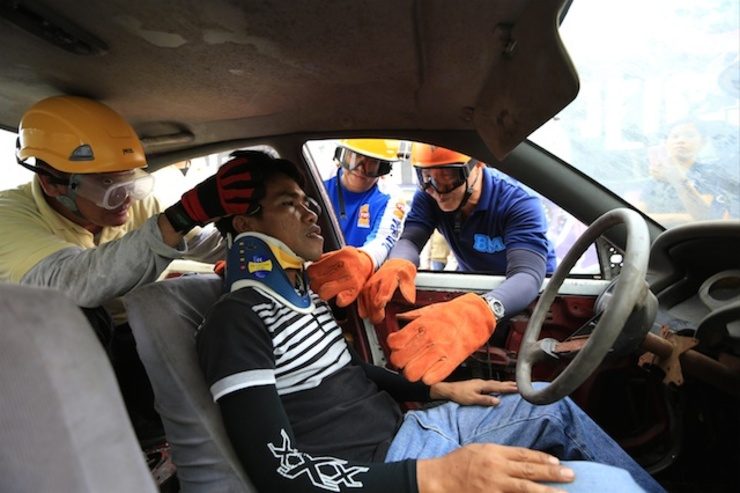 MANILA, Philippines – Since 2013, three cities in Metro Manila have consistently topped the list in terms of number of road crashes recorded in their jurisdictions: Quezon City, Manila, and Makati.

The 3 cities have posted double-digit figures in the number of road incidents in 2015 alone, data from the Metropolitan Manila Development Authority (MMDA) show.

The number of road crash incidents in the 3 cities comprise 51% of the total 95,615 crashes recorded between January to December 2015 in the capital region.

Data from the Metro Manila Accident Recording and Analysis System (MMARAS) also showed that while most of the road crashes reported every year happened during day time, the crashes that end up deadly mostly occurred at night and in the early hours of the morning.

Among the local government units (LGUs) of Metro Manila, Quezon City recorded the most number of road crashes in 2015 with a total of 27,529 incidents.

Meanwhile, the municipality of Pateros is considered the safest in terms of the number of road crashes, with only about 31 crashes recorded throughout 2015. Four of these resulted in injuries and 27 damaged properties.

The map below shows the distribution of road incidents in Metro Manila. To navigate, click a shape and information on the city or municipality will be displayed. Darker shades mean more crashes in the area.

Quezon City leads the LGUs in terms of car crash incidents, comprising about 28.8% of the total incidents in 2015. Of the LGUs, it also has the most number of fatalities, taking 146 lives in 2015. There were 4,466 injured individuals and about 22,917 damaged properties.

Next to Quezon City are the cities of Manila and Makati with some 11,101 and 10,173 incidents respectively. In Manila, 83 of these incidents were fatal, while 1,338 resulted in injuries. In Makati, only 19 were killed and about 969 sustained injuries. The rest of the reports involved damage to properties.

The MMDA said that the high number of incidents in these cities can be attributed to high social and economic activities happening in the area. The metro’s major roads – EDSA, Commonwealth Avenue, Quezon Avenue, Roxas Boulevard, and Radial Road – are also located in these cities.

These 3 cities remain consistent in posting the highest number of crash incidents since 2013.

Among the Metro Manila LGUs, Pateros recorded the lowest number of car crashes – only 31 for 2015. There were no recorded fatalities and only 4 were injured throughout the year. The rest involved damage to properties.

Following Pateros is Navotas with a total record of 730 incidents in 2015, of which 12 were fatal and 211 involved injuries. Malabon, meanwhile, had 1,095 car crashes: 5 died while 418 sustained injuries.

These LGUs are considered the safest in the metro since 2013. According to the MMDA, these can be attributed to their smaller land area and the absence of major arterial roads crossing these LGUs.

Meanwhile, MMARAS data showed that most fatal road crashes occur at night and in the early hours of the morning.

But of the 411 fatal incidents recorded, most happened at night: 277 cases compared to 134 cases in the daytime.

The same trend can be observed in the 2014 and 2015 data, but with the number of total fatal crashes increasing by over 100 incidents in the 2015 data.

In its 2015 report on road safety, the World Health Organization (WHO) said that most of the road crash victims in the Philippines are motorcycle riders and pedestrians.

The WHO also noted that the Philippines has laws regulating speed limit, mandating the use of motorycle helmets and seatbelts, and prohibiting drunk driving, but these have not been sufficiently implemented.