No ‘endo’ in 2017? Challenge of ending labor contractualization 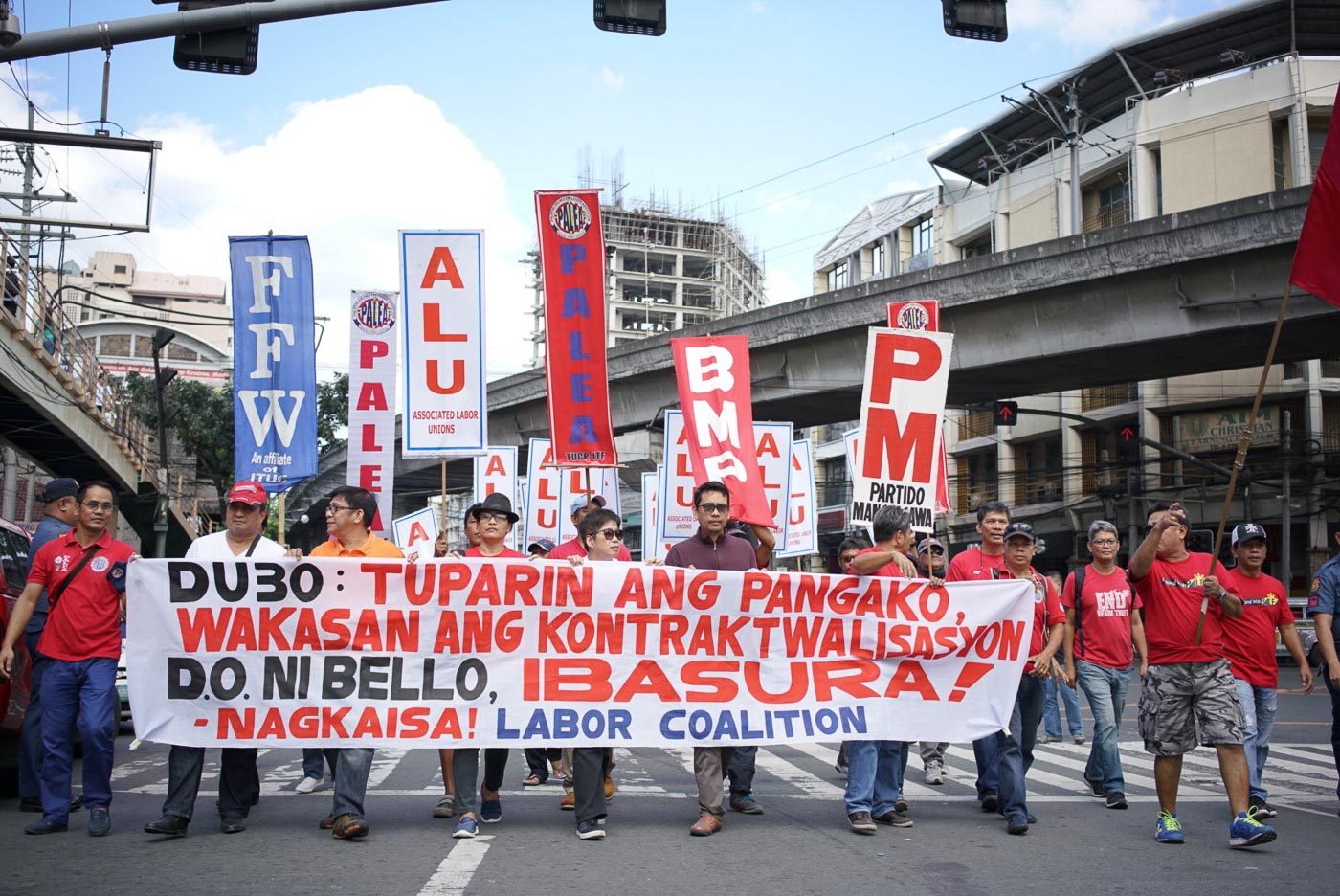 MANILA, Philippines – Ending the illegal practice of perpetually hiring workers on a contract-basis – more popularly known as labor contractualization – was among the most popular campaign promises of President Rodrigo Duterte.

The employment scheme that started during the Marcos era has plagued Filipino workers for decades due to the lack of job security and mandated benefits such as leaves with pay, bonuses, and in some cases, social security.

Before Duterte assumed office, the Department of Labor and Employment (DOLE) had pegged the number of contractual workers at 1.3 million.

Labor Secretary Silvestre Bello III promised to end labor contractualization, often called “endo” (end of contract), by 2017 as part of his 8-point agenda. Under his leadership, DOLE has been able to regularize around 36,000 workers by yearend of 2016.

But labor groups lamented this is barely 1% of the number of contracted workers based on DOLE’s own figures. Given this pace, can government abolish “endo” this year?

“That’s if we are talking about ‘endo’, illegal contracting, madugo iyon (it will be difficult),” he clarified.

The labor executive was referring to the 5-5-5 scheme of employers which involves the renewal of workers’ contracts every 5 months to avoid regularization. Labor laws provide for a worker’s regularization after 6 months of employment.

University of the Philippines professor Dr Virgel Binghay said outsourcing has become a global trend among businesses to reduce cost. It has led to abuse because “greedy employers” resort to it to escape the burden of increasing a worker’s pay and providing benefits.

The practice proliferated under the past administrations because they have been economy-centric.

Labor lawyer Allan Montaño emphasized that “endo” also covers those hired illegally by manpower agencies. This is referred to in the law as labor-only contracting. DOLE earlier said there are around 677,000 agency-hired workers, but Say clarified that not all of them are illegally contracted. (READ: After Day 100: How Duterte gov’t can fight contractualization better)

The Labor Code of the Philippines, under Article 106, allows employers to forge an agreement with contractors to do jobs necessary, but not central, to business operations. Department Order 18 (DO 18) spells out the rules in contracting.

DO 18 states that there is legal contracting when a contractor has a substantial capital or investment and the agreement among the parties comply with labor rights and benefits.

Labor groups see this as the root cause of the proliferation of manpower agencies or firms that provide workers only, and not the full job order, which may include the provision of raw materials or equipment.

Montaño said agencies are able to circumvent the law because of the weak provisions on labor-only contracting.

“The requirement [for a business] not to be considered engaged in labor-only contracting is that the service provider must [either] have sufficient capital or an investment in the form of tools,” he said in Filipino.

“Those abusive service providers are those that have the capital but do not have the facilities or equipment so any time they could pull out,” he added. He also criticized the DOLE’s relaxed capital requirement of P3 million, proven only by a bank certificate.

DOLE is currently drafting a new policy that will replace DO-18. It was originally set to be released in December last year but labor groups opposed the draft measure because it orders agencies – and not the main employers – to regularize workers.

This prompted Bello to open the second draft to comments from both the management and labor sectors. Say said they are expecting to release it by mid-February, at the earliest.

While DOLE tries to balance the interests of all stakeholders, labor coalition Nagkaisa has been firm in its position to abolish all forms of fixed-term employment and stick solely to a direct-hiring scheme. Say said DOLE cannot grant this stringent appeal because contracting is allowable under the law.

Another reason, Binghay said, is the different nature of industries and work arrangements.

There are industries such as construction that employ workers only for a limited-time project. There are also workers who can negotiate their employment terms and who prefer to work on a contract basis to enjoy job flexibility to achieve the necessary work-life balance.

Currently, there are only 535 labor law compliance inspectors monitoring 950,000 business establishments. Say said they will be needing more people to achieve their goal of ending contractualization.

His request of 37 additional inspectors last August has already been approved by the labor secretary and they are now just awaiting a budget from the Department of Budget and Management to augment their manpower. The new appointments will all be plantilla positions.

By 2017, 65,000 employees can expect to finally be free of the abusive contractualization scheme. But what will happen to the big chunk of agency-hired workers will still be up to how DOLE will balance interests in reforming its labor policies. – Rappler.com