How serious is the Duterte administration about FOI? Facebook Twitter Copy URL
Copied
Among the agencies participating in the eFOI program, one agency stands out for being unresponsive to data requests – the Philippine National Police

MANILA, Philippines – Have you ever invoked President Duterte’s Executive Order on Freedom of Information?

Rappler did a couple of times. Some offices responded promptly, some took a while. But there was one agency we had problems requesting data from – the Philippine National Police (PNP).

On July 2016, President Rodrigo Duterte signed the landmark EO No. 2 which effectively allows the public to request for documents and records under the executive branch.

It took effect November 25 last year, alongside the launch of its online portal. Since then, interested citizens have been able to request for data directly from government offices or through its online counterpart. (READ: FOI to take effect on Nov 25: What you need to know)

The signing of the EO is a critical milestone for advocates. The fight started when the first bill was filed in 1992 at the House of Representatives. Twenty-four years later, the Philippines is finally implementing a measure towards full public disclosure.

Three months into implementation, has the government disclosed more information to the public?

From Rappler’s experience, some agencies did improve but there are those that remained laggards when it comes to requests for critical information.

Unfortunately, the agency that has not been complying with the executive order is the one at the center of the Duterte administration’s controversial “war on drugs”: the Philippine National Police (PNP).

In the government’s eFOI portal, the PNP tops the list of agencies with the most unanswered queries. All the 41 eFOI requests for information from the PNP remained unanswered to date.

After the PNP, the next agency with the most number of unanswered queries is the Land Transportation Office (LTO) with 15 unanswered requests.

The oldest of these unanswered requests was filed way back in November 25, when the executive order took effect. Most requests are about  crime statistics and data related to this administrations’ “War on Drugs” – the number of cases classified as Deaths Under Investigation, number of police killed during drug operations, number of drug users and pushers who surrendered to the PNP.

Blogger Noemi Dado is one of those who filed requests for information via the eFOI portal. She requested for updates on the progress on “deaths under investigation,” specifically: (1) the number of deaths already investigated, (2) progress on existing cases, and (3) any resolved cases.

“Sayang. (It’s a pity.) I wanted to prove that it is not EJK, that they investigate [these cases],” Dado told Rappler.

“If you notice I filed right away the day or two after eFOI was launched,” she adds.

As of the moment, statistics on requests invoking FOI but filed manually or through other means such as e-mail, phone call, or facsimile are yet to be known. Each agency will submit a report regarding implementation to the Presidential Communications Office sometime in April.

The table below shows the response rate of agencies to requests filed on the eFOI platform.  The “Response rate” column shows how responsive an agency is from 0% to 100%.

Ablan said they have asked the PNP for an explanation on why the agency has failed to respond to information requests. The PNP’s reason, he said, was that the staff assigned to the project has moved on to another post.

“That’s one of the principal reasons why they haven’t responded because the people we trained in November and December are no longer the people in charge. They carried the username and the password over [where they are currently assigned] and so they had to resend all the emails. Hopefully they [resolve] the issue,” he added.

“One of our learnings here, for agencies like the PNP, you cannot give us an official email address of a person. You have to create a separate email for [FOI-related assignments,]” said Ablan.

Shortly after the new FOI policy took effect, Rappler invoked the FOI in follow-ups to previous requests filed with the PNP for breakdowns of statistics on “war on drugs” victims.

Almost 4 months after the request was sent to the PNP Public Information Office (PNP-PIO), Rappler has yet to get a response, despite follow-up.

A request for a breakdown of crime statistics, which reiterated requests filed with the PNP before the FOI took effect, and invoked the new executive order, were likewise denied.

Over the phone, the PNP PIO informed Rappler’s researcher that they only release aggregated figures. Rappler has yet to receive a formal response on this matter despite our request for a written explanation for the denial of requests.

The data in Rappler’s story on the numbers of those affected by the drug war was all sourced from the Philippine National Police (PNP) PIO which is released through reporters covering the police beat. (READ: IN NUMBERS: The Philippines’ ‘war on drugs’)

Since the EO took into effect, all government agencies in the executive branch have been required to disclose information to the public. However, only 49 agencies are able to accept requests done through the online portal at the moment.

Ablan told Rappler that the communications office can only track the performance of agencies part of the eFOI portal in real time. They will have to wait for the reports submitted by agencies that undergo manual filing sometime in April to know how they fared.

As of this posting, the portal has received 592 requests since November 2016. Among the agencies, the Philippine Statistics Authority (PSA) garnered the most number of requests at 94, followed by the Department of Health and the Department of Budget and Management with 86 and 69 requests respectively.

Ablan said that PSA is among the best performing agencies. Apart from having good records management, the statistics bureau responds almost immediately to requests.

“PSA is one of the few agencies that embraced [FOI] because they understand the importance of putting out information,” he said.

According to Ablan, the first 3 months were nothing short of “birth pains.”

“We conducted trainings. We felt that they understood everything but we learned that not all agencies are created the same,” he shared.

Ablan said that implementing the EO was not an easy feat, especially for departments with a number of attached agencies.

The Department of Transportation (DOTr), for example, realized that they will not beat the number of days required to respond if all requests for attached agencies have to go through them.

“The DOTr is the first agency to realize the scale of responding within 15 working days. Asec Cherie Mercado asked us train all 15 attached agencies to be part of eFOI. Can you imagine a request under the DOTr that pertains to something only the Marina [Maritime Industry Authority] knows? They have to go through all the processes until it goes down to Marina. She said, ‘We cannot handle all requests.'”

FOI Engagement Lead Michelle Manza also shared that records management is one of the problems encountered by some agencies. 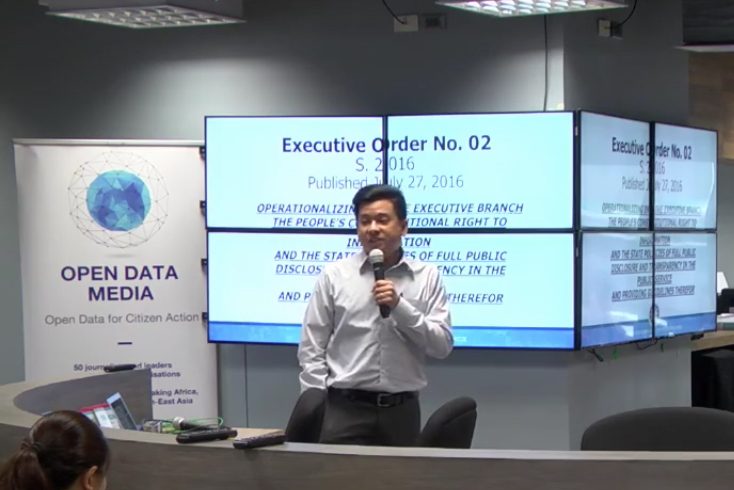 The law requires all government offices to conduct a review and create an inventory of all public records. However, not all agencies have a masterlist of all the data they have and whether these are available for public access, according to Manza.

This problem affects the agency’s efficiency on rolling out information, said Ablan.

“The National Archives can direct an agency to submit the inventory list of public records,” Ablan said. He adds, however, that they were having difficulties with compliance.

“With the FOI, agencies finally realize that it will benefit the FOI process if agencies review what information they have,” said Ablan.

The EO requires an agency to respond within the allowable number of days, 35 working days at most. If deadlines are not met, concerned officers could face administrative charges.

Officers-in-charge of delinquent agencies will be reprimanded on the first offense, suspended for up to 30 days on the second offense, and removed from service on the third offense. (READ: Freedom of information: What’s lacking in Duterte’s EO?)

Ablan points out however, that an executive order is not enough.

He said that a law is necessary to mandate disclosure of information in the other branches of the government not covered by the executive order – the judiciary, Congress, local governments, and constitutional commissions.

Ablan also says that, in order for FOI law to be effective, there has to be an office who will monitor, supervise and address appeals for access to information. Information officers will also need to be appointed for each agency. This, he points out, requires money.

In the 16th Congress, the Senate easily passed the FOI on third reading because they removed the provision on the creation of an office that supervises over the implementation of the new law. “On the third reading, they took out the budgetary component. But we can’t take out the office.”

This office is needed, according to Ablan. “Lawmakers shouldn’t disregard that.” He said they have informed Poe and other lawmakers of this necessity. (READ: What happened to FOI under Aquino?)

“They thought before that each agency can actually implement FOI themselves, but we learned that they cannot. There has to be an office to supervise them,” he said.

Ablan concluded, “Hopefully our legislators listen to us.” – with Gemma B. Mendoza/ Rappler.com