Mar 11, 2017 10:00 AM PHT
Pia Ranada
Facebook Twitter Copy URL
Copied
With the recent celebration of International Women's Day, it's time to ask: Has President Duterte been good or bad for women empowerment? 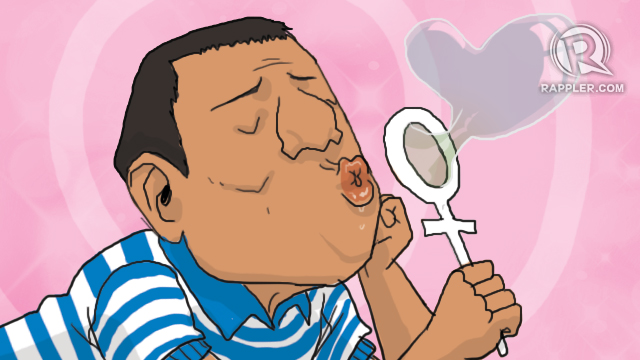 MANILA, Philippines – There’s no doubt about it, President Rodrigo Duterte is fond of women.

No speech of his goes by without him mentioning his admiration for the fairer sex. Just last Wednesday, March 7, he raved about how seeing a beautiful woman makes him two years younger.

(It’s good that every time I see a beautiful woman, my age lowers.)

He never fails to recognize the presence of a beautiful woman in a room, whether during a Miss Universe event or a meeting with widows and mothers of the Special Action Force 44.

Duterte has spared not even Vice President Leni Robredo from an observation about her smooth knees and short skirt.

During his presidential campaign, he locked lips with female supporters and even placed one of them on his lap for a photo opportunity. If you’ve seen the videos and photos, they are hard to unsee.

The world celebrated International Women’s Day on March 8. In his message for the occasion, the President called women “heroes” and declared his commitment to promoting gender equality.

Has President Duterte been good for women empowerment? How exactly does he view women?

Both his supporters and some women’s rights advocates laud pro-women programs in Davao City as proof that Duterte is a progressive leader when it comes to women empowerment.

There’s the Women Development Code of Davao City, the first such code by a local government unit. There’s the Violence Against Women help desks and free legal assistance for abused women. There’s the pioneer implementation of reproductive health programs, such as free tubal ligation for poor women.

He has his own Women’s Code in Davao. Why boast about that when you don’t actually practice it yourself?

The Philippine Commission on Women (PCW) recognizes Davao City as a model for protecting women’s rights.

“Davao City, for one, is our local learning hub where there are very good referral systems within the city. They have full-time lawyers who can help these women and we hope that other LGUs can follow suit with the good practices that these cities have,” said PCW Executive Director Emmeline Verzosa in a Palace news briefing.

As president, Duterte greenlighted some noteworthy policies for women.

He signed Executive Order No. 12 requiring government to fully implement the Reproductive Health Act. In the Office of the President, he reconstituted the Committee on Decorum and Investigation to receive and probe complaints on sexual harassment.

Under his administration, women representation in government at least did not suffer, but neither has it improved significantly.

The Duterte administration is yet to meet the 50% target as set by the 2009 Magna Carta of Women. 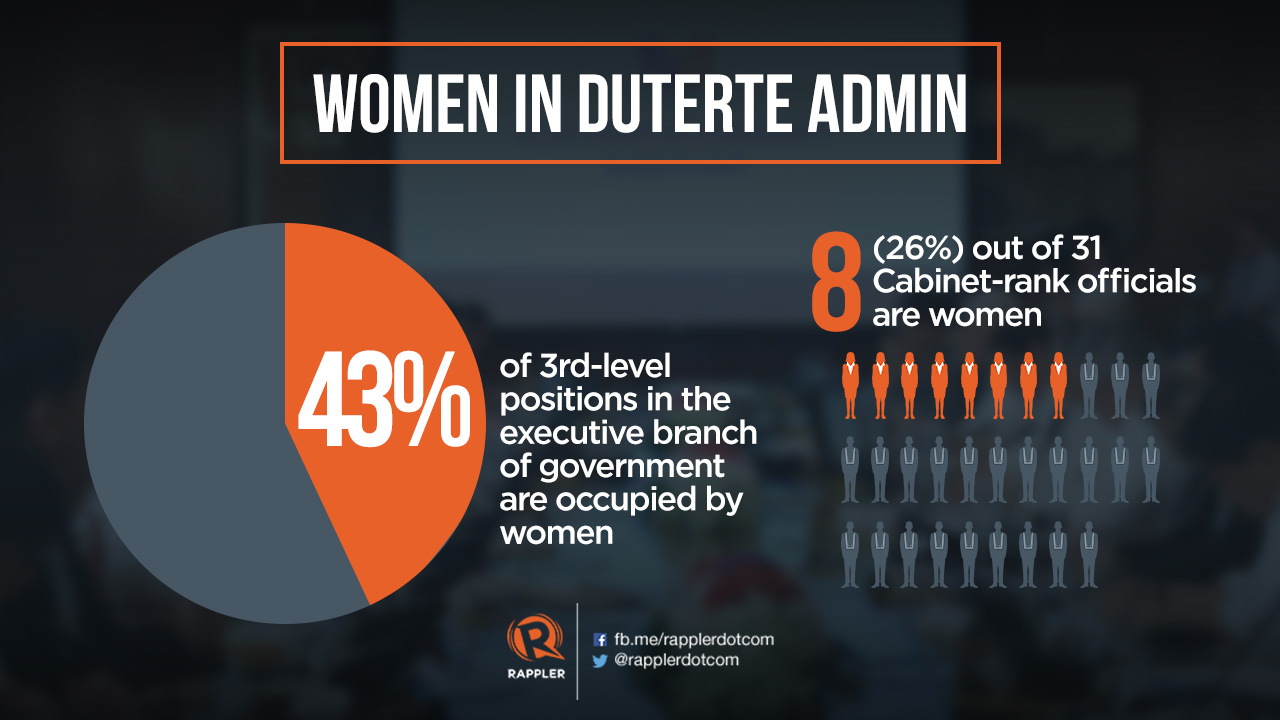 A look at his Cabinet shows a lack of representation of women. Out of 31 Cabinet-rank officials, only 8 or 26% are women, far from the 50% ideal.

Despite these policies, Duterte’s language about women has come across to many as offensive and damaging to the cause of gender equality.

Perhaps most infamous of his statements was his rape remark about an Australian missionary, when he declared it was a shame inmates of a Davao City penal colony were able to rape the Australian woman before he could.

But even as president, he continues to make side remarks and jokes that don’t sit well with some women’s rights advocates.

In his speech during a recent Palace event, he told a female official to “close [her] legs” because he was getting “distracted.”

While speaking to Super Typhoon Yolanda survivors in January, he joked that he had prayed for the storm to kill only the ugly people and spare the beautiful women.

“I think we have a misogynist leader,” Nikki Luna, an artist and women’s rights advocate, told Rappler.

Duterte’s pro-women policies do not excuse his “degrading” language because his language is in itself a setback for women empowerment, she said.

Luna was first enraged by Duterte when, as a presidential candidate, he boasted about having multiple girlfriends and using one of them for “short-time only.”

She knew he was bad news when, as president-elect, he whistled and catcalled a female reporter during a press conference.

Duterte’s supporters are quick to point out that these remarks are only jokes, with no malice intended. The President himself admits they are his way of endearing himself to the masses and loosening up a tense situation.

True enough, his remarks about women always elicit laughter from his audience, whether rich or poor.

But Luna said the very act of dismissing his remarks as jokes only perpetuates the idea that making jokes at the expense of women and their bodies is acceptable and normal.

“If your core message ends up offensive to women, then there’s a big problem. These little comments he makes, it leads to conditioning of this mindset,” said Luna.

“He has his own Women’s Code in Davao. Why boast about that when you don’t actually practice it yourself? It doesn’t make sense. You’re a political leader. You’re supposed to set a moral standard for the rest,” she added. (READ: Davao’s policies on women clash with Duterte’s macho lingo)

He respects women. He would never abuse them or take advantage of them.

Luna thinks Duterte’s attitude toward women is already influencing others and becoming a characteristic of his administration.

She pointed out the congressional hearings that “slut-shamed” Duterte critic Senator Leila de Lima. During the House hearing, congressmen fixated on her sex life, infamously making fun of the “intensity” of his relationship with her driver Ronnie Dayan. (READ: ‘Kailan kayo nag-climax?’: Nonsense questions at the Bilibid drugs hearing)

During the 2016 campaign season, Duterte supporters cyberbullied women rights advocate and Duterte critic Renee Karunungan. They called her pokpok (whore), wished that she would someday get raped, and asked her how much she would charge for a one-night stand.

Luna admits misogyny and sexism have plagued Philippine society long before Duterte came into the picture. But she thinks these have become “more blatant” now than ever.

“Here we have the most powerful person in the country who is supposed to protect us but then they are perpetrators of rape jokes or sexual innuendos, or saying catcalling is a compliment,” she said.

It all comes down to Duterte’s lack of appreciation of the danger of language.

But some women rights advocates support Duterte and are willing to give him a chance.

A former representative of women’s group Gabriela, Luz Ilagan, even appealed to Filipinos to “accept that our President is different” and that he is prone to exaggeration.

Perhaps no other women’s rights advocate understands Duterte more than his former chief of staff, Patmei Ruivivar, who was among those who championed Davao’s Women Code and VAW help desks.

In a previous interview, Ruivivar admitted Duterte needs work understanding women empowerment but insists he respects women. She has a special term for him: benevolent sexist.

“He’s sexist yes, but a benevolent sexist. He needs to work on that,” Ruivivar said.

“He’s not hostile. It’s not that he hates women, no. But he tends to be patronizing towards women – protecting them, worshipping them, putting them [on] a pedestal. But he respects women. He would never abuse them or take advantage of them,” she explained. 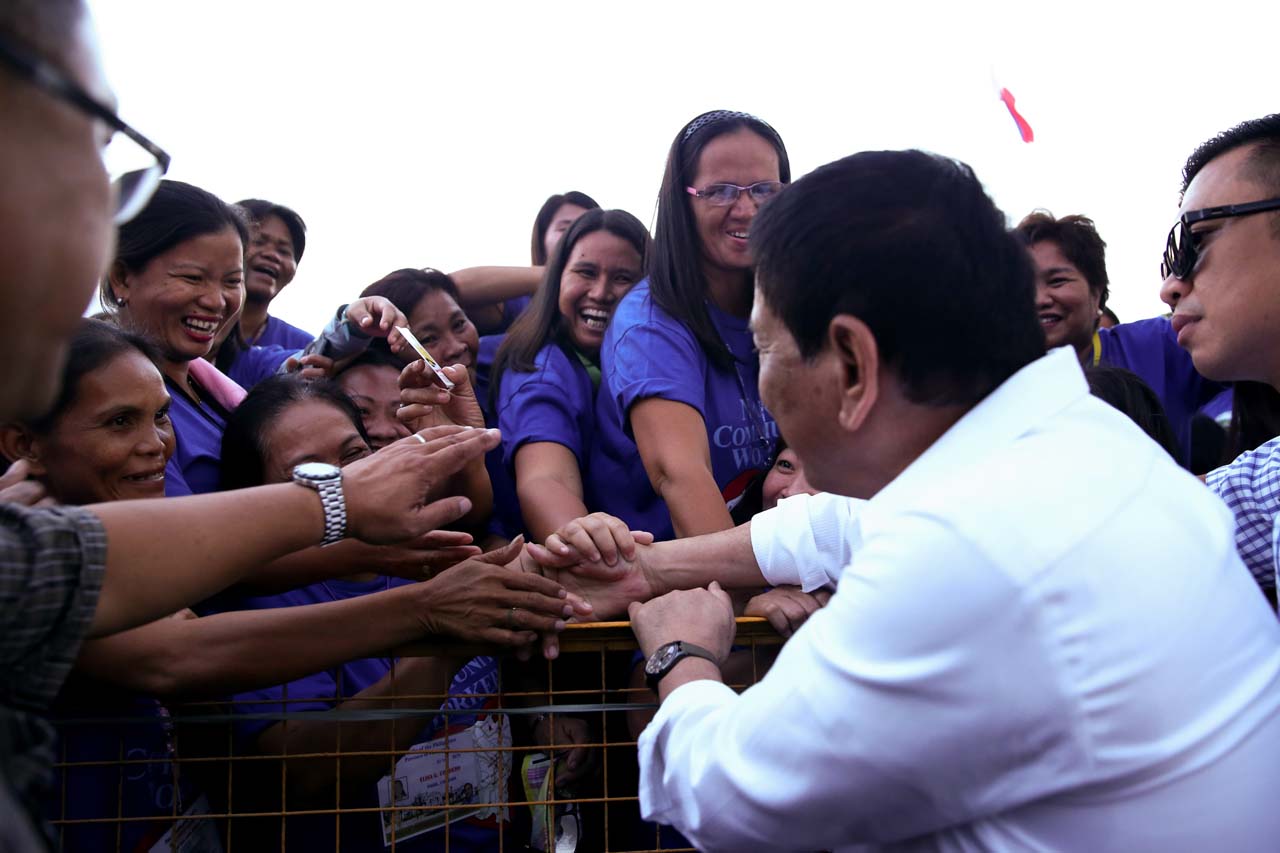 Ruivivar remembers all the times she would call out Duterte, then a mayor, every time he said something inappropriate about women.

Whether Duterte is a progressive thinker on women’s issues or not, it cannot be denied that he detests physical abuse inflicted on women.

To this day, Duterte always gets riled up when talking about young girls being raped or wives getting beaten up by their husbands.

In his days as mayor, he would listen to each abused woman who came knocking on his office door.

“Women, victims of domestic violence, rape, violence against women, they really want to come to see him in the office. They complained to him,” recalled Ruivivar.

When a particular case enraged him, Duterte would even take matters in his own hands. He would call the chief of a police station where the abuser was detained.

“He would say, ‘Don’t let him out or else I will put you in jail.’ Then after office hours, he would go there and threaten the abuser,” said Ruivivar.

Duterte’s tendency to see women as needing protection and his role as the protector, to go with his macho, iron-fisted public persona, has sometimes run counter to modern ideas of women empowerment.

For instance, his rule in Davao City is that local beauty pageants must not have a swimwear portion out of respect for women.

“When you have to police what women wear, that’s not advocating for women’s rights. It’s another patronizing face of misogyny,” said Luna.

She understands how challenging it must be for Duterte to understand new ideas about women empowerment.

Yet Duterte has been, and continues to be, surrounded by strong women, starting with his feisty mother Soledad Roa Duterte.

His own daughter, Sara Duterte, is no doormat (as he himself likes to remind people, with stories of how she punched a sheriff). Both his former wife Elizabeth Zimmerman and common-law wife, businesswoman Honeylet Avanceña, are independent women in their own right.

Luna thinks it would help if Duterte and other government officials, including lawmakers, go through “gender sensitivity training.”

It’s not clear if the President would ever subject himself to such training or if he would change if ever he did go through such, adamant as he is about staying true to his “identity.”

If he does not change, it will be up to Philippine society to stay on a path that truly liberates and empowers women. – Rappler.com