MANILA, Philippines – The gunman enters the casino, shoots indiscriminately, then sets fire to the gambling tables. Ultimately, smoke from the fire kills at least 36 people.

Yet, instead of escaping with a backpack of casino chips worth P113 million or about $2.3 million, the gunman killed himself in a manner reminiscent of suicide attacks.

“He burned himself inside the hotel room 510,” Philippine police chief Ronald dela Rosa told reporters. “He lay down on a bed, covered himself in a thick blanket and apparently doused himself in gasoline.”

Hours before authorities spoke, however, alleged ISIS member Semion Almujaheed, a member of the group that has taken parts of Marawi, claimed responsibility on a pro-ISIS channel.

This is the same account that posted the video of a priest held hostage in Marawi appealing for a troop pull-out on Tuesday, May 30.

Written in English and repeated in Arabic, the post said: “The lonewolf soldiers of the Khilafah attack the heart of Kufar city of Manila in Resort World.” (Read: Casino targeted with suicide attack because it’s ‘haram’ – ISIS)

When asked about this, Defense Secretary Delfin Lorenzana contradicted police statements, telling Rappler that “the police and intel people are investigating.” He added, “We are not yet ruling out that this is an ISIS act.”

Key to analyzing the threat accurately is understanding terror networks in the Philippines and Southeast Asia.

Lorenzana explained that in 2016, ISIS in Syria recognized Filipino groups as part of the terror group, the Islamic State, also known as IS, ISIL or Daesch.

As early as January 2016, Rappler outlined the consolidation of extremist groups pledging allegiance to ISIS in the Philippines under the leadership of former Abu Sayyaf leader Isnilon Hapilon, then based in Basilan.

“He was ordered to Lanao del Sur in early January to set up a wilayat (Islamic province) there,” Lorenzana told Rappler. “ISIS thought that Lanao del Sur was a better place for expansion because the area is bigger than Basilan, and there are more Muslims there. Since their recognition as part of ISIS, Hapilon has received funds from ISIS.”

In 2016, the groups consolidated in central Mindanao with a direct link to Syria.

Classified documents obtained by Rappler name the Filipino in ISIS in Raqqa: Mohammad Reza Kiram. In June 2016, he appeared in a video released in pro-ISIS telegram accounts. Kiram, along with a Malaysian and an Indonesian, beheaded 3 Caucasian males, and told jihadists that “if you cannot go to [Syria], join up and go to the Philippines.” (READ: Filipino millennial joins ISIS in Syria) Intelligence reports from the Philippines and at least two other nations show that foreigners and others who came to the Philippines in response to ISIS’ calls converged around the Butig area. Some of the foreigners were already in the country as part of what was then known as Jemaah Islamiyah, once al-Qaeda’s arm in Southeast Asia.

What separates ISIS from al-Qaeda is its successful capture of territory – a physical caliphate. As its forces weakened in Iraq and Syria, its propaganda pushed homegrown groups in other parts of the world to take territory.

The Maute Group, which calls itself “IS Ranao” held territory twice in 2016:

This set the stage for the taking of parts of Marawi, prompting the Philippine government to declare martial law in Mindanao on May 23. The Philippine military still has to regain full control of the city after more than 10 days of fighting.

“This is not a failure of intelligence; this is a failure to appreciate intelligence,” Rohan Gunaratna told Rappler. Gunaratna, the author of Inside al-Qaeda, is the head of the International Centre for Political Violence & Terrorism Research Centre in Singapore.

“We have written many reports about the developments of ISIS in Mindanao,” he said, “it’s time to plan, prepare, and to build a strategy to control, contain, isolate, and eliminate ISIS.”

From 2012 until today, we’ve shown the evolution of terror networks in the Philippines – from its links to al-Qaeda and evolution to ISIS.

By early 2017, Filipinos and foreign nationals were training in the Butig area. By March, former Abu Sayyaf spokesman Muammar Askali, who had also pledged allegiance to ISIS, had moved from Jolo to central Mindanao. From there, a joint group traveled by sea to Bohol to try to mount an attack last April, coinciding with high tourist arrivals and an ASEAN meeting. That was foiled by authorities.

ISIS in Raqqa documented a lot of these, like this slick propaganda video released on ISIS channels soon after the Bohol plot was foiled. It plants the ISIS flag on the Philippines, and in Filipino declares, “Ang mga Sundalo ng Khilafa sa Silangang Asya” or the Islamic fighters in East Asia.

It’s followed by video of training and fighting in central Mindanao – including the Maute Group’s brutal beheading of two Filipino sawmill workers in April, 2016. (This video was taken down on May 5). 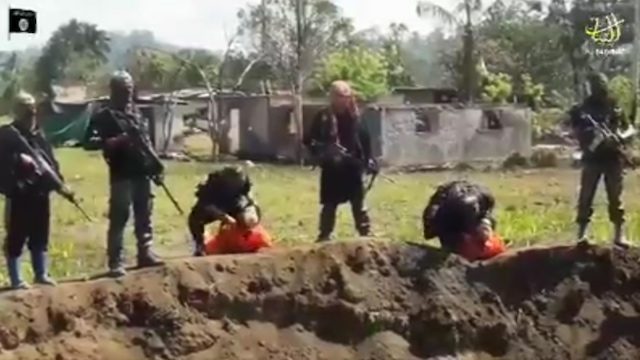 Indonesian extremists in chat rooms were pushing each other to travel to the Philippines, with one saying, “Don’t be a lion in the virtual world and a rabbit in the real world.”

Several hours after martial law was declared in Mindanao, ISIS in Syria released this video claiming its solders controlled parts of Marawi. What’s striking is that the photos show the Maute Group wearing helmets and vests and operating high-powered equipment. Philippine President Rodrigo Duterte and Lorenzana call homegrown groups ISIS. When will the rest of the country’s security forces do the same and align around a vision that can neutralize this threat? – Rappler.com