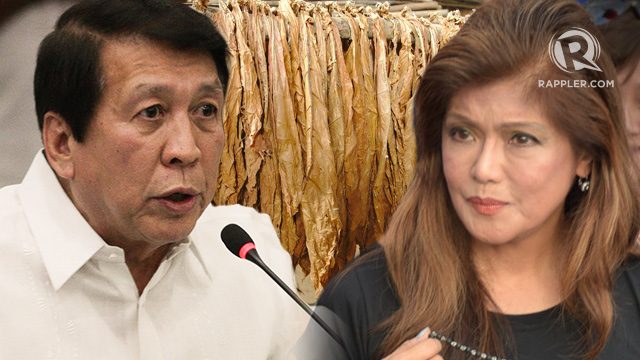 MANILA, Philippines – The spotlight is on Ilocos Norte Governor Imee Marcos, who is being accused of misusing the province’s tobacco funds to purchase motor vehicles.

Fariñas, former Ilocos Norte governor, showed copies of documents indicating P66.45-million worth of tobacco funds were used for the following:

The tobacco fund was created through Republic Act Number 7171, which mandates 15% of tobacco excise taxes shall be allotted for a special support fund for tobacco farmers in the identified provinces, mostly in the Ilocos region. (READ: FAST FACTS: Tobacco funds in the Philippines)

The law specified the money can be used only for the following:

The probe has since led to the detention of 6 Ilocos Norte officials for giving “dismissive” answers during the hearings.

A subpoena to appear in the next hearing on July 25 was also issued against Marcos, who was advised by her brother and former senator Ferdinand “Bongbong” Marcos Jr to ignore it.

If she fails to show up, she will be arrested by the House. (READ: House prepares detention room for Imee Marcos)

Marcos maintains the motor vehicle transactions were above-board because the farmers themselves had requested for the vehicles. But the House committee on good government and public accountability’s investigation has so far raised several red flags in the purchases. Information about the transactions was first relayed to Fariñas by barangay captains in his district. They said they were issued mini-cabs that did not have documents, leading to further problems.

“So nasisita sila, nahuhuli ng LTO (Land Transportation Office) dahil wala namang registration. Ang kanilang more urgent concern is sila ang nag-aabono sa fuel and oil ng mga vehicles (So the LTO apprehends them because they do not have registration. Their urgent concern is that they are the ones paying for the fuel and oil of the vehicles) because they could not use their budget in the barangay because these vehicles are not booked or documented as owned by the barangays,” Fariñas said.

He was able to secure copies of the purchase requests, obligation requests, disbursement vouchers, and checks used to buy the vehicles. But he said the original documents, stored at the Ilocos Norte capitol, disappeared ever since they initiated the probe.

“As soon as the resolution was filed for the investigation of these transactions, all the documents relating thereto were stolen from the COA office at the provincial capitol, and all the offices of the provincial treasurer, accountant, budget officer and development coordinator have destroyed all their files,” said Fariñas.

This was backed by Marilyn Llaguno, Commission on Audit (COA) supervising auditor for Ilocos who had audited the transactions made by the provincial government at the time.

Under oath, Llaguno told lawmakers during the first hearing on May 2 that she could not find the disbursement vouchers that were supposedly placed inside the document store room at the capitol.

Both Battulayan and Agcaoili wrote to Dela Cruz saying the originals of the documents were no longer in their custody because they were submitted to COA for post-auditing.

In a separate hearing, COA Chairman Michael Aguinaldo testified that only the documents relating to the purchase of the mini-cabs, secondhand buses, and Foton mini trucks were missing.

With only copies of the original documents available, can the House still push through with the investigation? Rule 128 of the Rules of Court says yes.

Section 5 states: “When the original document has been lost or destroyed, or cannot be produced in court, the offeror, upon proof of its execution or existence and the cause of its unavailability without bad faith on his part, may prove its contents by a copy, or by a recital of its contents in some authentic document, or by the testimony of witnesses in the order stated.”

Cornelio Viernos, a member of the team who audited the transactions for the secondhand buses and mini trucks, also testified during the investigation that Fariñas’ copies of the documents contained the same information as the original ones given to COA for post-auditing.

Ilocos Norte bought the 40 mini-cabs, 5 secondhand buses, and 70 Foton mini trucks through cash advances, a violation of COA Circular 92-382 which states that all disbursements by local government units should be made in checks, except in certain cases.

The document, issued on July 3, 1992, details the rules and regulations on accounting and auditing rules, pursuant to the Local Government Code of 1991.

Cash advances are only allowed in the following cases:

In the AOM, Rizalino identified the purchase of the 5 secondhand buses and 70 Foton mini trucks in 2012 as among the cash advances “not in accordance to the provisions of COA Circular 92-382.”

“We recommend that management should strictly observe rules and regulations on the proper granting of cash advances,” wrote Rizalino.

Documents from COA and the Philippine Government Electronic Procurement System (Philgeps) also show that Marcos authorized the release of money ahead of the completion of the bidding processes for the motor vehicles.

These documents were also submitted as evidence to the House committee on good government and public accountability.

The notice to bid for the secondhand buses – worth P15.3 million – was posted on May 24, 2012 in Philgeps. The Ilocos Norte provincial government gave interested bidders until June 14, 2012 to purchase the bidding documents.

But on the same day the notice to bid was published on Philgeps, Battulayan, Marcos, and provincial treasurer Calajate already signed a disbursement voucher authorizing the release of P15.3 million to buy 5 secondhand buses.

The check was immediately issued the next day, signed by Calajate, Marcos, and Genedine Jambaro from the Provincial Treasurer’s Office. This means the Ilocos Norte provincial government already authorized the release of P15.3 million even while the bidding process was still ongoing.

The same situation occurred for the purchase of 70 Foton mini trucks worth P32,550,000.

As for the 40 mini-cabs worth P18.6 million, Philgeps deputy executive director Maria Rosa Clemente told lawmakers they have no record of the bidding process for it in their system. The House committee on good government and public accountability had issued a subpoena for the following officials to appear during the hearing on May 29:

The 6 local executives were signatories to the purchase requests, obligation requests, disbursement vouchers, and checks for the purchase of the motor vehicles in question.

Fariñas asked them one by one to verify their signatures on the documents.

But they all had the same line: They cannot remember signing the documents anymore given the many transactions they had to process, even if the purchases in question amounted to millions of pesos. They then asked the committee if they could see the original copies so they could properly comment.

Fariñas had asked Jambaro if she remembers signing a check worth P15.3 million for the secondhand buses.

Jambaro replied: “Your honor, ‘di ko na talagang maalala sa dami ng transactions sa amin (Your honor, I really can’t remember because of the number of transactions we have).”

Gaor gave a similar answer when Fariñas asked her if she signed a cash advance for the purchase of mini-cabs.

“That was the exact same testimony given by [Jambaro]… Walang maniniwala sa ‘yo (No one will believe you),” said a laughing Fariñas.

The House panel then unanimously agreed to cite all 6 officials in contempt. They have been detained at the House Legislative Building since May 29. (READ: ‘Mastermind’ muzzling Ilocos Norte execs in House probe, says Fariñas)

But the House leadership refused to grant it, with Speaker Alvarez even calling the CA Special 4th Division judges “idiots.”

As for Marcos, she has already publicly indicated she is not too keen on appearing in the next hearing on July 25.

House committee on good government and public accountability chairperson Johnny Pimentel then spearheaded the preparations for her detention room.

“The Governor has already tried to explain in media interviews where the money went, how it was spent, and so on. Why can’t she just dutifully show up at our hearing, hand in the documents that her staff couldn’t produce, recount her remarks under oath, and submit herself to a proper cross-examination by the committee?” asked Pimentel. – Rappler.com