China wins vs U.S. at ASEAN Summit but loses on publicity

MANILA, Philippines – China continues its winning streak against the United States at the Association of Southeast Asian Nations (ASEAN) Summit and Related Summits held in the Philippines back-to-back with the Asia-Pacific Economic Summit (APEC) Summit in Vietnam.

It was all business and no fanfare for Chinese Premier Li Keqiang who came on behalf of President Xi Jinping. There was no serenading from President Rodrigo Duterte at the Summit, no obsession with his plane, and no extra attention over his selfie photo with Duterte’s aide Bong Go.

What Li had was a statement published in a daily newspaper, detailing how China wants to engage with ASEAN nations. On November 13, he sat down with Southeast Asian leaders for the 20th ASEAN-China Summit.

Li got things done in areas that matter: trade and security above all. He strengthened economic ties with the region while practically silencing protests over China’s militarization of the South China Sea.

China may have lost on publicity but it won on substance. (READ: ASEAN avoids hitting China in Chairman’s statement)

“The ASEAN Summit was a big win for China over all…. Ultimately, it was all showbiz [for Trump]. He has not really offered any substantial Asia policy,” China expert Jay Batongbacal told Rappler.

China will be unchallenged in the region in the foreseeable future, a former Filipino diplomat told Rappler.

“China has subverted the notion that ASEAN could be foil to its growing power and help US…. China is genius to have been able to turn everything in ASEAN going for it, partly because of Trump,” the former diplomat said.

China as champion of free trade

From APEC to ASEAN, China was the unusual champion of free trade as the US under President Donald Trump criticized “unfair trade” in the name of his “America First” policy.

“We expressed confidence that economic ties will continue to grow, supported by the further deepening of economic linkages. ASEAN leaders noted with satisfaction that in 2016 China remained as ASEAN’s largest trading partner,” said the Chairman’s Statement on the 20th ASEAN-China Summit released on Thursday, November 16.

ASEAN and China issued Statements on Tourism Cooperation and on Deepening the Cooperation of Infrastructure Connectivity. They also adapted a Joint Statement on Strengthening Anti-Corruption Cooperation.

“China continues its roadshow on what countries may gain from economically tying up with China. China is now the one promoting free trade while the US is going inwards. He’s not offered an alternative to China’s economic incentives,” Batongbacal said.

China is reviving the Silk Road – an intercontinental trade and infrastructure project – that will connect Asia with Europe and Africa. To push this, ASEAN and China issued the Joint Statement between ASEAN and China on Further Deepening the Cooperation on Infrastructure Connectivity.

The infrastructure projects will be funded through the Asian Infrastructure Investment Bank and the Silk Road Fund.

The US previously led an alternative trade deal – the Trans-Pacific Partnership (TPP) – meant to counter the fast rise of China in the region. Trump decided the US is abandoning 11 partner countries that are still working to push through with the deal. 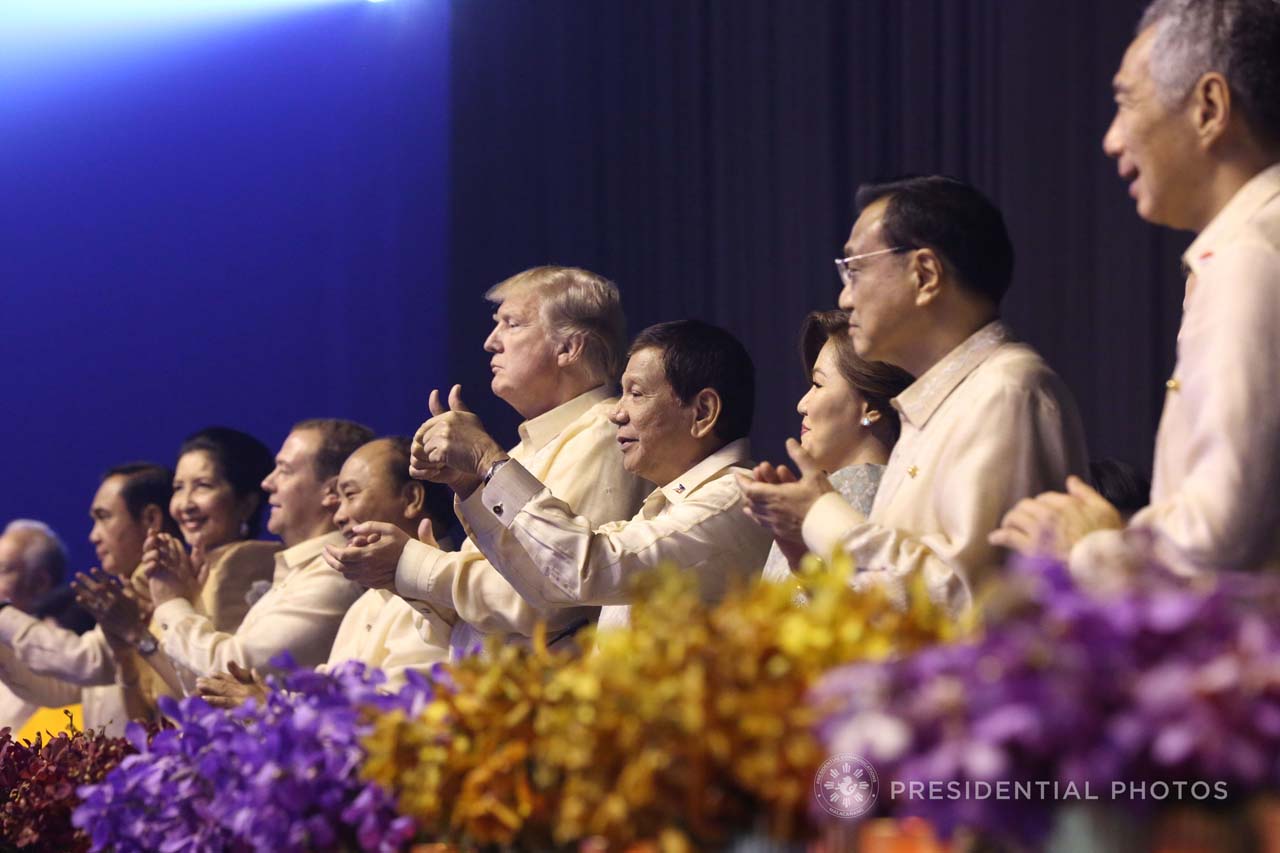 ASEAN and China announced they are starting talks for a Code of Conduct for the South China Sea, a vital trade route where China, Taiwan, and 4 ASEAN countries (Philippines, Vietnam, Malaysia, and Brunei) have overlapping claims. It comes after they agreed on a framework back in August.

“We noted that the Framework of the Code of Conduct in the South China Sea (COC) adopted by the Foreign Ministers of ASEAN Member States and China in August 2017 was an important step toward the conclusion of an effective COC,” it added.

But Batongbacal said the same announcement was made last year. “We’ve made mountains out of molehills. They agreed to start negotiations sometime next year. They also said that last year. There is no substantial progress,” he said.

China, which claims almost all of the South China Sea, has always been aggressive in the disputed waters. It has wrested control of maritime features previously occupied by other claimants, engaged in bloody encounters, and worsened the conflict when it reclaimed reefs and turned them into military bases.

ASEAN avoided China’s militarization of the disputed waters and instead celebrated “improving relations” with the neighboring military power.

What leaders concerned themselves with is the adoption of a Declaration for a Decade of Coastal and Marine Environmental Protection in the South China Sea.

Batongbacal said it appears that the maritime dispute is getting a “soft closure” from the ASEAN substantative agenda. ASEAN countries are willing to move on, failing to make China accountable for the militarization.

The ASEAN Summit used to be a venue to raise problems in the South China Sea. The Philippines, with the backing of the US, previously led moves to press for a strong statement against China’s aggression.

The regional dynamics drastically changed last year when the Philippines elected Duterte and the US elected Trump. Duterte declared the Philippines was pivoting to China, shelving the ruling, and is opting to manage the maritime dispute through bilateral talks. He also served as this year’s rotating chairman of the ASEAN Summit.

Trump meanwhile is seen to have abandoned the touted US pivot to Asia, a perception he was unable to change during his Asia tour.

The US president just wrapped up a trip organized around two major summits in Southeast Asia during which he visited three SCS claimants. Two things we didn’t hear: 1) A Southeast Asia strategy; 2) An SCS strategy.

There has since been no signficant push back against China, Batongbacal said. The Philippines has been accommodating China’s presence and operation in the West Philippine Sea. (READ: ASEAN, China: We can’t take calmer seas for granted)

China’s winning streak didn’t end at the ASEAN Summit. The ASEAN Summit was followed by Li’s official visit to the Philippines, where the ties continued to be strengthened by the US’ once most loyal ally in Asia. – Rappler.com