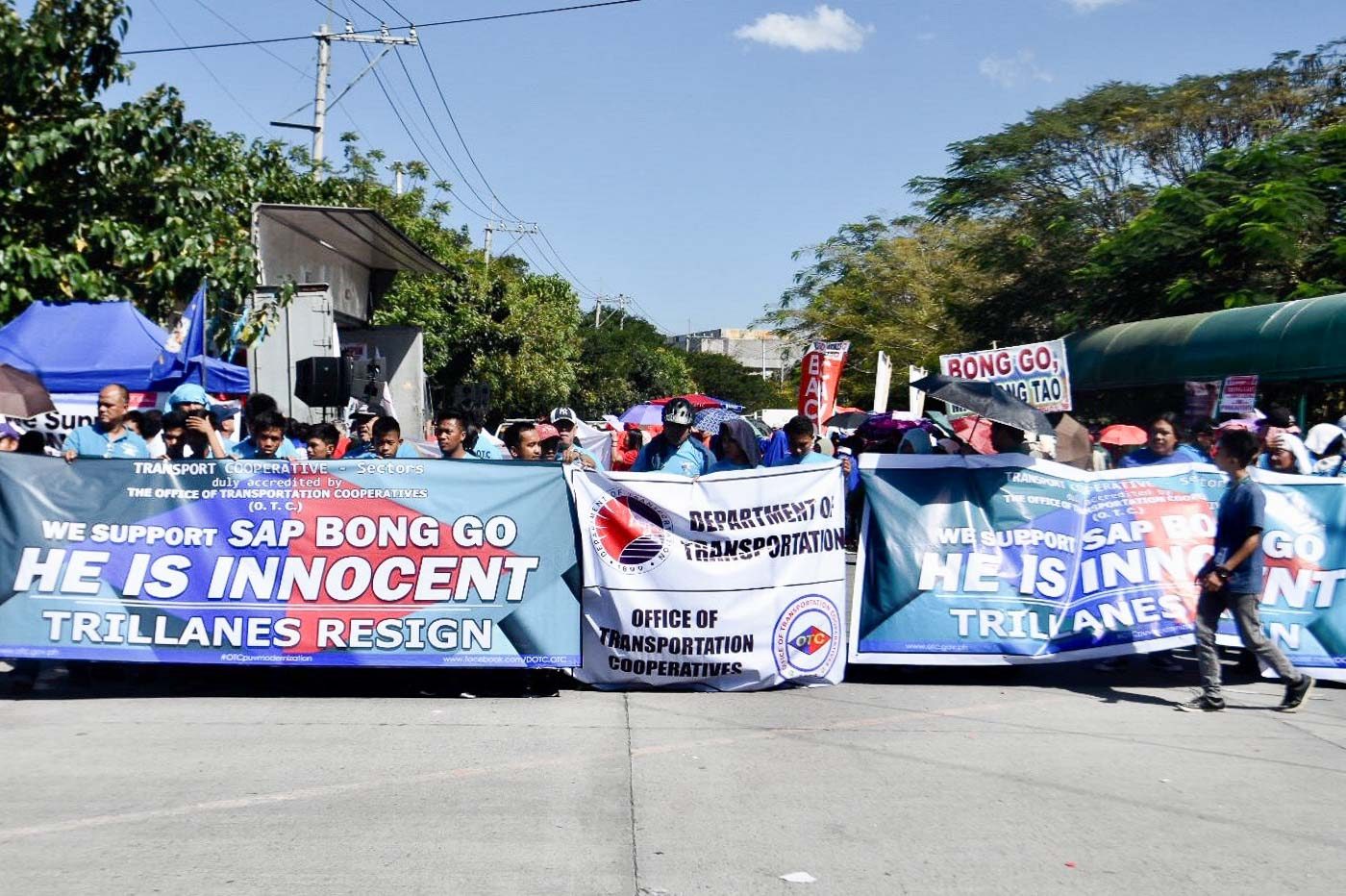 Facebook Twitter Copy URL
Copied
If the innocence of Bong Go depended on a vote among the warm bodies inside the Senate compound, he would have won hands down. But the probe failed to pursue questions that would have given more light on the frigates issue.

AT A GLANCE: 5 UNANSWERED QUESTIONS IN THE FRIGATES ISSUE:

MANILA, Philippines – A curious crowd trooped to the Senate on Monday, February 19, for the Senate probe on the frigates deal mess that prompted the ouster of a Philippine Navy chief and dragged Special Assistant to the President Christopher “Bong” Go.

It wasn’t only the presence of at least 8 Cabinet secretaries that was extraordinary. Many other high-ranking government officials were there to watch, too, along with the government’s social media stars.

Actor Robin Padilla gamely took photos with tickled fans at the gallery, about the same spot where another actor, Philip Salvador, was spotted towering as he watched the discussion in the Session Hall.

Officials of the former Aquino administration were also present to defend themselves against allegations they were the source of problems in a project that intended to acquire two warships for the Philippine Navy. And somewhere in the crowd were former president Gloria Macapagal Arroyo’s most loyal allies – her former political adviser Gabby Claudio and her former justice secretary Agnes Devanadera.

But the star of the day, of course, was none other than Go, who arrived at the Senate to deliver a speech first before a banner-bearing crowd that gathered there to support him. He was expected to refute reports he intervened in a multi-billion-peso military modernization project. (DOCUMENTS: How Bong Go is linked thrice to the frigates deal) The gallery laughed, a no-no on the Senate floor where the audience is expected to keep quiet. But there was no reprimanding the audience for failing to observe silence on the floor. The senators didn’t mind.

Go succeeded in showing he enjoys the full backing of the executive branch. That Cabinet secretaries took time off from their busy schedules to attend the hearing underscored the importance of the President’s closest aide, the ultimate gatekeeper. If Go’s innocence depended on a vote among the warm bodies inside the Senate compound, he’d have won hands down. He had also won the support of several senators. (READ: Senators amp praise for Bong Go during frigates hearing)

“Mr Chairman, with all due respect, I think we are wasting the time of Secretary Bong Go sitting here because it’s very clear, wala naman siyang kinalaman dito (he has nothing to do with this),” said Legarda, eliciting applause around the room.

But the Senate probe failed to explain the existence of the documents that, at the very least, linked Go and his office to the frigates deal.

1. Who went to Malacañang to complain about the frigates project and what was their agenda?

The Senate probe gave a glimpse of the inner workings in Malacañang, where Go’s office employs paralegals who apparently wield the power to call on government officials to explain if complaints are filed against them.

Lloyd Christopher Lao, an Undersecretary in Go’s office, testified in the Senate that he couldn’t remember who they were except they were presumably Koreans because of “the way they speak.” But Malacañang must have a log of its daily visitors. It shouldn’t be difficult to find out their identities.

In an earlier interview with Rappler, Lao said the complaint came from Hyundai. If it did come from Hyundai, why did representatives have to go to Malacañang while it was already in close coordination with the defense department and the Philippine Navy to implement the frigates project? Go said his office merely endorsed a complaint to the Department of National Defense. He resented the use of the word “intervention”, saying it is “malicious”. (READ: Bong Go rails against Rappler, Inquirer in Senate hearing)

“It’s a mere notary endorsement which is one of the thousands of complaints we endorsed as part of President Rodrigo Roa Duterte’s agenda to open the gates and ears of Malacañang to complaints against public officials and against the bureaucracy,” Go said.

But the “notary endorsement” was followed by a meeting in Malacañang, attended by Navy officers in charge of the frigates project.

Lao said the complainants were concerned about the delay in the project. At the time, the Philippine Navy was asking the defense department to reject the decision of winning shipbuilder, Hyundai Heavy Industries (HHI), to install the Combat Management System (CMS) of fellow South Korean firm Hanwha Systems in the ships. The Navy wanted the other supplier, Tacticos Thales.

If the concern was only about delay, was it enough to warrant Malacañang’s intervention to convene a meeting with officers of the Philippine Navy?

Lao said the complaint didn’t involve corruption allegations against the defense department or the Philippine Navy. It was important to clarify this with the complainants amid allegations swirling in the grapevine against all parties.

Could the complaint have come from Hanwha? If if did, it becomes even more questionable. Why would a South Korean company with no standing contract with the Philippine government go to Malacañang to protest supposed delays in the frigates project, while the government was deciding which CMS to install in the ships?

2. Who was the true source of the white paper given to Lorenzana endorsing Korean supplier Hanwha Systems?

On January 12, 2017, Lorenzana sent Vice Admiral Ronald Mercado a white paper endorsing Hanwha for the CMS of the warships. On a Post-it note attached, Lorenzana instructed the then-Navy chief to “rebut” the white paper that came from Go and to submit a report to the President. A year after the controversy erupted, Lorenzana said he had forgotten who handed him the white paper in Malacañang and that he made the mistake of assuming it came from Go. But can he really forget the source and be sure that it wasn’t Go at the same time? The senators didn’t press.

Senator Risa Hontiveros asked what Lorenzana meant when he asked for a rebuttal of the white paper, which appeared to suggest he was ordering the Navy chief to debunk the claims in the white paper.

Lorenzana said he may have used the word rebut incorrectly, citing his supposed poor mastery of the English language.

Hontiveros was not convinced. “I respect you more than that Secretary Lorenzana. Apat na dekada na po kayong nagsisilbi sa ating taong bayan (You’ve been serving the country for 4 decades) in defense and foreign relations. I put more [weight on] your understanding of the implication of your words,” she said.

The timeline connects. Lao would be calling Mercado’s office, based on his testimony in the Senate. He would be referred to then Commodore Robert Empedrad, who was the officer in charge of the frigates project at the time.

3. Who were all the people present in the Malacañang meeting and what did the meeting achieve?

A January 18, 2017 letter shows Lao invited Empedrad to a meeting in Malacañang to discuss the CMS selection. The Navy prepared a Powerpoint Presentation to defend its preference for Tacticos Thales over Hanwha Sytems.

“Sabi ko, ‘Sige, much better para at least ma-clear out (I said, “Sure, it’s much better so we can clear the issue),” Lao told the senators. He claimed all these were standard operating procedure (SOP), done without the knowledge of Go. Lao has since moved to the Housing and Land Use Regulatory Board (HLURB).

According to Lao, they only took notes and made no conclusion or judgment nor made further contact with either the defense department or the Philippine Navy. “Pinakinggan lang niya. Hanggang doon lang po (He only listened. That’s all that happened),” said Go. 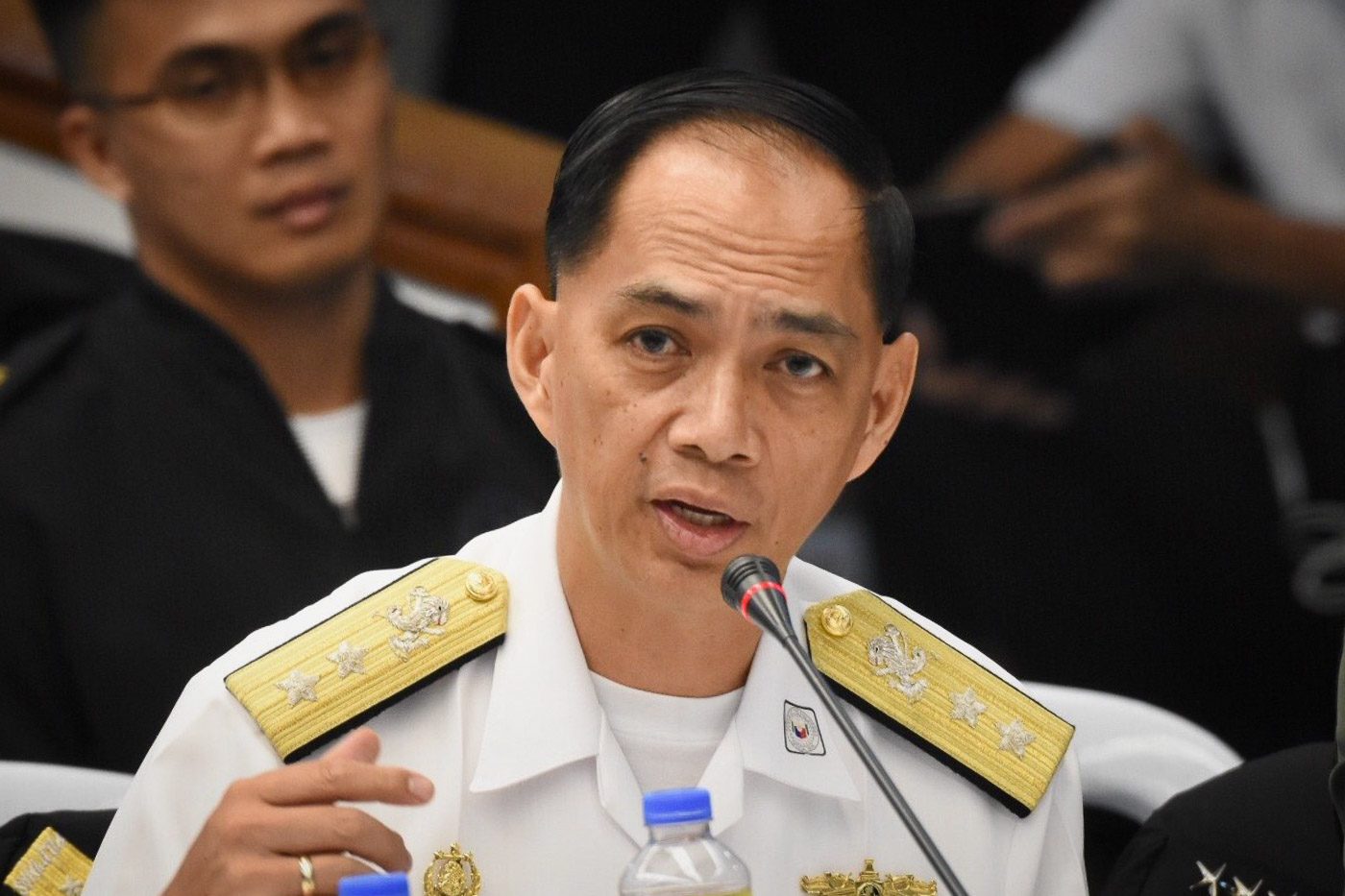 The Senate probe established that Empedrad made a presentation during the meeting to defend Navy’s preference for Tacticos Thales. Commodore Sean Villa, the Project Management Team chief who succeeded him, was also present.

In the Senate, the Navy officers unanimously affirmed the superiority of Tacticos Thales over Hanwha. But they were not grilled about the Palace meeting.

It is unclear who else were present in the meeting, what questions were asked, and what notes Lao’s paralegals took. Lao said neither the Korean complainants nor Lorenzana were present during the meeting. Lorenzana said he didn’t know about the meeting in Malacañang. If that is the case, what value did that meeting, convened by an undersecretary, without the knowledge of his boss, serve?

4. Did President Rodrigo Duterte have any role in the Malacañang probe on the frigates deal?

The President’s name was in two of the 3 documents that linked his closest aide to the frigates deal. In the Post-it note, Lorenzana instructed Mercado to submit his report to the President himself. The report later prepared by Empedrad was addressed to the President, with attention to Go.

Empedrad’s report was coursed through the Defense Acquisition Office. The Senate probe discussed the Post-It note but Empedrad’s written report was not scrutinized. DAO chief Leodegario dela Paz was present at the Senate hearing.

Trillanes said he believes that Go intervened on behalf of Duterte. Go dismissed the documents and said he was only dragged into the controversy to destroy Duterte, all part of political play. The nagging question is, did Go or his undersecretary act on their own, and why?

Mercado’s undignified relief on December 19 over alleged “insubordination” over the frigates project shocked the military. His successor, Empedrad, was installed OIC chief a day before the top officers nationwide gathered in Camp Aguinaldo to celebrate the military’s 82 founding anniversary. Duterte was guest of honor.

Who really wanted Mercado out and why was it done hastily? Mercado told senators he learned about his relief via a text message on December 18, apparently even before AFP chief General Rey Guerrero received the order, which shows how protocols may have been violated. 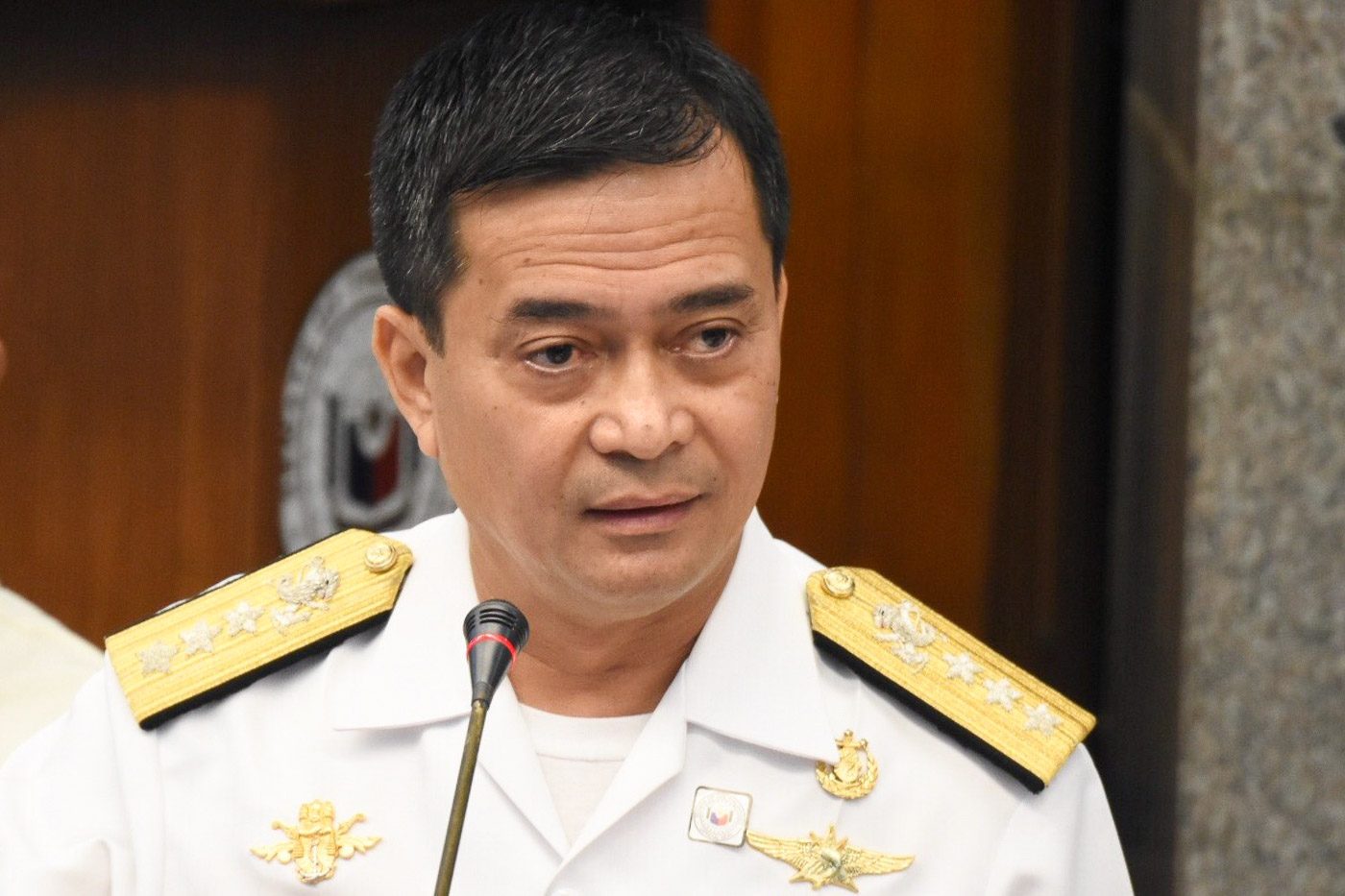 The change of command ceremony happened the following day inside the AFP headquarters, without the usual rites and rituals. Lorenzana had to later explain to former chiefs of the Philippine Navy who were disappointed with what happened.

Mercado’s ouster also came as a surprise to journalists covering Camp Aguinaldo, who had heard about the tension over the frigates project. As early as the first week of December, there was a letter supposedly prepared by Lorenzana asking Duterte to relieve Mercado. Rappler obtained a copy then and showed it to Lorenzana. He said: “Look. I did not sign it.”

In a press conference on December 20, Lorenzana said he didn’t want Mercado relieved but he had to support the recommendation of DAO. Lorenzana also assailed Mercado’s supposed threats to cancel the project if the Navy didn’t get its way.

“I did not want to remove him but the team that is involved in the acquisition in the frigate was alarmed because the project was delayed because of the insistence of Admiral Mercado on the system….They were the ones who really recommended to me to relieve Admiral Mercado. I said, ‘Huwag muna. Pag-usapan. (Wait. You can discuss it.)’ When Mercado continued to insist and continued to talk, painting the department in a bad light, I had to act,” Lorenzana said.

Mercado is a presidential appointee. Lorenzana said his removal was approved by the President.

But questions remain about the rush to install Empedrad as OIC chief to replace Mercado when the Navy’s No. 2, the Vice Commander, could have served the post until Empedrad was officially appointed to the post on January 18. Empedrad was plucked from his post in Camp Aguinaldo to lead the Navy.

Empedrad himself said he still prefers the CMS of Tacticos Thales to be installed in the warships except he that he agrees with the DND position that Hyundai has “sole right” to choose the maker.