Across the board, personnel of all ranks, from Police Officer 1 (PO1s) to the 2-star police general who heads the unit – get P30 a day, translating to an allowance of roughly P900 monthly.

While Daily Additional Subsistence Allowance is its official name, troopers typically refer to it as the “ASA.” Since Police Director Benjamin Lusad took over the elite PNP unit, the “ASA” has referred not only to its official meaning but a more colloquial one, taking off from its English translation: hope.

They continue to hope it would come despite its unlikelihood. Because for over two years, thousands of PNP SAF troopers apparently failed to get a bulk of their monthly allowances, even if the unit’s finance department officially received it.

It’s now the basis of a complaint filed by current and former SAF personnel – including a former SAF chief – before the Office of the Deputy Ombudsman for the Military and Other Law Enforcement Offices (MOLEO).

Lusad, former SAF budget and fiscal officer Senior Superintendent Andre Dizon, and police sergeants Maila Salazar Bustamante and James Rodrigo Irica from the SAF’s finance office, are accused of committing plunder and malversation of public funds in receiving but failing to distribute over P59.8 million in funds meant for the allowances of SAF troops and allocations for the Explosive Ordnance Disposal Hazardous Pay.

According to information the SAF itself released to the complainants, the SAF under Lusad received the following amounts, intended for distribution to SAF personnel for their ASA and hazardous pay:

Where did the money go?

Grumblings about allowances not reaching SAF troopers is nothing new.

As early as 2017, Rappler learned from troopers themselves that they had not received their ASAs since Lusad took over. Troopers did, however, eventually receive their monthly allowances for the months of January 2016 and July 2017. They also got their allowances for January to June 2017.

Although Lusad took over the post only on July 1, 2016, the disbursements for earlier ASAs fall under his tenure. SAF sources familiar with both administrative and field operations confirmed to Rappler that the ASA typically arrives months after its intended allocation. 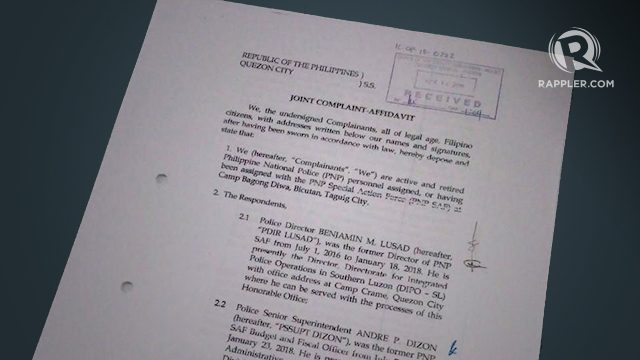 But by hook or by crook, SAF personnel have come to expect roughly P900 monthly from the ASA. While the amount doesn’t seem much, an additional P900 spells a world of a difference for troopers who struggle to make ends meet or those deployed in tough areas in the provinces. It’s the monthly P900 that many SAF troopers pool for their daily meals and other necessities.

A source privy to how SAF troopers get by on the field said that they typically pool together their ASAs for their monthly meal budget. “If you put together all the ASAs, you get to buy more food. You get better food,” the source said.

Without it? “Kanya-kanya (It’s every man for himself),” the source added.

What happened when they weren’t getting their ASAs? Some had to resort to their own money to pay for their meals and other necessities while out on deployment.

Lusad has long known about these grumblings and complaints. Several times in 2017, in fact, no less than former and current SAF officials informed Lusad about complaints from the troops that they weren’t getting their allowances.

The complaints went on until January 2018, when the PNP decided to reshuffle its top officials. From SAF director, Lusad was appointed chief of the Directorate for Integrated Police Operations (DIPO) in Southern Luzon.

Officials both in SAF and in Camp Crame, the PNP headquarters, have long known of the issues against Lusad, particularly concerning allowances.

On March 27, 2018, former and current SAF personnel – both commissioned and non-commissioned – met the new SAF leadership, headed by current chief Noli Taliño, to discuss the non-release of the ASA.

Also present in the meeting were Lusad himself and Getulio Napeñas, former SAF director, according to sources who attended the meeting. The delay in the release or the non-release of allowances had been a sore issue even before Lusad was reassigned. It lingered, understandably, even after he left the unit.

According to the affidavit submitted to the Deputy Ombudsman for MOLEO, Lusad and Dizon “admitted that they received the amount for the questioned ASA and only apologized to the complainants and reasoned that they used the said amount for operational expenses.”

A little over a week later, on April 6, the complainants, the SAF leadership, Lusad, and Dizon again met. It was in this meeting that they supposedly said that the funds allocated for the ASA was used to fund operations, fellowships (which translate to celebrations, in SAF language), and specialized training).

Operations, said a source privy to the meeting, included expenses for SAF troopers deployed to guard the New Bilibid Prison (NBP) and provide support in Marawi City during the attempted siege.

“However, they did not show any proof as to the said operational expenses, fellowships, and personnel trainings, and the liquidation of the amount of money for the ASA which they received,” reads the affidavit.

It was at that point that complainants decided to push through the filing of the case before the Ombudsman.

“We consulted a lawyer and he explained to us that the act of respondents [Lusad, Dizon, Bustamante, and Irica] is tantamount to the commission of the crime of plunder as defined and penalized by Section 2 of RA Number 7080,” reads the complaint-affidavit.

Citing the law, the complainants asserted that Lusad and the rest “committed the crime of plunder by receiving the amount of P58.849 million which was allotted for the payment of the ASA of the uniformed personnel of PNP SAF from Finance Service Office 16 and failing to deliver, release, or give said amount to us and to the other uniformed personnel, thereby giving the assumption that he amassed said amount and appropriated it for himself.”

They are also being charged for malversation of funds, since assuming the money was indeed redirected for use in operations, fellowships, and training, this would be illegal since the funds were specifically intended for the allowances of personnel.

It was after the April 6 meeting that the respondents decided it was time to file a case.

Shortly after this, according to sources close to the SAF leadership, the SAF’s finance department said it had come up with P10 million that could be released for allowances.

Taliño was told about this amount but did not receive the money until after April 12, when the complaint was filed before the Office of the Deputy Ombudsman for MOLEO.

By April 13, Friday, several of the complainants to Rappler they had already gotten feelers from both the SAF and the PNP’s Directorate for Comptrollership to either withdraw the case or ignore it once the Ombudsman asks them to reply later on – in effect, dropping the case against Lusad and the others.

Also on April 13, Taliño gathered SAF personnel based in Camp Bagong Diwa in Taguig City.Before hundreds of men and women in SAF uniforms and berets, Taliño informed them of the case filed against Lusad and SAF finance officials.

Morale was high in the SAF, troopers said, because of the P10 million in allowances that was set to be released to the troops and, because, the allowances had long been awaited.

Taliño, SAF sources said, cited the filing of the case in reminding more junior officers that ASA allocations should and will always be for troopers – both in Bagong Diwa and around the country – and not for anything else.

Lusad, a member of the Philippine Military Academy Class of 1985, currently heads DIPO Southern Luzon. He is due to retire in January 2020 yet.

That he was appointed SAF chief was a surprise to many in the first place – particularly to SAF personnel. He had never donned the black and red beret, until he was appointed head of the elite police unit.

While it has happened that a non-SAF general was appointed head of the unit, the directors he immediately preceded – Napeñas and Lazo – were true blue SAF troopers. Taliño was also among the original recruits of the SAF straight from the academy.

The running explanation – or joke, depending on who you ask – was that Ronald dela Rosa, outgoing chief of the PNP, appointed Lusad as SAF because he was his personal “tagaligtas (savior)” back in the PMA. The talk in Bagong Diwa is that Lusad had apparently “saved” Dela Rosa as a plebe of the Class of 1986.

While the veracity of that story is unclear, at least one thing is: when corruption allegations are involved – and especially in an administration that supposedly does not tolerate even a “whiff” of corruption – there’s no saving anybody.

“Hindi namin puwedeng sapawan ang (We cannot do the work of the) Ombudsman… I felt bad, nagalit sa totoo lang, galit ako (I got angry, to tell you honestly),” Dela Rosa said during his Monday, April 16, press conference.

Dela Rosa, according to sources who to discussions, had privately told confidantes that the issues against Lusad in SAF were something the police general would have to solve himself. – Rappler.com