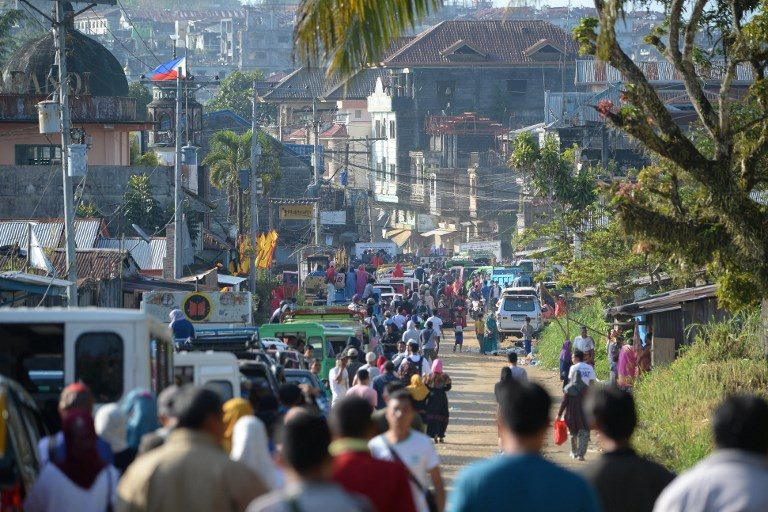 Facebook Twitter Copy URL
Copied
The government creates an adjudication board – the Land Dispute Arbitration Committee (LDAC) – to address concerns arising from the large-scale land titling program. There are many ways it could turn into a nightmare.

MANILA, Philippines – Norhata Bacarat’s name – in red ink and bold letters – is written on a bullet-riddled wall of an abandoned store in Padian inside the former battle area in Marawi City

She is the “owner”, according to the graffiti. A phone number accompanied the name, perhaps a plea to be contacted when there are questions about the property. But it was out of reach when Rappler called.

On May 10, the site of fierce clashes with local armed groups linked to Islamic State was again closed to the public after a month-long Kambisita, an activity the government arranged to allow residents to see their war-ravaged homes and collect remaining valuables before the structures are demolished.

There is fear sweeping among residents that they could lose their land when the government begins rehabilitation work.

The fear is rooted in the messy land ownership in the city. It’s bad in the Philippines generally, but it’s worse in Marawi City.

Many residents do not have official titles for the land they occupy while those who do have titles might find them overlapping with other claims. Government maps are not always reliable either.

There’s paranoia that the situation will make it easy for the government to take the land for its plans to widen roads, make way for easements on both sides of Agus River, and other public infrastructure. (READ: Q and A: Marawi rehab chief seeks to ease fears of land grabbing)

The messy land ownership in Marawi is going to complicate the rehabilitation work and the government knows it.

“It will be a problem. It will take time. It will be a lot of work. There will be frustrations for the losers and winners will be rewarded with a title later on,” Assistant Secretary Felix Castro Jr, manager of the Task Force Bangon Marawi (TFBM) Field Office, told Rappler.

The government created the adjudication board – the Land Dispute Arbitration Committee (LDAC) – to address concerns that will arise from the large-scale land titling program.

In the absence of a title, Castro residents may present documents such as tax payments and papers from their respective barangay chairmen.

“It’s an adjudication board to determine who really is the owner. Of course you will have to show your titles. If you do not have, you have to have proof that the land is yours. There are instances that there are many claimants and this has to be verified so that the real owner will be determined,” said Castro.

There are many ways it can get complicated. At a consultation meeting, resident Drieza Lininding asked the government to also stop banks from taking mortgaged land in the battle area.

He said there are cases when relatives were able to mortgage the lots without informing the occupants.

“Our appeal is for the government to allow moratorium so that owners of affected lands or properties could settle their debt and made aware of this,” Lininding said.

“Some do not know that their land or properties were already mortgaged by some unscrupulous people, some maybe their relatives, so we need to look into this before touching or taking anything inside MAA [the Most Affected Area],” he said.

Marawi City Mayor Majul Gandamra said the local government will be working closely with the task force of the national government although the members of the adjudication board have not been announced yet.

“It will probably be led by a lawyer with proven integrity and competence. The members will be coming from different sectors including civil society organizations,” Gandamra told Rappler.

“As in many post-conflict case, the option of strictly “no title, no return” policy may feed into extremist narratives of Christian dispossession of Muslim land, and therefore is not recommended,” said the report published by The Asia Foundation (TAF).

The government should recognize traditional and cultural rights of residents, it said. “As with the rest of the region, many pre-colonial, traditional, and informal governance structures and practices around land, housing, property retain legitimacy alongside the laws of the present Philippine state.”

The report said residents should be involved in resolving land disputes by tapping them, for example, to help map their own communities and correct and reconcile possible errors in official records.

The authors of the report put up a web site – www.openmarawi.com – where different maps and information are uploaded. On May 10, the battle area was closed again to residents. The groundbreaking ceremony for the rehabilitation – which will begin with the demolition of structures – is scheduled in June.

The contract for the rehabilitation work has yet to be awarded. The design plans of Chinese-led Bangon Marawi Consortium, which government handpicked, will be subjected to a Swiss challenge.

But the experts also warned against starting demolition before resolving land disputes. “Debris clearing can only be done after the proper documentation of rights and ownership on housing, land, and property,” according to the report published by TAF.

There might be a situation where the remaining walls may be the only evidence to mark where properties begin and end.

“Given the lack of comprehensive land records, it is important that these claims and their links to any existing physical features be documented before prematurely clearing and developing the most affected area,” the report said.

Based on government’s timeline, it will take about 18 months to reconstruct public infrastructure in the former city proper. The residents will be allowed back to rebuild their homes later.

For residents, a year-and-6-months is a long wait. But experts are concerned it might not be long enough to settle all land disputes in the former city proper.

The government was urged to manage expectations. – Rappler.com

Top photo: PROOF OF OWNERSHIP. Norhata Bacarat finds her property in rubbles when she returns to her home in Padian, Marawi City during the Kambisita on May 8, 2018. Photo by Manman Dejeto/Rappler