Senate inaction on China: No inquiry amid militarization 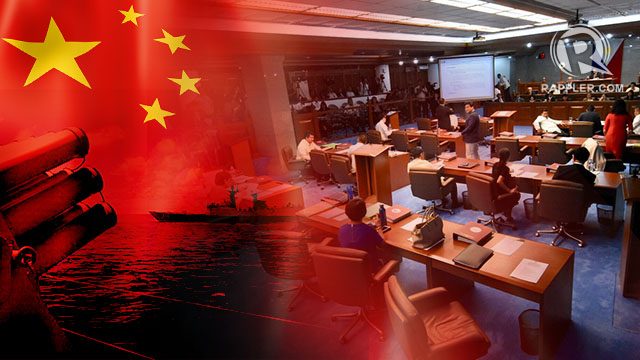 MANILA, Philippines – Two years into President Rodrigo Duterte’s term and in the face of China’s militarization of the South China Sea, the Senate has yet to conduct an inquiry into his foreign policy geared toward the Asian giant.

While the President is deemed the “chief architect” of the Philippines’ foreign policy, the Senate has a say on the matter. It has the constitutional power to concur – or not – in the executive’s ratification of treaties, and has oversight functions. But so far, all that can be heard from the chamber is silence. (IN PHOTOS: The China build-up)

Past and present senators, analysts, and critics said it is the Senate’s “patriotic duty” to protect the Philippines’ territorial integrity.

Out of at least 7 resolutions calling for an inquiry, the Senate has only heard one. The Senate science and technology committee discussed the status of Filipino maritime research in Benham Rise as reports of China’s presence in the area surfaced. But due to its nature, the hearing did not deeply discuss the administration’s foreign policy and China’s alleged intervention. (READ: Malacañang says Filipinos need China for Benham Rise research)

As early as September 19, 2016, there was a pending resolution seeking an inquiry into Duterte’s “conflicting” foreign policy.

At the time, Duterte began leaning toward Russia and China and away from the United States, the country’s traditional ally.

“Given the number of conflicting statements coming from the President and senior government officials, there is a need to clarify government’s position and engagement with its neighbors and allies, and to ensure the Filipino public that we are pursuing a clear and coherent foreign policy that is most beneficial to the country,” the resolution read.

On September 21 or two days after filing, the resolution was referred to Senator Loren Legarda’s foreign relations committee. The hearing has never happened to date.

The Senate has also so far not acted on the two separate resolutions seeking to commend the members of the Philippine delegation, including former president Benigno Aquino III, for winning the case. The resolutions remain pending in the committee on rules since 2016.

On the contrary, his predecessor as Senate president, Senator Aquilino Pimentel III, backed the conduct of a Senate probe into the issue. He, however, refused to describe as militarization China’s occupation of islands, saying the chamber needs “more information, pictures, analysis, data.”

“I think we should hear it — the Senate should play a more active part in the formation of our foreign policy,” Pimentel said in a television interview on June 18.

In a separate message to reporters, he said: “Then have a closed-door confidential briefing on how the Department of Foreign Affairs intends to handle what is happening on the ground.”

While Pimentel has expressed support for the inquiry, there had been no hearings on China and Duterte’s foreign policy during his term – even as most resolutions on the matter were filed then.

Asked about this, Pimentel told Rappler to ask Legarda why there were no hearings. He said the foreign relations committee must have prioritized the country’s membership in the China-led Asian Infrastructure Investment Bank (AIIB), the treaties on social security, avoidance of double taxation, and the Paris Agreement on Climate Change.

Benham Rise, an underwater plateau off Aurora, is believed to be rich in living and non-living resources such as minerals and gas. It is not part of China’s 9-dash line claim, and no other country has claimed it.

The resolutions were referred to Senator Gregorio Honasan II’s committee on national defense and security since 2017. No hearing has been conducted to date.

The resolutions of Trillanes and De Lima came after Defense Secretary Delfin Lorenzana reported that they monitored a Chinese survey ship in Benham Rise for as long as 3 months in 2016.

The only Senate hearing on Benham Rise was the one conducted by the Senate science and technology committee this year, focusing on the status and capability of Filipino scientists to conduct research in the area. It was held after China gave names to the area’s undersea features. (READ: Letting China into Benham Rise: History lessons for Duterte and Cayetano)

During the hearing, maritime law expert Jay Batongbacal said the ship was found surveying not Benham Rise, but the east of Surigao province – which he said was worse because it was closer to the Philippine coast. National Security Adviser Hermogenes Esperon said it was done without permission, and admitted that China has had a record of illegal entry in the area since 2004.

Just this year, China reportedly deployed missiles on 3 Philippine-claimed reefs in the Spratly Islands. In May, Trillanes and Aquino filed Resolutions 722 and 723, respectively, calling for an inquiry.

In June, a China military aircraft landed in Duterte’s hometown in Davao City. The landing came just after the China Coast Guard was caught taking the catch of Filipino fishermen in Panatag Shoal or Scarborough Shoal. (READ: To prove fruits of PH-China ‘friendship,’ Roque brings fishermen to press briefing)

According to the legislative history of the two Senate resolution, they were initially referred to Honasan’s national defense and security committee but the leadership decided to change it. It was an attempt to avoid escalating tension between the two countries, said Honasan.

Instead, the chamber decided to refer the two resolutions to Legarda’s foreign relations panel, with Honasan’s committee as the secondary one.

In an interview with reporters on Wednesday, July 4, Honasan said the Senate decided in plenary “that the first line of defense” is their foreign affairs committee. This will allow them to first take a diplomatic approach. In contrast, he said, passing it on immediately to the national defense committee would mean “we are looking at the prospect of confrontation.”

Referring to Legarda, Honasan said, “It’s her call to conduct a hearing. I will join her.”

Opposition senators have questioned why there is no investigation yet, with Minority Leader Franklin Drilon calling on the body to “assert the Senate’s role as a partner in the conduct of foreign affairs.”

In June, Legarda said she would conduct an investigation “soon” or during the recess. That has not yet happened.

On Thurday, July 5, Legarda’s office told Rappler that she has set the joint hearing on July 30, a week after Duterte’s 3rd State of the Nation Address. The senator’s office said they are still finalizing the resource persons to be invited.

University of the Philippines political science assistant professor Gene Pilapil told Rappler that the absence of an inquiry is meant to protect the Duterte administration. He also said that the impending hearing is already too late.

“This is to avoid embarrassing the Duterte administration for electing to become a stooge of Chinese expansion in the West Philippine Sea, as the Philippine stance has become not so much just an appeasement policy but a collusion policy,” Pilapil said.

“[The scheduled Senate inquiry] should show how late the inquiry is, and only because there are already missiles deployed in the built-up structures of China in the disputed territories in the West Philippine Sea. There has also been no Senate inquiry on what has happened to our relations with our allies, especially the EU and the US…. All these Senate inquiries, the Senate majority has avoided in conducting because of the negative impact on the Duterte administration they will surely bring,” he added.

Rappler asked Legarda why there were no previous hearings but the senator has yet to respond.

In a previous radio interview, Legarda backed Duterte’s stance in dealing with disputes in the South China Sea, saying nobody wants to go to war.

Honasan said there is no need for the Senate to conduct a hearing to perform its oversight functions.

“That’s the call of the chamber,” he said.

“Sa dami ng nangyayari ngayon, siyempre ‘pag pinatawag mo sa hearing, mahina diyan ang dalawa o tatlong oras, imbis na ginagawa nila ang kanilang trabaho. So hintayin muna nating maka-consolidate ng information para pagtawag natin,” Honasan explained.(With all our tasks now, of course if you call a hearing it will probably last two or three hours, and they will be there instead of performing other tasks. So let us wait first for consolidated information so that when we call a hearing, it will be worthwhile.)

“By the way, we don’t need to conduct hearing to perform our oversight functions. Puwedeng puntahan ng lawmaker sa opisina (The lawmaker can go to their office) and ask them,” Honasan added, saying they are already doing that.

He also denied allegations that the chamber is trying to avoid the issue.

“That is the impression but what do the facts tell us? It could be unfair to the chamber. My idea is AFP and PNP should not be explaining policy. They should be implementing policy update, pero ‘yung magkokomentaryo ka [on] why this operation is conducted, that’s for the political leadership to decide. Kung kukulitin natin sila, unfair din naman nagkakabuhul-buhol (It will be unfair for them if we bug them),” Honasan said.

Legarda and Honasan are both ending their terms in 2019 and are reportedly eyed to be part of Duterte’s Cabinet. Neither of the two have confirmed it.

Senator Panfilo Lacson, who earlier questioned China’s movements, said the Senate should do it “as part of our patriotic duty” to serve the people.

“We should do it as part of our patriotic duty to serve the interest of future generations of Filipinos who may wake up one day under a dismembered territory. The arbitral ruling is one victory that we should all enjoy and not treated as pyrrhic or worthless,” Lacson said in a text message.

But is the hearing too little too late as what Pilapil said? Lacson would rather not speak for his colleagues.

“I trust that they [Honasan and Legarda] have good enough reasons for belatedly responding to the referral of those resolutions. The least I can say is, I fully support the inquiry,” Lacson said.

For former senator Rene Saguisag and former Senate president Aquilino “Nene” Pimentel Jr, the Senate must do something about China’s militarization of the South China Sea. Former senator Pimentel said the Senate should not allow China to encroach on Philippine territory. Otherwise, it would be a betrayal of its commitment to protect the country.

“The majority seem to be another echo chamber. The Senate should be more vocal on foreign policy. It should protest the reported and photographed installation of foreign military facilities in our territory, under Section 25 of Article XVIII of the Constitution, which mentions its role,” Saguisag said.

Former senator Pimentel said: “Yes definitely. I think we should not allow any nation to bully us out of our own national territories…. We should insist our territory is ours and, even under the guise of friendship, we should not allow China to creep into our own territories and claim it for their own. That would be our betrayal of our commitment to protect integrity of our country.”

For Saguisag, being allied with the President should not intervene with crucial decisions for the country. He recalled how he and the late senator Agapito “Butz” Aquino were close to former president Corazon Aquino, but they decided against her wish to continue the American bases in the country.

“[We] were as close as anyone could be to President Cory. When she asked us to see her in the Guest House to ask for our votes on the bases in 1991, as much as we loved her, the country came first, and we said to ask us another… We didn’t want to be America’s Last Plantation or China’s new one,” Saguisag said. – Rappler.com