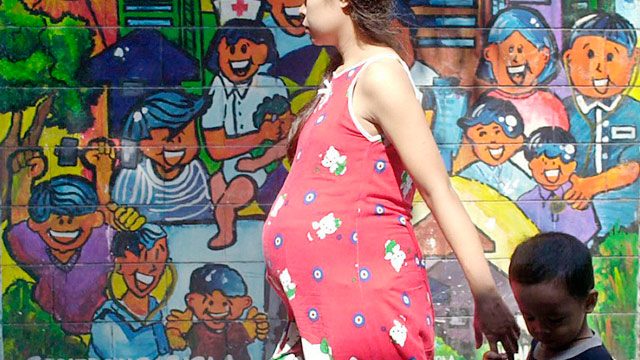 Facebook Twitter Copy URL
Copied
In the Philippines, abortion is illegal and deeply stigmatized, leaving desperate women with no choice but to seek unsafe options online

MANILA, Philippines – It was a desperate cry for help.

On the evening of August 2, 2015, a woman with username “aifa2500” posted on an online forum in the Philippines. She had gotten an abortion a day prior, from a backstreet abortionist she referred to as “Miss Shine.”

In broken English, she explained that she had gone for her procedure to abort her 6-month-old fetus. Upon arrival, she explained she was made to go to the toilet to pee, before being asked to remove her pants and underwear because “she’s going to put the catheter to push the baby out.”

“Then Ms Shine ask how I feel I said its uncomfortable. Then gave me medicines to take every 4 hrs and added medicine to buy outside. Then she ask for the payment 10k ($188) coz its done the procedure,” she wrote.

“Its not how I thought coz I’m looking for surgical one. But they say it can be done by this procedure with 24hrs looks like u r in labor or delivering a baby. So I trust them. I follow what they instructs to me when I reach home.”

The evening of her procedure, she described feeling cramps and pain, so that she was unable to sleep. The morning after, she said the fetus had yet to come out.

“When I go to toilet I saw some blood. so I change the napkin I took again medicines 4x and I walk… still same paining. But I started to vomit and bowel,” she wrote.

Aifa2500 said she “started to worry about my situation coz the catheter is inserted on my cervix.”

“I texted them that the baby is not out yet looks like not a good sign. someone reply it will come past or slow coz mine is big already just wait. But I still texted them what I will I am worried about the catheter inside my cervix not removed. How long I will wait.”

It was 10:19 pm when she posted the message, about 36 hours since she had the procedure done.

“Pls help me out my situation,” she pleaded.

The replies of concern from other online users were swift.

“I hope you’re okay,” said user liwanagsadilim in Filipino. “I don’t know much about abortions but even I’m bothered by your situation. Take care. Keep us updated.”

“Oh my God! Why are you waiting this long?” another user, krissy, wrote. “You should be admitted to a hospital! Six months is not six weeks! You are acting as if this was like a six-week medical abortion! There were things inserted. Were they sterilized? Were they the right instruments? This was a bad surgery.”

Aifa2500 never replied to the comments on her post.

A month later, on September 3, 2015 user krissy publicly reached out to aifa2500 yet again.

“How are you? I’m really anxious to hear from you. You aren’t even answering my private messages. Please reply or say something here so that I know you are fine. You don’t just post something like that and then disappear without an update. What are we to think now what happened to you??? I don’t want to fear the worst!” she wrote.

It was not until September 26, that users of the forum learned of aifa2500’s fate.

“Our dear daughter and sister aifa2500 is back in the loving arms of her Maker,” posted a user named familyofaifa2500. “We her family do not wish to be bothered anymore by messages, emails, and calls from users of this site. Please let her soul rest in peace and allow us time to accept her loss. For those of you who plan to do what she did may she be a lesson to you.”

Despite abortion being considered a criminal act in the Philippines, the online forum is proof that there is no shortage in the number of Filipina women seeking it.

In the absence of safe and legal options, and the intense stigma surrounding abortion that makes it virtually impossible to discuss, women flock to the internet to find ways to terminate their pregnancies. This, despite the dangers of backstreet abortions.

In the Philippines, one of 3 women is estimated to die daily from unsafe abortions. The Guttmacher Institute estimates there were 610,000 abortions in the country in 2012, a number that continues to rise along with population growth. The reproductive health research organization also said that the Philippines appears to have more unsafe abortions than its neighboring countries in Southeast Asia.

The Catholic-majority country boasts one of the most restrictive abortion laws in the world. While a liberal reading of the law considers therapeutic abortion an exemption – that is, abortions to save the life of the woman or for medical necessity – this is not explicitly stated in the law, outside a 1961 Supreme Court decision.

Watch the arguments of activists for and against abortion below.

In the video, Atty Clara Padilla, the founder and executive director of women’s rights organization EnGendeRights, explains why she supports safe abortions. She successfully proposed language in various laws, including the Anti-Sexual Harassment Act and the Reproductive Health Law, among others. Meanwhile, Rizalito David, who argues against abortion, is the executive director of Pro-Life Philippines, an organization working closely with the Catholic Church to advance pro-life policies.

Abortion is so deeply condemned in the country that it is rarely discussed in conversations. But online, it is a much different, much more vocal universe.

In the online forum Rappler discovered, abortion services are advertised, promoted, and reviewed by fellow Filipinas – much like a marketplace, an Amazon for abortions.

The posts were filled with pleas of Filipinas from all over the country – from Manila to Palawan to Davao – as well as Overseas Filipino Workers (OFWs) from the Middle East and around the world. While geographically apart, all were distressed, anxious, and desperately seeking the same thing: safe and cheap ways to terminate their pregnancies. (READ: The reality of abortions in the Philippines)

While there is no way to verify the authenticity of each and every post on the forum, the sheer number of posts already gives readers a general sense of reality. Each abortion thread has thousands of posts over the course of 4 years, posted by hundreds of different accounts and users.

In analyzing the posts for this story, Rappler took into the account their forum activity, content, the dates they joined and left to determine whether they are genuine or fake accounts. Rappler dismissed dubious users like those that posted hundreds of times, disqualifying them as spammers. Often, these users would repeatedly defend certain abortionists in their posts while attacking users that left negative comments, and criticizing the services of other abortionists.

From the thousands of testimonies that remained and appeared genuine, patterns emerged, painting a clear picture of how backstreet abortionists in the forum serve their clients. While the testimonies have unique details – like where the women are from, ages, social classes, or circumstances – the similarities are striking.

Their most common causes for seeking an abortion are economic – being too poor or cash-strapped to care for a child. For many, even paying for an abortion is problematic and often a reason why the pregnancies aren’t terminated until the 2nd or 3rd trimester, as women scramble to put together enough funds.

Others wanted to terminate because they were too young, college students in their teens, or young professionals just starting their careers. Still others were pressured to abort their babies by their families or partners. Some were rape victims. (READ: [OPINION] It’s time for the Philippines to decriminalize abortion)

Many of the women who underwent abortions in the forum are also evidently Catholic, ending their posts by asking forgiveness from the Lord and from their unborn child.

The thread on Miss Shine’s abortion service, where aifa2500 said she went for the procedure that ultimately killed her, lists 1,638 posts and is 164 pages long. It’s also sprinkled with promotions.

“To all the women here who need help on how to solve their problem about UNWANTED PREGNANCY? Don’t make a doubt! Trust only those knowledgeable person!” said one.

The post also lists its available services for those looking to abort: Dilation and Curretage (D&C) procedure for one-month and two-month pregnancies (better known as raspa in Filipino), and catheter procedure for 3-7 months. In text messages to clients, Miss Shine described the procedure as follows: “Ang catheter procedure, it’s a process of putting straight catheter in the cervix until it opens and the fetus comes out. Painless ang procedure at makakaramdam ka lang ng sakit kapag lalabas na yan. At kapag nalagyan ka ng catheter sa loob ng 24 hours, lalabas na yan (You will only feel pain when it’s about to come out. And once the catheter is inside, it will come out in 24 hours.”

Cytotec, an abortive pill that is illegal in the Philippines, is also available for purchase.

“All procedure is painless,” the post vowed. It included a cellphone number to call.

Another thread, this time for a certain Miss Julie’s services, has 1,230 posts and 123 pages as of publication time.

Miss Julie too offers the same services as Miss Shine, and again, a cellphone number. Both are among the top 3 most-discussed backstreet abortionists in the forum.

Rappler texted the numbers advertised to confirm their authenticity. Both Miss Julie and Miss Shine immediately offered their abortion services.

Neither, however, replied to requests for interview.

Rappler also reviewed the hundreds of pages of testimonies of women in the forum and found that both backstreet abortionists offer their services for cheap prices – between P7,000 (about $130) to P15,000 ($280) for surgical procedures, depending on how far along the pregnancy is.

The process itself is as shady as the procedure.

Women are not allowed to be accompanied by friends or partners, and are required to undergo the abortions alone. They are asked to meet a staff member at SM Fairview, a mall about 22 kilometers north of Metro Manila. From there, they are taken to a subdivision and ushered into a small house where the abortion is induced.

Neither Miss Julie nor Miss Shine require check-ups before the procedure. Neither claim to be doctors, midwives, or medical practitioners. Both offer their services easily and with little planning – like a regular transaction – after just a few text messages exchanged with their clients.

All the pregnant women need to do is show up, and pay up. (READ: A hard look at abortion in the PH)

While both Miss Julie and Miss Shine offer the same services and have similar modus operandi, however, the two claim to be separate operations that are not connected to each other. It is unknown whether the two are based in the same subdivision, but several users said Miss Shine does her procedures in a Novaliches home.

The reviews of their services by women who sought their help are terrifyingly mixed. – Rappler.com