Facebook Twitter Copy URL
Copied
The mayor is unfazed by critics calling him names and invoking links to President Duterte. He only has one question for them: how come people vote for me?

He used to be a bullish mayor, engaging even then-justice secretary Vitaliano Aguirre II in a word war. But he has stopped his weekly press conferences, where he expressed his take on issues concerning his city and country. He has also limited his public appearances.

Osmeña recently figured in the national spotlight; rather, he was dragged under its glare. President Rodrigo Duterte whipped him up during a speech in neighboring Mandaue City.

“Hoy Tomas!” began Duterte, who spoke in Cebuano. “This is not the time of the Spanish colonization. Who do you think you are? You speak so highly of yourself…as if you own Cebu. By what right? Just because you were a former president’s son or grandson?

Tomas “Tommy” Osmeña is, in fact, the grandson of former President Sergio Osmeña, the man with the dignified, slight smile on the P50 bill.

And while Tommy is, of course, not the owner of Cebu City, he has the mandate to look after it – like his own. It is, after all, his home, and many credit him for much of what Cebu is today.

Asked once where Cebu City is, a proud Osmeña replied: “It’s near the Philippines.”

The contradiction in the 70-year-old Cebuano mayor’s life story, which he hates to admit, is that he grew up in Metro Manila. He studied in La Salle Green Hills until first-year high school, where he failed the Tagalog and Catechism classes.

“I couldn’t stand those two things,” he explained, and so he transferred to the Jesuit-run Sacred Heart School in Cebu , where he could speak Cebuano and English all day.

Among the 5 children of the late Senator Sergio “Serging” Osmeña Jr, he was the only one to finish secondary school in the Philippines. He was asked if he wanted to study in the United States, and he responded, “I’m fine here.”

His siblings, including former Senator Serge Osmeña III, studied in England. His youngest sister, Georgia, studied in the United States.

“I resented the fact that I was really second class among my brothers and sisters, but then I was exposed to my own world,” Tomas Osmeña said.

He described himself as the “the local boy” among the Osmeña brood. That proved to be useful to the family, said his sister Maria “Minnie” Victoria Osmeña.

When their father Sergio Jr was campaigning, pragmatic Serge would crunch the numbers and strategize, charismatic Minnie would stand by as substitute in speeches and swap pleasantries with older officials, and there would be Tommy mingling with the crowd, trading stories with just about anyone.

The family had to pack up and leave Cebu years later in 1972, after Ferdinand Marcos defeated their father for presidency and declared Martial Law.

Tommy stayed in exile in the United States for 15 years, working first in his father’s sales company SEROS, then at the Export-Import Bank of the United States as a financial analyst – an experience, he said, that was equivalent to taking “3 MBAs.”

As his career flourished, he had to keep his bond alive with the high school sweetheart he left in the Philippines, Manileña banker Margot Vargas, sending her letters and making calls. Margot later came to visit him in the States when Marcos lifted the travel ban in 1980. They married later in the US in 1983.

When the dictatorship fell, Tommy was already flourishing in California as a property broker. But he and Margot never saw themselves settling down in the US, so Tommy first flew home to see what the regime had done to his Marcos-resistant hometown.

“I saw misery,” he said. “There was a lot of people who were poor, a lot of unemployment, the NPA (New People’s Army) was very active. Everything, you know? The Marcoses were rotten, because the Marcoses punished Cebu,” he said.

As if by instinct, Osmeña went around the city, pulling in more people at every stop until there was a loud enough clamor for him to run for mayor.

Without a political party, Tommy won in the 1987 elections.

It was, he said, the beginning of his work towards making Cebuanos “proud” of their city once more, after challenging times under the Marcos years. 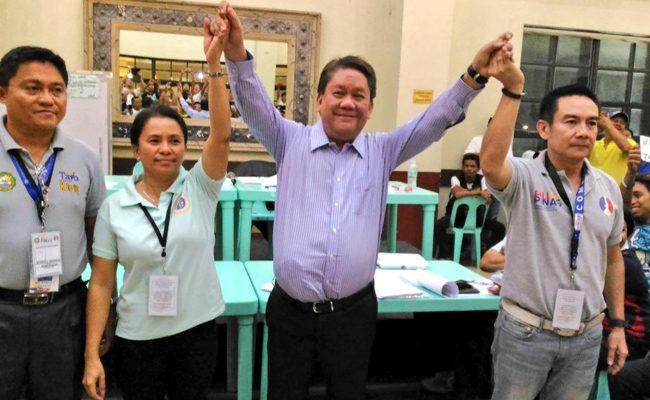 Since then, except for term limit breaks, he has shepherded Cebu City for a total of 19 years.

He has overseen the city’s business boom, with the 300-hectare south reclamation project as his centerpiece enterprise. Completed in 2005, this is where he now plans to house a 60-hectare “Call Center City” to keep up with the Philippines’ BPO boom.

He’s popular among the youth, even outside of Cebu, for his hands-on engagement in his Facebook page. His personal mobile number is posted there to receive request and complaints from his constituents. As of September 2018, his FB page has 630,000 followers, and his phone receives 300 text messages a day.

Based on interactions on his virtual public service wall, he has acted on policy suggestions – from opening their local library 24/7 to building a skate park. There, he also shares personal updates – from meeting with Finance Secretary Sonny Dominguez in Manila to going out for a movie with Margot.

He once ordered an inventory of vehicles issued by city hall to barangays. He then took back the ones from villages where his rivals won in the 2016 elections. When some barangay officials refused to return them vehicles, Tommy filed carnapping, malversation of public property, and corruption complaints against them. They were all eventually cleared by the Ombudsman.

In the same Facebook page where he repeats his vow to serve Cebu City, he also lambasts his political enemies, branding them as “Team Suyop” (Team Drugs). He also openly criticizes cops and the Presidential Adviser for the Visayas Michael Dino.

“He tells people he dislikes to get out, even in private hotels…. He acts as if he owns Cebu,” Cebu City Councilor Joel Garganera, one of Osmeña’s critics, told Rappler in an interview.

Osmeña was not like this to his critics in his early years as mayor, the councilor said. Garganera even admitted to looking up to Osmeña as a leader.

Politics has taken its toll on the visionary, he said, and it showed a side of him that not everyone could easily take.

It is stories about this side of Mayor Osmeña that apparently reached the ears of President Duterte. Osmeña’s relationship with Duterte was strained only recently. When they were both mayors – he of Cebu; Duterte, of Davao City – they often shared the stage and held mutual respect for each other.

In fact, they both shared a passion for going after illegal drugs.

“Before Duterte, what can I say? It (drugs) was all over the place. They’re selling it like juicy fruit chewing gum,” Osmeña said.

While Duterte has been said to be behind a death squad, Tommy publicly commanded his own “hunter team.” Cops in police stations are too embedded in their communities – with crimininals and all – to be trusted, Osmeña explained. So he created a “parallel” team to operate independently from the cops, who are caught up in their daily grind.

“I never ordered them to kill,” he said, addressing reports. He only asked them to kill if the criminals would “fight back” – a phrase already too familiar under the presidency of Duterte.

“They know the rules of engagement. Once you fall within that, you fight it out,” Osmeña said.

But unlike Duterte, who has the national police organization doing his bidding, Osmeña has found himself on the opposite side against law enforcers in Cebu City.

His hunter team has been dismantled, and his most trusted cop who once led it, Senior Police Officer 1 Adonis Dumpit, was gunned down in an anti-drug operation. While the sting was orchestrated by the National Bureau of Investigation, Osmeña nevertheless cut ties with cops over the incident.

Where he used to post on Facebook photos of him with all-smiles men in blue, Osmeña has begun sharing death threats he receives, suggesting policemen are behind them.

Consumed by distrust for cops amid a rise in killings, Osmeña even called his hometown a “criminal city.” 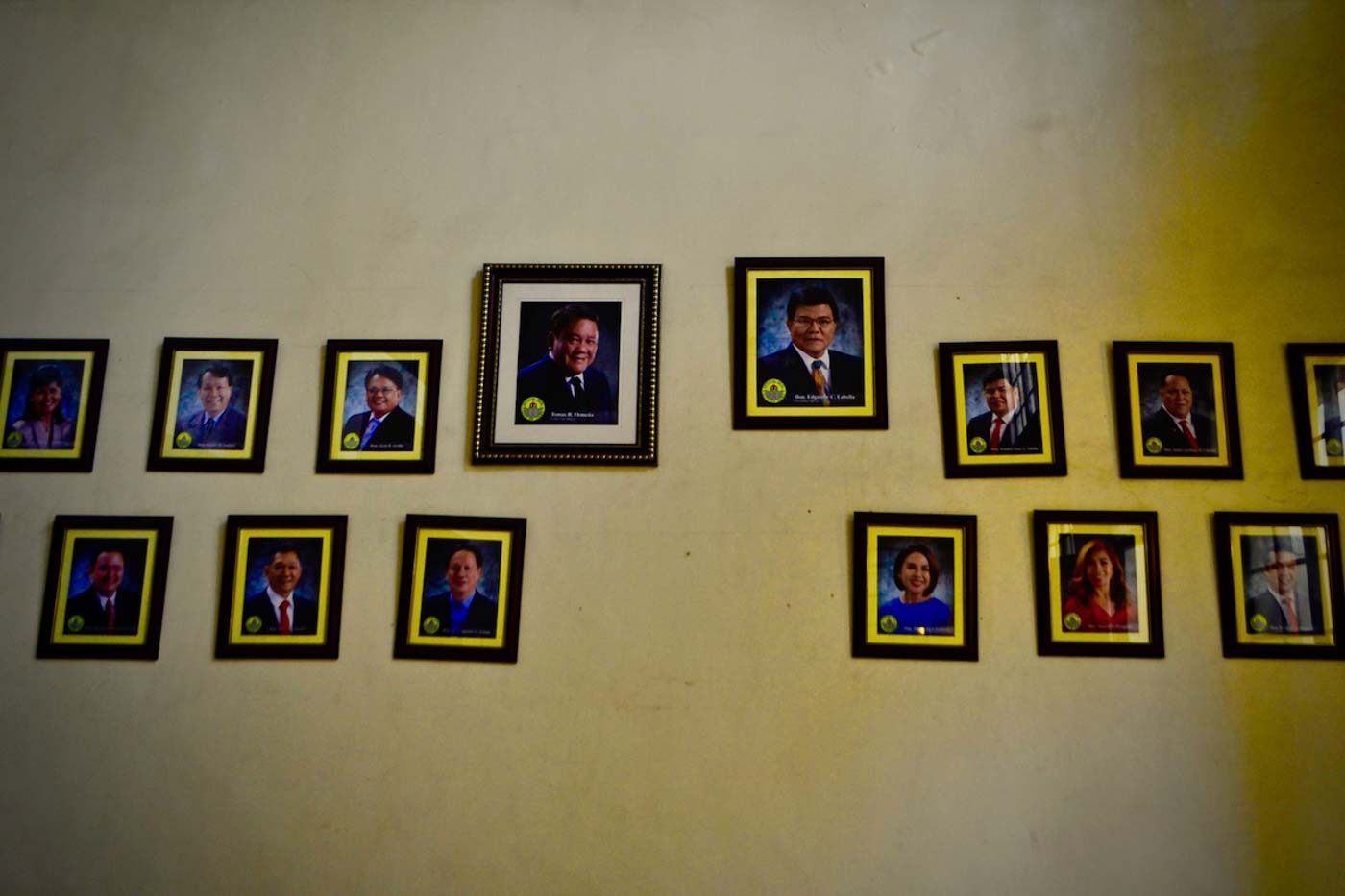 As Osmeña is treading carefully with security threats, he is also fending off a united opposition gearing up to unseat him in the 2019 elections.

The anti-Osmeña team is led by Cebu City Vice Mayor Edgar Labella, who used to be aligned with the mayor.

Osmeña currently leads the Liberal Party-allied Bando Osmeña-Pundok Kauswagan (BOPK), while Labella is the standard-bearer of Barug-PDP LABAN (formerly Team Rama), which, as its name suggests, is allied with President Duterte’s party.

At the top floor of Cebu City’s legislative building, councilors are split 7-7. Ex-officio members – the heads of the city’s Sangguniang Kabataan and the Liga ng mga Barangay – are with Osmeña. One independent councilor favors his BOPK.

BOPK managed to get a firmer grip on Cebu City barangays from the 2018 polls, with 51 on their side, and 29 with Barug.

Why the neck-and-neck competition? In an interview with Rappler, Labella said he believes Cebuanos want to keep Osmeña and his party in check.

For opposition councilor Garganera, it’s an indication that Tommy’s appeal – the son of Cebu who turned his back on a comfortable life abroad to serve his hometown – is waning.

“I want him to be like the Tommy Osmeña I used to know. That was before the internet…. Back then, there was no hatred in him,” said Garganera, who was a greenhorn barangay captain when Osmeña was a newbie mayor.

But Tommy Osmeña being Tommy Osmeña, the mayor is unfazed. Critics can call him whatever they want, he said. He only has one question for them: how come people vote for me?

While the years of public service in the Philippines may have jaded him, the promdi eager to serve his city remains.

Osmeña says he does not care if he loses in 2019. He had lost before.

But for now, he is Tommy Osmeña the mayor. And he will run his city.