MANILA, Philippines – Both sons of public officials, they rose through the ranks, vowed to stop corruption, and became the most powerful leaders their countries have seen in decades.

While they have different contexts, Chinese President Xi Jinping shares many things in common with Philippine President Rodrigo Duterte.

As Xi visits the Philippines from November 20 to 21, Rappler takes a close look at the Chinese leader.

Get to know Xi through the shades of Duterte in him. 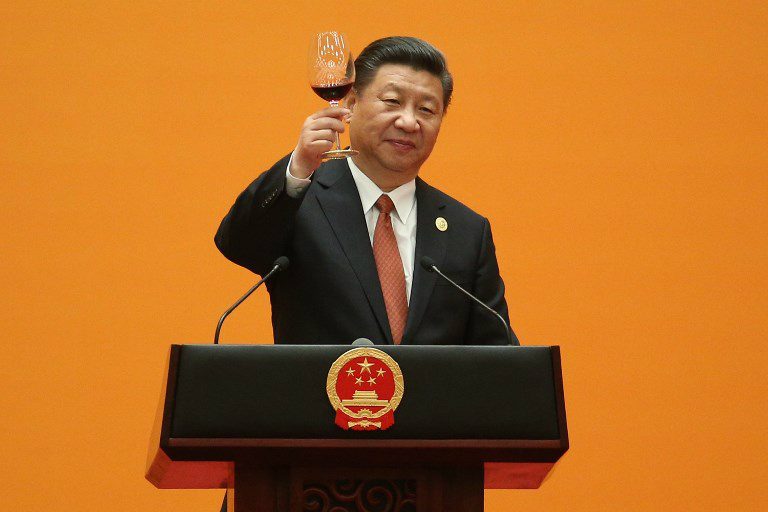 Both Xi and Duterte are sons of public officials.

But in 1962, Xi Zhongxun was purged from the communist party due to internal party conflict. This meant that the young Xi, once among China’s “princelings,” had to become a farm worker in Liangjiahe, where he lived in a cave home. Like Xi, Duterte is the son of a public official – Vicente Duterte. Vicente started as provincial secretary, ran and won as Davao governor for several terms, and eventually became a Cabinet member of dictator Ferdinand Marcos.

Both leaders are wide readers.

When Xi Jinping lived in a cave home after his father was purged, he engaged in self-study. Xi read books such as the Dictionary of Idioms, A Concise Dictionary of Philosophy, Goethe’s Faust, and the works of Shakespeare.

Smiling, Xi recalled in 2013: “I remember borrowing a copy of Goethe’s Faust, which I was really reluctant to return. The owner came to ask for it 3 times. Each time I invited him to scrambled eggs, and then saw him off. And I kept reading.”

Xi said on another occasion, “Reading all kinds of books, I guess, will be my hobby all my life.” Duterte is also a bookworm like Xi. A tour around his Davao City home, in fact, reveals shelves of paperback books. Duterte even mentions his favorite books in his speeches. These include Asia’s Cauldron by Robert D. Kaplan, El Narco by Ioan Grillo, and Altar of Secrets by the late Rappler investigative reporter Aries Rufo.

Both presidents rose through the ranks.

Xi Jinping entered the Communist Party of China in 1974. Since then, he has served in various capacities, including as vice mayor of Xiamen (Amoy) in Fujian province, and governor of Fujian in 2000.

Fujian, incidentally, is where many Chinese Filipinos trace their roots. The ancestors of former president Benigno Cojuangco Aquino III, whose government filed a case against China, are from Xiamen in Fujian province. Duterte’s maternal grandfather is also from there.

Xi is even remembered to have visited Manila “sometime between 2000 to 2002, when he was governor of Fujian,” according to the book Rock Solid by Rappler’s Marites Vitug.

Xi continued his rise to power until he became China’s vice president in 2008. On March 14, 2013, the National People’s Congress elected him Chinese president. As for Duterte, he began as city prosecutor in the 1980s, then was appointed officer-in-charge vice mayor of Davao City after the fall of dictator Marcos.

Duterte first became Davao City mayor in 1988. He occupied this post for two decades – except when he served as vice mayor or congressman due to term limits – until he became Philippine president in 2016.

Both are waging controversial anti-corruption campaigns.

Since the start of his presidency in 2013, Xi Jinping has vowed to crack down on corrupt “tigers” (high-level officials) and “flies” (low-level ones) in the Chinese government.

China said 1.34 million officials have been sanctioned for alleged corrupt practices since 2013, reported The Straits Times. Duterte also ran on an anti-corruption platform. Duterte has repeatedly said that even “one whiff of corruption” is enough for him to fire or sanction an official.

But while Duterte has fired officials for alleged anomalous acts, he has also reappointed many of them, drawing criticism.

Both Xi and Duterte are accused of cracking down on dissent.

Xi is under fire for allegedly having dissidents jailed.

Under Xi, young Marxists in China reportedly went missing after fighting for workers, while China allegedly detained one million of its mostly Muslim Uighur minority in internment camps for counter-extremism. In the Philippines, Duterte is said to have jailed his critic Senator Leila de Lima, then sought to revoke the amnesty of another opponent, Senator Antonio Trillanes IV.  His government has also expelled 4 foreign missionaries for allegedly joining political activities.

Duterte too has sought to silence media outlets, such as Rappler, for reporting stories unfavorable to him.

Both Xi and Duterte bank on personality to boost their power.

Experts say Xi Jinping has built a cult of personality through his years in office. Foreign Policy notes the frequent appearance of Xi’s name in communist party publications, as well as viral songs and videos hailing Xi.

In October 2017, the Communist Party of Chna even enshrined his ideas – and his name – in China’s constitution, which now includes “Xi Jinping Thought.” This placed him on the same level of Chinese founding father Mao Zedong, who has “Mao Zedong Thought” in the constitution.

“Xi Jinping Thought” asserts the supremacy of the communist party, upholds socialism as the only thing that “can save China,” and proclaims that China must “always be the builder of world peace, the contributor of global development, and the defender of the international order,” according to a BBC summary based on Xi’s speeches. Like Xi, Duterte has the most ardent of followers. Despite extrajudicial killings and rising inflation, Duterte’s trust ratings even bounced back to “very good” in the latest survey of pollster Social Weather Stations.

With his grip on Congress and the Supreme Court, Duterte is considered the most powerful Philippine president since dictator Marcos, who was ousted in a People Power Revolution in 1986.

Both Xi and Duterte are suspected of plotting to overstay as president.

Xi Jinping is supposed to end his second term as president in 2023, but the rubber-stamp Chinese parliament in March abolished presidential term limits. This paved the way for Xi to become president for life. 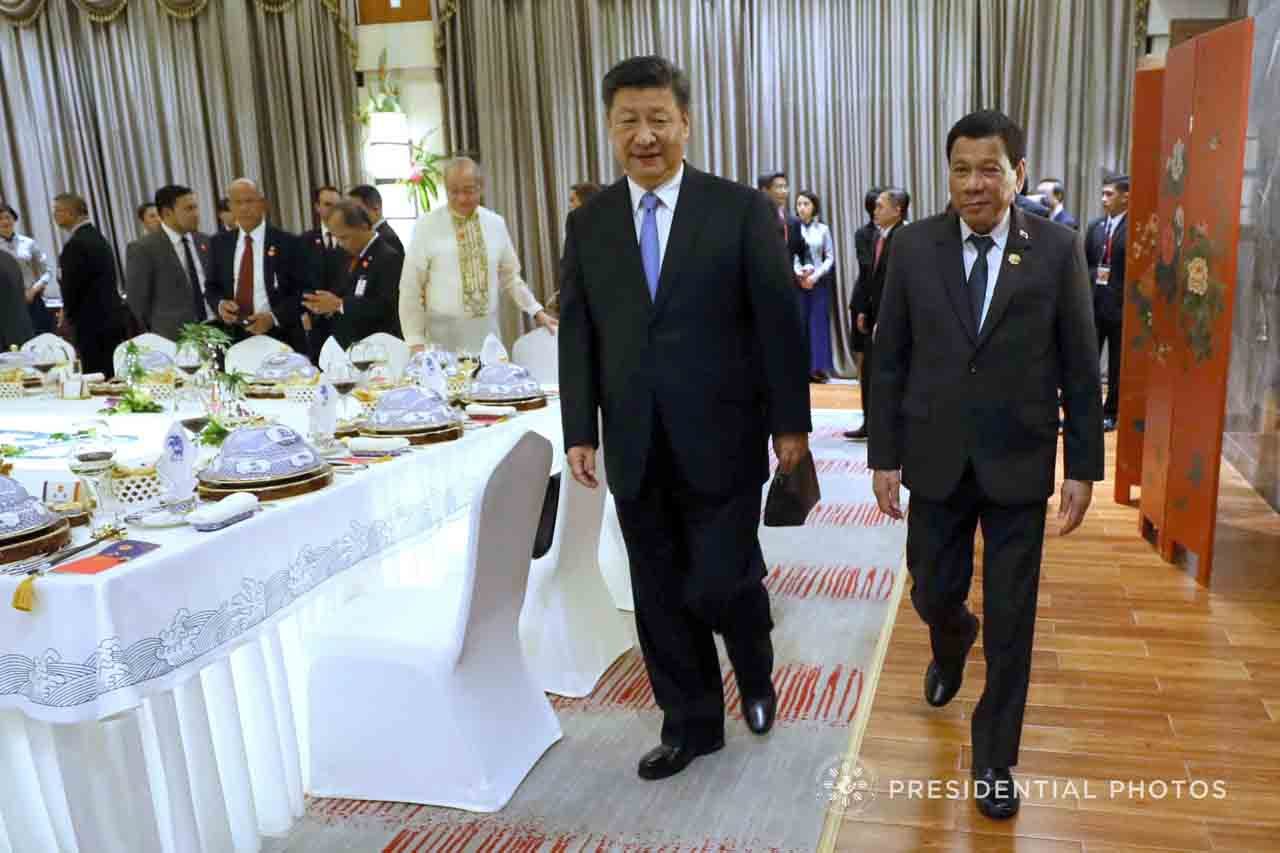 Duterte is expected to end his term as president in 2022, and the Constitution bars his reelection. Critics accuse Duterte of pushing for a new charter so that he can run again, but Duterte has repeatedly said he does not want to be reelected.

Still, rumors persist that he is grooming his daughter, Davao City Mayor Sara Duterte Carpio, to be his successor as president of the Philippines.

While they have these similarities, Xi Jinping and Rodrigo Duterte are also different in many respects.

Duterte, for one, has a more privileged background (his father was not purged like Xi’s), while Xi has a richer experience in bureaucracy (Duterte jumped from mayor to president; Xi had a gradual rise to power).

But their different circumstances cannot overshadow the most striking thing they share: their love for each other. “Actually President Duterte is the most respected and the most important friend for President Xi Jinping and the Chinese people,” said Chinese Foreign Minister Wang Yi during his recent trip to the Philippines.

As for Duterte, what more can he say? “I just simply love Xi Jinping.” – with reports from Pia Ranada and Agence France-Presse/Rappler.com