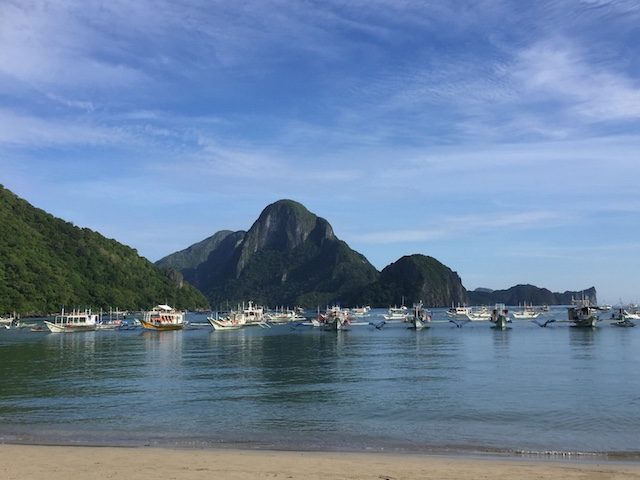 Facebook Twitter Copy URL
Copied
As the number of visitors reaches record-high, tourism takes a toll on the environment of the once laid-back town of El Nido

It’s the same word that some residents, businessmen, and local officials nowadays use to describe their hometown. They’ve experienced a tourism boom in recent years that has transformed their local economy but has also resulted in pollution and uncontrolled development.

Located in the northern tip of Palawan, El Nido, a first-class municipality with 18 barangays and 41,000 residents, has hogged the headlines in recent months after the national government warned local officials to address environmental problems caused by tourism activities.

“It seems that we do not have a low season anymore,” said Irma Marcelo, executive director of El Nido Foundation, one of the NGO representatives in El Nido’s Protected Area and Management Board (PAMB).

“Years ago, some hotels and restaurants in the town were closed from June to August and their workers could still go on vacation because these months are considered as the low season,” she added.

Tourist arrivals in El Nido have grown exponentially in the past 20 years. Municipal tourism data showed that from 10,749 tourists in 1997, the number of visitors reached 144,257 in 2017. Annual growth in tourist arrivals has not gone below 15% since 2011.

Since 2008, El Nido has been one of the top 3 destinations in Palawan, along with Puerto Princesa City and Coron. The town boasts of limestone cliffs, lagoons. white-sand beaches that are less crowded than Boracay.

The town was declared part of the El Nido-Taytay Managed Resource Protected Area (ENTMRPA) in 1998 by virtue of Presidential Proclamation 32 to “ensure a long-term protection and maintenance of biological diversity, while providing at the same time a sustainable flow of natural products and services to meet community needs.”

“What we are promoting here is nature. We are not promoting parties,” Dela Calzada said.

Before the recent tourism boom, the town was popular among European backpackers. Provincial tourism data showed foreign tourists accounted for 61% of the tourist arrivals in El Nido in 2017, compared to 41% and 33% in Coron and Puerto Princesa, respectively.

“People used to think that they cannot afford to go to El Nido because it is very expensive,” said Henri Fernandez, president of the Cottages, Resorts and Restaurants Association of El Nido (CRRAEN).

In recent years, the influx of budget travelers and day tourists has sustained the tourism growth.

“There is an increase in low- and middle-end tourists which signals a market shift – from few high-spending and long-staying visitors to high-volume, low-spending and short-staying ones,” said the 2015 Environmentally Critical Areas Network (ECAN) Management Plan for El Nido prepared by the UP Los Baños Department of Community and Environmental Resource Planning.

Local officials believe that increased accessibility to El Nido and the town’s media exposure helped transform it into a popular tourist destination.

Following Boracay’s reopening on October 26, 2018, a local boutique airline resumed its daily flights between El Nido and Caticlan, the gateway to Boracay. “Some tourists leave Puerto Princesa City at night, arrive here in the morning, spend the entire day island-hopping, and then return to Puerto Princesa in the evening.” Marcelo said, adding that most of them do not book accommodations anymore.

“We get free advertisements from reality shows shot here,” Dela Calzada said. “We do not practice aggressive marketing.”

In 1999, the town was featured in Expedition Robinson, the Swedish precursor of the US reality series Survivor. Since then, the town had served as the location for a leg of the Amazing Race in 2004, and the 7th season of Koh Lanta, the French edition of Survivor in 2007. Another season of Expedition Robinson returned in 2009, followed by Survivor Israel’s 8th season in 2016 and 2017.

The town’s limestone formation was also featured in the 2012 film Bourne Legacy. In January and February 2018, filming for Survivor South Africa restricted access to some of the tourist spots. “Tourists keep on coming after we were featured on television shows,” Henri Fernandez said.

Travel magazines and websites have also included El Nido and its beaches in their lists of best tourist destinations.

In 2014, El Nido’s Secret Lagoon Beach was named the 4th best beach in Asia in Tripadvisor’s Travelers’ Choice awards (Boracay’s White Beach topped the list for that year). El Nido also landed in the 4th spot in Conde Nast’s “The 20 Best Beaches in the World 2017” list.

“The water is so blindingly blue it makes the Caribbean Sea look murky in comparison. And the sunsets? Well, they’ll ruin you for life. Consider yourself warned,” Conde Nast said.

Travel ratings website TripAdvisor named El Nido’s Nacpan Beach, about 20 kilometers from the town center, as one of the top 10 best beaches in the world in 2016. 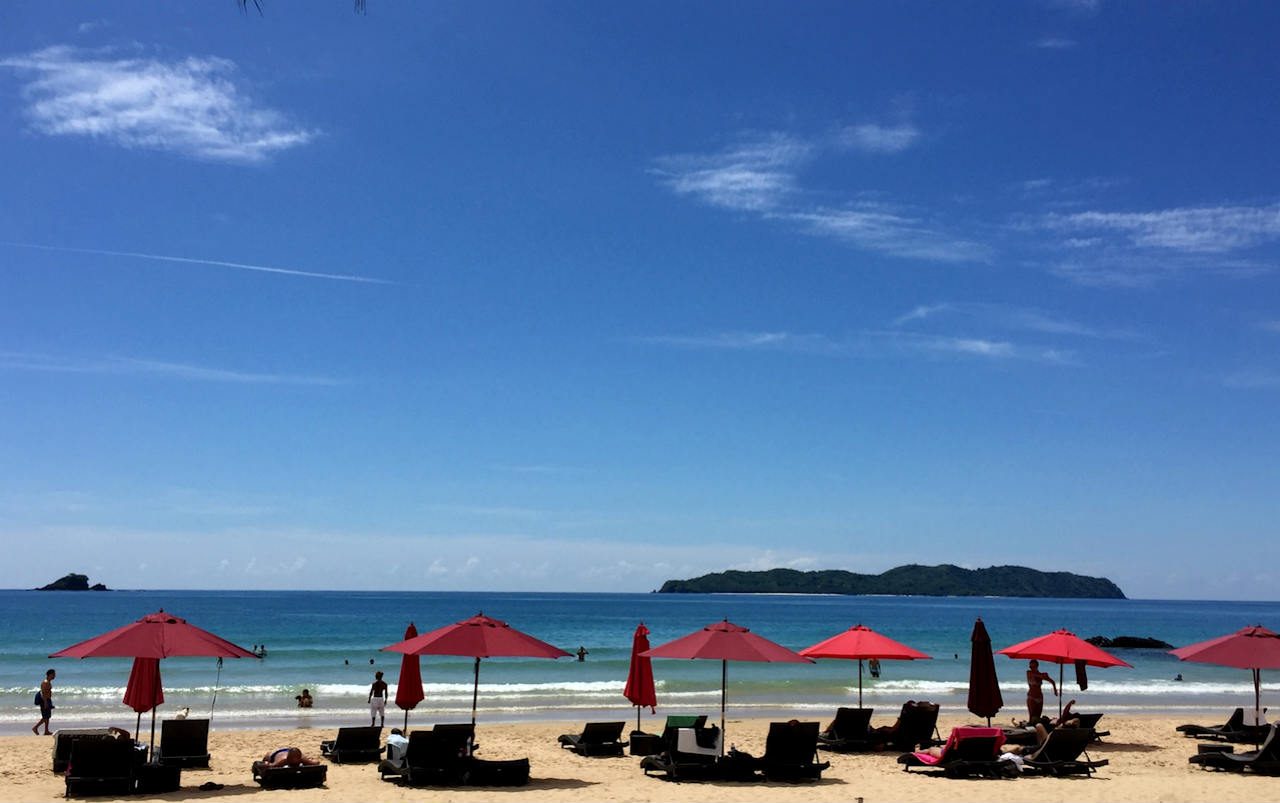 Fishing, farming, and harvesting of edible birds’ nests used to be the main economic activities in the town prior to the growth of the tourism sector.

Rico Fernandez, a former member of the municipal council, said the surrounding bodies of water in El Nido were so rich in marine resources that they attracted even fishermen from the Visayas. Back then, they received reports of rampant dynamite and cyanide fishing.

“When tourism boomed, illegal fishing declined,” he said, adding that some fishermen and residents were able to find alternative sources of livelihood in the tourism sector.

Local tourism generated jobs in restaurants, hotels, and other tourism-related establishments. There were 145 accommodations, 75 food establishments, 16 dive shops in El Nido as of 2015, data from the town’s business processing and licensing office showed. At least 390 tricycle drivers and 277 boat operators also benefit from the local tourism activities. Tourist arrivals also generated additional revenues for the municipal coffers through the collection of a P200 eco-tourism development fee (EDF) from every visitor. In 2017, the town collected P84 million in EDF, municipal tourism data showed.

Under a 2008 ordinance, the EDF should be used to finance tourism and environmental projects, including protection of natural resources, enforcement of environmental laws, and solid waste management. A portion of the fund (15%) is remitted to the local treasury and becomes part of the general fund.

Price of the boom

With the tourism boom comes a horde of environmental problems – an increase in the volume of solid waste, declining water quality, and encroachment of coastal areas and timberland. In March 2018, the DENR identified 32 establishments violating the coastal easement rule.

A year before the tourist arrivals hit the 100,000 mark, the town’s beach cove tested positive for coliform in 2014 due to sewer lines from houses and establishments directly emptying into the beach.

It was only in November 2018 when the DENR-MIMAROPA (Mindoro Marinduque Romblon Palawan) declared that the fecal coliform level in the town went back to “normal.”

“In terms of environment impact, we feel that there’s too many people in El Nido already,” Dela Calzada said, adding that the town now wants to implement a cap on visitors in some tourist areas.

Residents also complained about tourism’s impact on their resources, especially their food supply.

“You will not be able to buy fish if you do not go to the market early. Most of the fish and vegetables here are sold to the restaurants and resorts,” a tricycle driver and resident of El Nido said, adding that the prices of food started increasing as more tourists arrived.

Unlike Boracay, El Nido will remain open to tourists while it is undergoing rehabilitation.

“A lot of things have changed for the past 20 years. When I was still young there were also cottages here but most of them were made of indigenous materials,” a local businessman said. “This is very different from the El Nido of my childhood.”

Asked about his view on the tourism boom in his hometown, he replied: “We’re not prepared for it.” – Rappler.com

To be continued: EL NIDO: Garbage woes threaten the future

This story is part of a series on tourism and waste management in the Philippines and was supported by the Internews’ Earth Journalism Network (EJN).