Facebook Twitter Copy URL
Copied
The health department gears up to introduce a new vaccine for Japanese Encephalitis and universal health care in 2019. Will the past year's effort at damage control be enough?

MANILA, Philippines – In the year following the Dengvaxia controversy, the Department of Health (DOH) found itself splitting time and work between damage control and controlling outbreaks, while also making sure that regular functions for other health programs continued.

He added, “On a global level, it seems that only the Philippines is reacting this way to the Dengvaxia issue.”

The vaccine was made available in 10 other South American and Asian countries in 2016, and Brazil, like the Philippines, implemented a national vaccination campaign.

The difference between Brazil and the Philippines’ reactions to Sanofi’s 2017 announcement was stark: whereas the Philippines suspended its school-based dengue vaccination program and is even threatening to sue Sanofi Pasteur, Brazil continued to use the vaccine but limited it to children aged 15 years or older.

Domingo suspects that even Filipinos living in other countries fear Dengvaxia.

According to Google’s numbers, the term was searched most in the Philippines (100%) in the past year, followed by Qatar (10%) and the United Arab Emirates (7%), two countries that are popular to overseas Filipino workers.

The public’s reaction has made it difficult for the DOH to address the issue in the year following Sanofi Pasteur’s announcement.

According to Domingo, after the Dengvaxia scare, parents were afraid of any kind of intervention, not only of vaccinations.

“When there was an intervention, if you have to take a pill or if you have to receive an injection… they were scared. [It’s like they were thinking] ‘Oh no, the DOH are here again! They’re here, they’re going to do something terrible to us,” Domingo said.

As a result, even deworming programs were affected and participants of DOH studies such as those for Tuberculosis – begged off.

“The Department of Health is the deliverer of health services so like many other things, got tainted, people were doubting a lot of the activities….There was a lot of collateral damage,” he said. Then, while the department was disseminating communications plans to assure parents of the safety of their children, region by region they discovered there was another group of people who needed reassurance: barangay health workers who administered the dengue vaccine to kids in their communities.

(When this happened, my goodness, they were also blamed. Of course, they were the ones who injected and called people…of course their spirits were down and also their drive to help because people would fight with them.)

He added, everytime they come in with a new program, people would say “‘Ano na naman yan, sigurado ba kayo diyan?’ (What program is that again? Are you even sure about it?)….The municipal health workers were crying.”

Domingo admitted this wasn’t something the DOH expected because priorities were set on cascading information to concerned parents and minimizing risks to the department’s other health programs. “These health workers, these are good soldiers. If we told them we’re low on the measles vaccine, they would really go out to the barangay, look for the children who are not vaccinated and vaccinate these kids,” he said.

The same was true when workers were told a new dengue vaccine was given and they worked to get children covered.

Morale, Domingo said, has improved since then, but he suspected the Dengvaxia issue would only see the same effects perhaps 3 to 5 years from now.

“I expected [it to be okay after] a year, but I don’t think it’s going to happen….I think [it will take] 3 to 5 years. By that time, we’ll probably see a more complete picture and we’ll know there’s no more danger,” he said.

Aside from beefing up its public relations strategy for the Dengvaxia controversy, the health department is also looking into rebranding its entire image.

This includes the challenge of conveying to the public once more that the DOH is every Filipino’s family physician. “We’re there for you, we’re there anytime that you need us, and we will not do anything to harm you or to put your child at harm,” Domingo said. 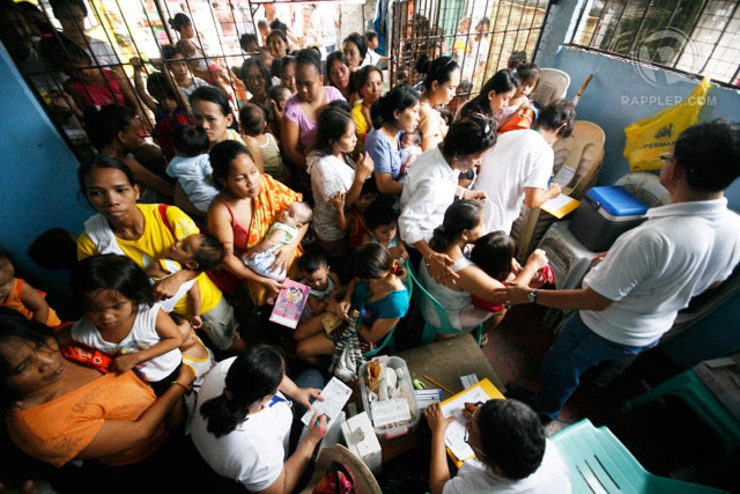 Part of the work for this includes treating and monitoring the condition of the over 830,000 school children who got Dengvaxia. The DOH previously said it would conduct “heightened surveillance” of kids’ health over a 5-year period.

For this, the DOH teamed up with associations of hospitals to put up dengue express lanes in both public and private hospitals.

Duque also instructed the Philippine Health Insurance Corporation (PhilHealth) to shoulder P10,000 to P16,000 in hospital expenses should a child be hospitalized due to mild or severe dengue. As for deaths of children that several groups such as the Public Attorney’s Office linked to Dengvaxia, the DOH maintained that there was still no solid evidence on whether or not the vaccine itself was a direct cause.

The DOH’s data as of September showed that 19 out of 154 children who died after receiving at least one dose of Dengvaxia, had dengue despite the vaccination.

Of these 154 deaths are “the first 62 deaths” examined by the University of the Philippines-Philippine General Hospital Dengue Investigative Task Force (PGH-DITF) expert panel. They found one was “consistent with causal association to immunization,” which means the patient’s death occurred within 30 days and thus could be related to the Dengvaxia vaccine.

Nevertheless, experts said the vaccine may only be “possibly related” and further studies over the next few years will be needed to establish it. As far as the DOH is concerned, such efforts seem to have paid off, at least for now.

It closed the year with an announcement that its approval ratings climbed to 79% – one of the top among government agencies next to the Department of Education and tied with the Department of Social Welfare and Development, according to pollster Pulse Asia.

“We’ve recovered some confidence but if you’re delivering health, you need 90s. If you’re going to give a pill that a person’s going to give to their child, you need high approval ratings, you need trust, and we still have to work on that,” Domingo said.

Indeed, the DOH may find itself holding its breath once more. The next year will see its efforts put to the test as it is slated to introduce a new vaccine, this time for Japanese Encephalitis. Silva said it’s long overdue. It was supposed to be introduced to the department in late 2017.

“We really we cannot postpone giving the much needed vaccine because a lot of children are suffering as we speak. We do see increasing number of cases,” she said.

The DOH is also gearing up to implement the universal health care bill, once signed into law by President Rodrigo Duterte. Once in full swing, its goal is to provide all Filipinos with access to the full spectrum of health care.

Asked about its relationship with Sanofi Pasteur, Domingo replied, “We have absolutely no relationship,” at least when it comes to Dengvaxia. The only relationship they have with the company concerns other medicines such as those for rabies, which only Sanofi produces, and which are needed by Filipinos.

For the Department of Health, that may have to be enough for now, as it focuses on the programs it set out for the year ahead.

Domingo said, “We can’t just be completely emotional about this.” – with reports from Vernise L. Tantuco/Rappler.com