6 scenarios for the Bangsamoro vote 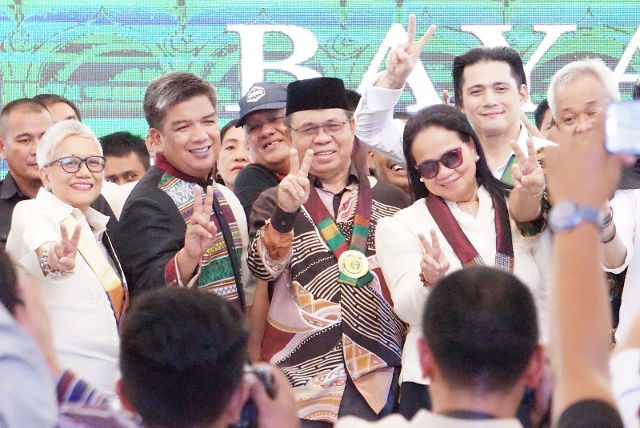 Facebook Twitter Copy URL
Copied
(UPDATED) The new Bangsamoro government is within grasp. Will there be last-minute hitches?

COTABATO CITY, Philippines (UPDATED) – On January 21 and February 6, various areas in Mindanao will vote to approve or reject Republic Act 11054 or the Bangsamoro Organic Law  (BOL) that will create a new Muslim region to replace the Autonomous Region in Muslim Mindanao (ARMM).

On December 19, 2018, Mujiv Hataman delivered what is meant to be the last major address of a sitting ARMM governor. It was an emotional but celebratory goodbye coming from one of the biggest supporters of the peace process.

“If the BOL is ratified, the next leadership will have wider space and more funds to implement projects,” Hataman said in Filipino.

“No matter how hard we tried, we couldn’t do enough to help them. The space is limited for the regional government to decide and take actions,” he added. (READ: Future Bangsamoro gov’t urged to give Marawi a special focus)

The Bangsamoro stakeholders seemed as ready as they could be. Even at the ARMM regional assembly, members are discussing how they’ll need to renovate the building to fit the 80 members of the future parliament.

But in the middle of preparations is muted fear, a sense of paranoia that comes from past defeats. Spoilers could sabotage a victory that seems already within grasp. The people here have learned to hope for the best but expect the worst.

Here are 6 scenarios for the Bangsamoro vote, some more likely than the others.

The deadly New Year’s Eve blast in Cotabato City underscored the challenges ahead. “A determined terrorist acting alone or with the help of some inside the city can penetrate the most elaborate security,” said Defense Secretary Delfin Lorenzana.

If the security situation deteriorates against the best efforts of the security forces, violence could discourage voter participation or force the postponement of the vote in affected areas.

BIFF spokesman Abu Misry Mama denied the group’s involvement in the blast. There are BIFF factions that expressed willingness to give the new government a chance, but other groups linked to international terrorist network Islamic State (ISIS) remain a concern.

The military commander on the ground, 6th Infantry Division chief Major General Cirilito Sobejana, raised concerns about the midterm elections affecting the security climate of the plebiscite, as local politicians themselves are leading the campaign for and against BOL.

Observers are saying this is the likely scenario: the plebiscite wins and ARMM becomes BARMM, but it will gain no additional territory.

The vote is simple for ARMM areas – Maguindanao, Lanao Del Sur, Marawi City, Lamitan City, Basilan, Sulu, and Tawi-Tawi – which will vote as one geographical area.

Are they going to embrace BARMM or stay as ARMM?

“If the plebiscite pushes through, I think the current ARMM will vote for BOL,” said Hataman.

This scenario is already a victory for the peace process, said Benedicto Bacani, executive director of the Institute for Autonomy and Governance. Additional territorial jurisdiction will just be bonus.

It is a most crucial vote and all eyes are on the city considered as MILF’s “crown jewel.” The rebel group will work hard and pour campaign resources here, but it’s been a tough battle against a popular mayor who took a stand against BARMM.

The situation is made complicated by a provision in the law that requires BARMM to turn over properties in areas outside its jurisdiction. If Cotabato voted “no” to BARMM, the new government will start without a definite location for its regional offices and face the distraction of having to decide where to build a new one.

“Cotabato City currently serves as the de facto seat of ARMM. If Cotabato City decides not to join, then we we would have difficulty setting up the seat of BARMM government,” said ARMM Assemblyman Zia Alonto Adiong.

While it is said that BARMM may continue to use Cotabato City as its seat of power, Adiong said there are concerns that “the complex will not automatically be exclusive for the use of BARMM” and become the subject of contest between Cotabato City and BARMM.

“How can we therefore claim that genuine autonomy is present when even the basic requirement for organization to function like the identification of a possible seat of government is absent?,” said Adiong.

The Maranaos will also insist on Marawi City, a reasonable alternative in scenarios drawn in the past. But the work to rehabilitate the city ravage by a 5-month-long siege in 2017 will be overwhelming.

Scenario 4: BARMM wins a sweeping victory in all areas

But winning all areas is an unlikely scenario considering strong opposition from the mother units of several towns and barangays that want to join BARMM.

Bangsamoro advocates have practically given up on Lanao del Norte, where the “double majority” vote requirement is a challenge.

It’s the same challenge in North Cotabato barangays or villages that want to join BARMM. The mother municipalities will need to approve their inclusion.

This is where debates over the commitment of President Rodrigo Duterte come in. He was in Cotabato City 3 days before the plebiscite to lead the “yes” campaign but there is sentiment that he fell short of endorsing the inclusion of Cotabato City.

“There is perception that the President has not really categorically asked that Cotabato be included. He was just calling for ratification of the BOL. That is not directed at Cotabato because that is not the question for Cotabato,” said Bacani.

Hataman also earlier urged Duterte to call local government executives to a meeting and personally appeal for their support.

“If I were the President of the Philippines, I would call to a meeting all the LGUs concerned. The President himself will explain its importance. It is better to vote yes for the sake of peace,” said Hataman.

Advocates heaved a sigh of relief on January 15, the last en banc session of the SC before the plebiscite. A last-minute intervention by way of a temporary restraining order (TRO) to cancel the vote was feared. There was none.

The legal battle isn’t over, however. Concerns remain that the SC might declare certain parts of the law unconstitutional.

This didn’t stop petitions to stop the BOL.

There is fear now that a successful plebiscite will not moot Tan’s petition. It might still be discussed especially if results in the province would be against the BOL.

Scenario 6: The people vote ‘no’ to BARMM

It’s a most unlikely scenario. “Without a Supreme Court TRO, BARMM will be established. That is 100% certain,” said Bacani.

But there are those who are watching out for last-minute spoilers that might turn the people against BARMM.

Hataman said any scenario that fails to ratify the BOL will become a security concern because it will reinforce the narrative of violent extremists and allow them to recruit among a frustrated population.

“I’m nervous about the vulnerability of communities, especially the youth, to violent extremism. The sentiment will be: ‘They did this to us in Marawi. Now they played us for fools with the Bangsamoro Organic Law. They gave us false hopes.’ This is the narrative that should be addressed by those in power,” Hataman said.

The buck always stops with Duterte. The first president from Mindanao has had no qualms using his political will and government machinery, no matter how controversial, to push for his pet issues.

The new Bangsamoro government is within grasp. The results will show if Duterte did enough to deliver the peace he promised his own people. – Rappler.com