Facebook Twitter Copy URL
Copied
With the crucial rehabilitation of war-torn Marawi City moving slowly, experts warn that sentiments of the Moros may be shifting

(Read Part 1: Seeds of insurgency: The youth of Marawi)

MARAWI, Philippines – Zaldy and Sakeena’s view of jihad was shaken when they saw Moros struggling in evacuation centers days after the Marawi siege in May 2017.

“Look at what happened to our fellow Muslims, they are the ones suffering. What more if we were part of those who did this to them?” Zaldy told us, referring to the time when he trained to be a mujahideen.

Zaldy was able to return to Marawi 7 days after the siege. That’s when he saw the face of war. “They called for volunteers for the rescue operations. I joined, and that’s when things began to change for me. Each time I went to an evacuation center, I would cry. I’d see newborn babies. I would hear stories about how families left their homes without anything. Even my sibling was forced to flee with just his clothes on.”

He thought, the terrorists should have at least warned the civilians before attacking.

Zaldy went through sessions with non-governmental organizations on what it meant to be a true Muslim. That’s when he turned into an advocate of peaceful means to address problems. The young man who once trained to die for Allah now tells other Moro youth to let go of the mindset of revenge. “We can’t live in the past.”

Zaldy said education is the key to moving forward. He is taking a criminology course in Marawi, aspiring to be a policeman one day. He said he wants to be a role model to other cops, and correct the misguided practices that they have been accustomed to.

Sakeena, on the other hand, quit her job in Sultan Kudarat 5 months after the siege, to work as a social worker in Marawi. She said she still dreams of becoming a filmmaker someday, so she can use her craft to amplify the voice of the Moros.

Sakeena now looks up to professionals who “fight” for Islam without the use of violence. These are doctors, lawyers, and social workers, many of whom she personally knows.

“I can now say I am one of them – those who are working for the future generations. No matter how small in number those fighting without violence are, there still has to be. Because if there will be none left, our generation may forget the struggles the Bangsamoro has gone through as a people,” she said.

“Even though I wasn’t able to join the siege, there are still other ways to do jihad. That’s what I’m doing now.”

Modern extremist groups like ISIS and its affiliates target the Filipino Muslim youth’s compounded frustration, which has been worsened by the historical grievances and poor governance that the Moros have gone through as a people.

A misrepresented understanding of Islam and jihad serves as the final key ingredient and justification for taking up arms.

“If there is misinterpretation, there is a resulting misguidance,” said Hamid Barra, president of the National Ulama Conference of the Philippines.

For Sakeena and Zaldy, the promised perfect afterlife was the biggest lure. “When you die as a mujahideen, heaven is guaranteed. As long as your intentions are right, and it is for the sake of Allah,” Sakeena said.

Islamic leaders who sympathize with ISIS use out-of-context verses from the Koran to reinforce their messaging.

The Surah Al-Taubah 29 is a favorite. It begins with “Fight those who do not believe in Allah or in the Last Day,” and ends with “fight until they give the jizyah (tax) willingly while they are humbled.” When read on its own, it appears to support the extremist group’s cause.

Because it is written in Arabic, understanding the meaning of religious Islamic text is tricky. One has to learn the language first to be able to read it. To make sense of its contents is an entirely different discipline altogether.

While Surah Al-Taubah 29 was revealed and given meaning during the time of an offensive by Byzantines and pro-Roman tribes against Muslims, extremists know there is still a literacy gap, so they exploit verses like this very well. They interpret the verse only on the superficial level, according to Barra, ignoring the context or circumstances surrounding its revelation. 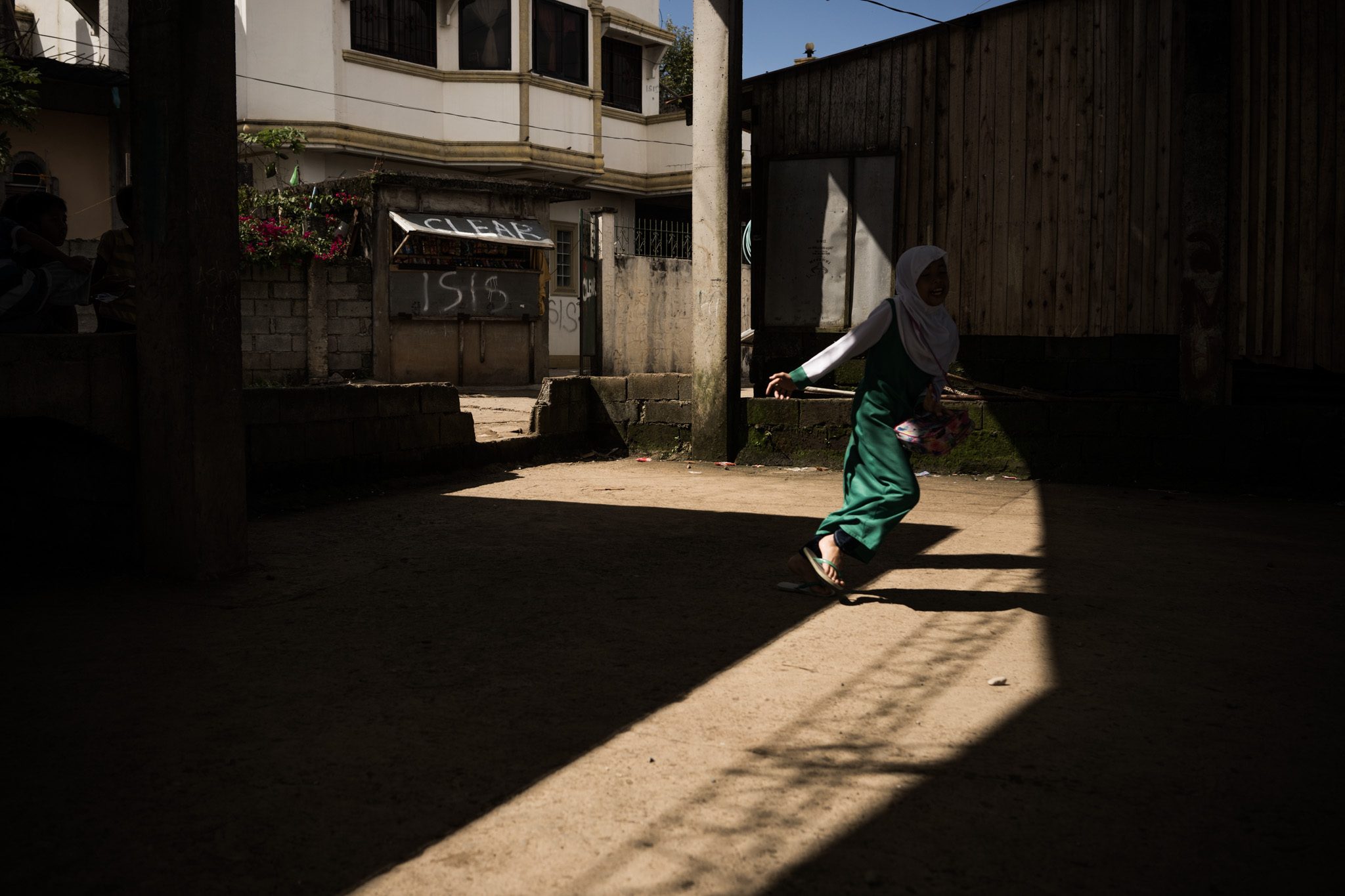 For some living in poverty, nothing can be more rewarding than taking part in this version of jihad. Coupled with a promise of sustained financial support, it becomes a truly potent recruitment tool. “Whether he lives or dies, he still wins. Then, you’ll be rewarded financially as a bonus. How do you fight this kind of threat?” Latiph wondered.

To the well-educated, recruitment methods exploit emotional facets that young Moros can relate to, like conflicts in other Muslim nations around the world. The perception that “Islam is under attack” came out as a significant factor in supporting violence, according to a study done in 2017 by Development Alternatives Incorporated, a private development firm based in Maryland in the United States.

Miriam*, a 27-year-old advocate from Marawi City, recalled many debates with two of her closest female friends about their opinion on the situation in other Muslim countries.

She recalled being asked: “Gaza is being bombed, so is Palestine. The countries of our fellow Muslims are being destroyed! Will you let that happen to us here as well?” Miriam eventually found out they joined the Maute fighters in the Marawi siege.

“We had so many dreams together. Their hearts were so kind. We had plans to publish magazines for Muslim women.” She described them as well-off and intelligent advocates of women empowerment. But she noticed two topics that became constants in 2016: their growing frustration with the situation in other Muslim nations, and their inclination to get things done quickly at home.

Miriam’s friends echoed ISIS’ aim of establishing Muslim-led states known as caliphates, where Islamic traditions like the Shariah law would be strictly implemented. “They were in a hurry. They wanted an instant caliphate, instant Shariah.”

Peace advocates are now keeping an eye on the crucial rehabilitation of war-torn Marawi. Hundreds of thousands of people remain displaced, with their homes still in rubble. These internally displaced persons (IDPs) are becoming more and more vulnerable, and less patient each day.

“We do not want to be forever IDPs. It’s very disempowering. The people have the right to a safe and dignified return. It has something to do with identity, because if you can’t return, then what are you?” said historian Tirmizy Abdullah of the MSU Institute for Peace and Development.

Even the groundbreaking ceremony for the city’s rehabilitation itself, with its numerous delays, was a red flag for many. It eventually pushed through on October 30, 2018, with the completion promised by late 2020.

A report published on November 18, 2018, said the master plan for the rehabilitation would be out in a couple of weeks, according to the inter-agency group Task Force Bangon Marawi. We have yet to see the plan. “The resentment and anger of the people can be turned against the government,” he said, adding that there are groups trying to take advantage of the situation, as recruitment is reportedly still ongoing.

“How long will the narrative stay that way, where people believe that the problem was the Maute-ISIS?” Latiph asked, warning of shifting sentiments.

“Now, the biggest problem for us peace advocates is that the narrative is slowly morphing. Slowly morphing into something like a monster, where people will believe that it was actually the government causing all the trouble. And this is because of the slow rehabilitation.”

Will the Marawi siege be added to the Moros’ long list of unaddressed historical grievances?

Latiph said people need to be assured of a better future. One way is through “gainful employment” where they could find meaning in their work.

The Bangsamoro Organic Law, signed by Philippine President Rodrigo Duterte in August 2018, promises to fill in those gaps.

In it, a more autonomous and more powerful governing entity will replace the ARMM. A plebiscite will be held in Mindanao on January 21 and February 6 for provinces and cities to vote for their inclusion into the Bangsamoro.

Sakeena and Zaldy can only hope that the new region will not give the youth any more reason to be lured to take up arms in the name of jihad.