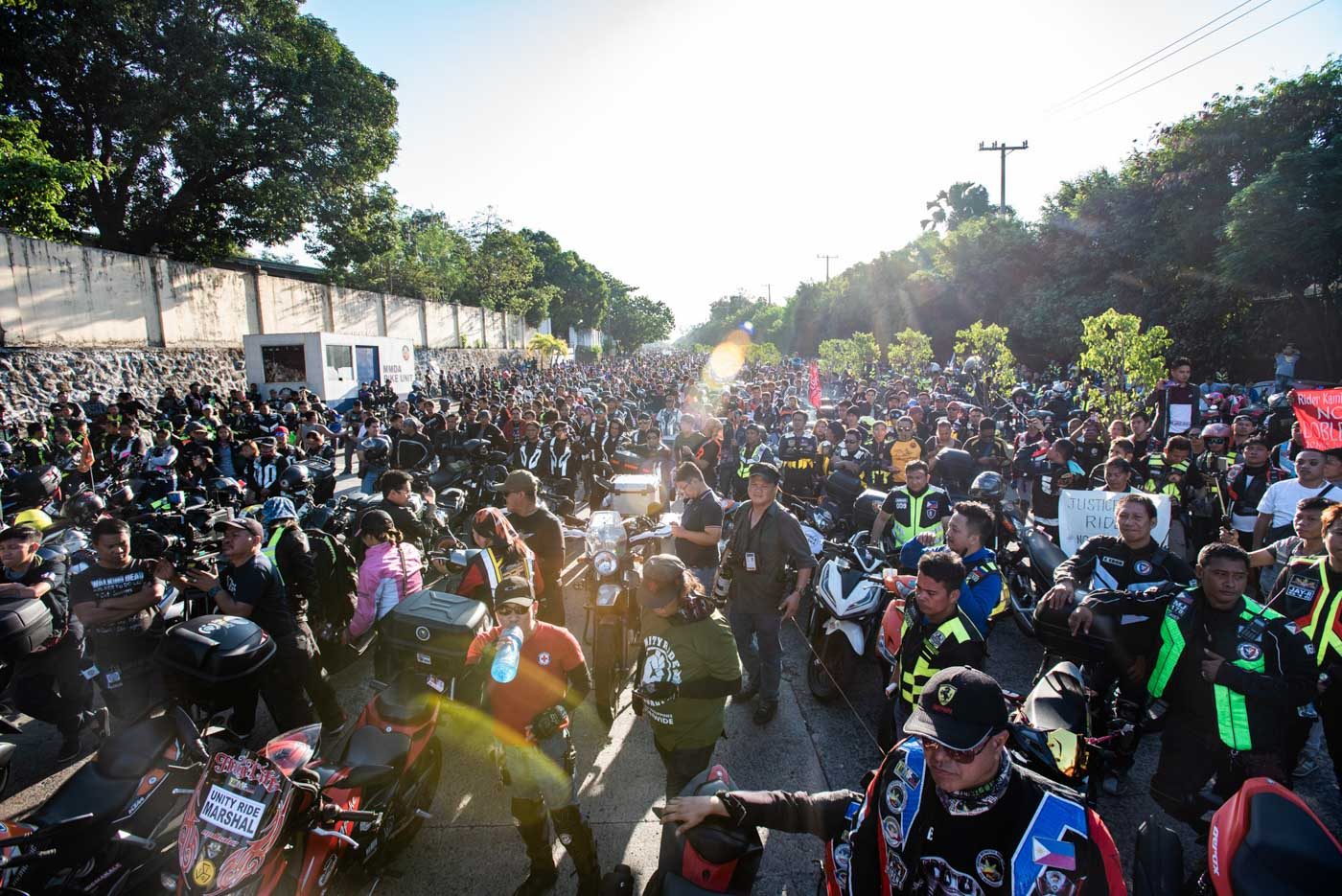 Facebook Twitter Copy URL
Copied
The Motorcycle Crime Prevention Act aims to take criminals on motorbikes off the road. Some motorcycle riders want to have the law declared unconstitutional.

MANILA, Philippines – Now more than ever, the motorcycle has become omnipresent in the lives of Filipinos. But because of a new law, its riders fear they are being systematically evicted from the country’s roads.

Given worsening traffic coupled with the absence of affordable transportation options, Filipinos turn to the two-wheel vehicle to hurdle the traffic beast, especially in Metro Manila.

And the vehicle has even gone beyond fulfilling commuting needs. Motorcycles have also been tapped by Filipinos for food, groceries, and errands.

These all contribute to the rising number of motorcycle riders in the Philippines, which, according to the Land Transportation Office, now total between 8 million to 10 million.

It was an uprising on wheels. Aboard their motorcycles, at least 10,000 Filipinos turned the historic People Power Monument into their starting line, with those coming from the metro’s neighboring provinces hitting the road even before dawn.

Armed with neon vests, reflective helmets, and protest banners, the riders raced through EDSA toward the Senate of the Philippines. Their battle cry was clear: “We are not criminals. Stop the discrimination.”

The source of their unrest is Republic Act No. 11235 or the Motorcycle Crime Prevention Act, more popularly known among riders as the “doble plaka (double plate)” law.

“Doble plaka” originated from the requirement for riders in the Philippines to install bigger plates both at the front and back of their motorcycles.

Section 5 of the law reads: “The LTO (Land Transportation Office) shall issue a readable number plate for every motorcycle…The contents of the number plates shall be readable from the front, the back, and the side of the motorcycle from a distance of at least fifteen (15) meters from the motorcycle.”

This does not sit well with many motorcycle riders, who feel that they are being unjustly lumped together with criminals. Among these riders is Jonjon Guarin, who is on a mission with his motorbike.

He heads the 100-man-strong Team Riders Philippines, a rider group with multiple partnerships with government agencies and non-governmental organizations that respond to disasters. When Typhoon Lawin ravaged Luzon in 2016, their riders descended as first responders.

They have been trained for basic life support and threat assessment to save people and relay information efficiently to authorities.

And they don’t just help out during storms. Team Riders Philippines also responds to road accidents. When a car crashes and a Team Rider happens to be in the area, the rider immediately alerts the government and nearby hospitals to respond.

“We’re safety-oriented, and we really are focused on emergency response, not only riders but for the community and the whole country,” Guarin said in a mix of English and Filipino.

Guarin and his fellow riders are advocates of safety and security, which was why when the Motorcycle Crime Prevention Act was signed, they were fuming.

To them, the requirements pose danger to the safety of motorcycle riders because most motorcycles in the country have not been assembled to allow two big plates to be attached to them.

Motorcycles still don’t have front brackets for plates, even small ones, to be mounted on. Because the government won’t pay for motorcycles to get them, and auto shops still could not install them, Guarin is afraid that his fellow-riders will be forced to improvise and increase the risk of having plates fall mid-ride.

“If you reinvent the wheel, two things will happen, it will work or it will fail. What they’re doing is reinventing the wheel, they’re creating a size that is never heard of anywhere in the world,” said Jobert Bolaños, the head of the 100,000-rider Motorcycle Rights Organization (MRO). By using a 200 mm x 225 mm dimension, the Philippine government will be issuing the biggest motorcycle plates in the world. Using this size, Guarin and Bolaños said, would be dangerous not only to motorcycle riders, but even to anyone close to them or on the road.

“Motorcycles have been designed to slice through wind resistance, the bigger plates at the front could fly off if [they turn loose] and impale [those close by],” Bolaños said.

Guarin added: “‘Di ba sa bagyo, yero nakapatong sa bubong, hinahanginan natatanggal pa (During storms, iron roofings fly off because of the wind). How much more a moving vehicle, where it’s just screwed. The tendency is for it to crack and eventually [become loose].”

And if they fail to install the plates immediately, motorcycle riders will be heavily punished.

Section 7 of the law reads: “The driver of a motorcycle without a number plate or readable number plate, as provided in this Act, shall be punished by prision correccional…or a fine of not less than fifty thousand pesos (P50,000) but not more than one hundred thousand pesos (P100,000), or both.”

If drivers of other vehicles, meanwhile, fail to attach their plates, the are fined 10 times less and pay a penalty of only P5,000.

This is unfair, Bolaños said, because most motorcycle riders work jobs with minimum or below minimum wages, while those who could afford to own cars could handle the penalties. Policemen find themselves on the other side of the road against riders.

Sta Maria works for the Highway Patrol Group of the Metro Manila Eastern Police District. He inspects cars that seek clearance, and more often since the start of election season, he has been manning checkpoints for vehicles.

The most flagged vehicles are motorcycles, he said, because they are the ones that usually violate traffic laws and fail to attach plates even at the back. And because motorcycles still have not used double plates, cops are able to see that they don’t have plates at the back only after they have gone past them.

(For me, as an operative, when we’re on the road, it’s quite difficult because you can’t immediately see the plate of the motor. You can’t stop them once they’ve passed. It should be that, even from afar, you can already see.)

With two bigger plates, too, cops believe they could easily track down criminals who use motorcycles.

His statement is based on experience. In a span of 5 weeks, two shootings occurred along EDSA, and both are believed to have been perpetrated by killers on motorbikes.

Because they’re easy to purchase and discard, motorcycles are the preferred ambush and escape vehicle of criminals, regardless of their target – be they local officials, businessmen, human rights advocates, lawyers, or drug suspects.

Based on police data obtained by Rappler, from the time President Rodrigo Duterte assumed office on July 1 up to March 11, 2019, there have already been 5,478 killings perpetrated by motorcycle riders. They have been categorized into 5,091 murder and 387 homicide cases.

This means that on average, 5 people are killed every day by suspects who use motorcycles to approach then escape.

Most of the killings perpetrated by motorbike-riding suspects occurred in capital Metro Manila, which saw 875 or 15.97% of all the killings by riding suspects. It’s followed by its neighboring regions Calabarzon, with 738 killings, and Central Luzon with 659 killings.

Taking the 4th spot with the highest number of killings is Central Visayas, with 546 deaths, followed by the President’s home region Davao with 412.

Solving these killings has been difficult because motorcycles used to commit them have no plates, and if they do have plates, witnesses could not remember them and CCTV cameras could not capture them with telling detail.

PNP chief General Oscar Albayalde, a known rider himself, backed the law, saying: “I don’t think that is discrimination. This is part of security, security of the whole Philippines, not only to anybody, but for all. The government saw that we can avoid the riding-in-tandem incidents with this.” Despite the police’s argument and call for understanding, riders still don’t see themselves abandoning their cause.

Guarin said that cops have already implemented a project that is already doing what the law seeks to accomplish: Oplan Clean Rider.

The project involves cops placing stickers on riders registered with police stations. Those who get stickers get flagged less frequently and serve as cops’ informants about the rider community.

“Basically, we are also helping the authorities to find riders who are criminals,” Guarin said.

Bolaños said they would not have had objections if government only required decals for the front of their motorbikes. This could be done in the crafting of the law’s implementing rules and regulations (IRR), a task delegated to the Land Transportation Office (LTO).

But the LTO could only do so much in crafting the IRR. The fines would still be too heavy for riders.

This is why motorcycle riders, Bolaños said, plan to take the law to court to ask that it be declared unconstitutional.

“They are not trying to solve a problem. They are covering up their shortcomings, they can’t get rid of criminals. They can’t solve the problem of criminality. They are putting the burden on innocent people. That’s not solving a problem,” Bolaños declared. – Rappler.com