PDP-Laban and its confusing local politics in 2019 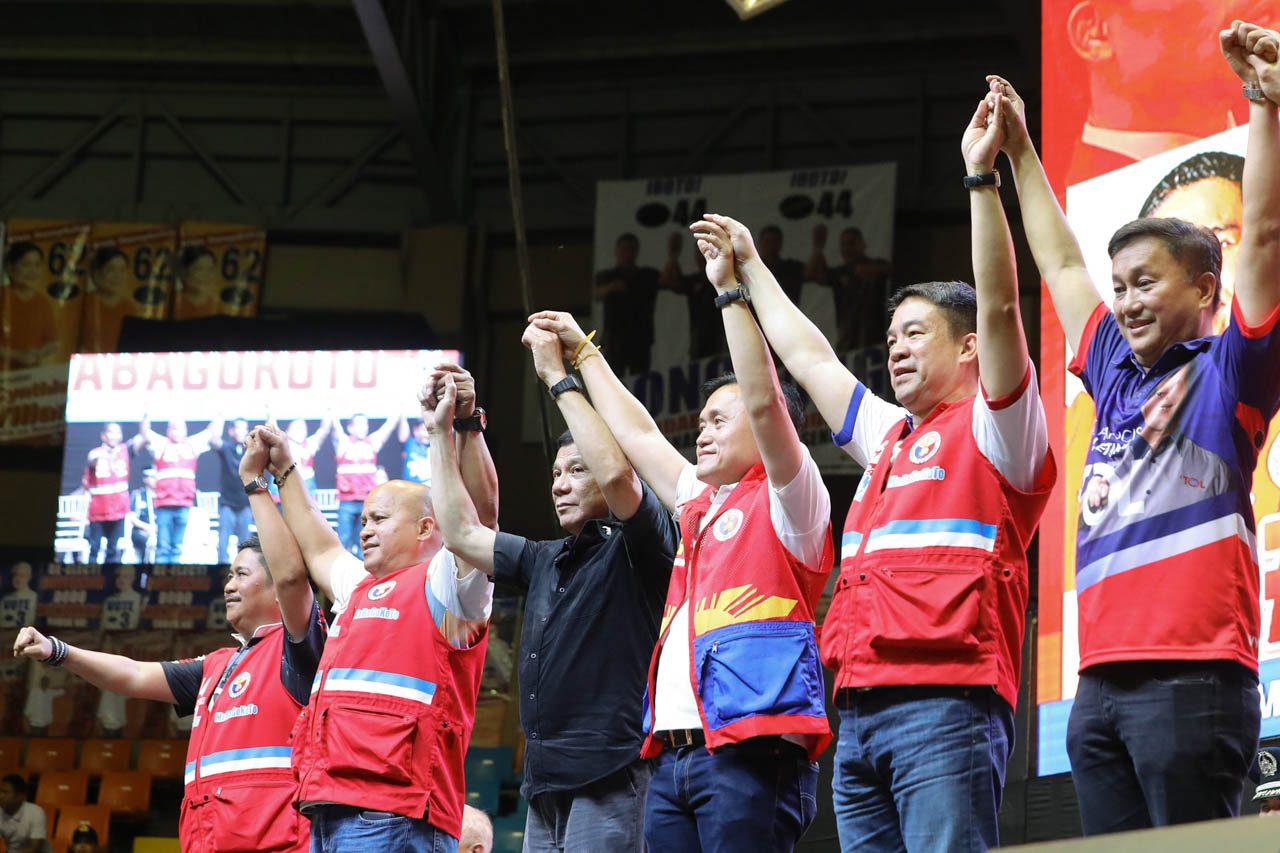 MANILA, Philippines – Confusion and disagreements among party mates and presidential allies hound the ruling party PDP-Laban in the local contests in the May 2019 elections.

While there appears to be solidarity among the 5 senatorial candidates of President Rodrigo Duterte’s party, the opposite is happening at the local level, with some PDP-Laban members running against another party mate or against another presidential ally.

PDP-Laban also could not escape problems even in areas where there are no party mates running.

These problems could be attributed to 3 things:

The case of Taguig: PDP-Laban vs Cayetanos Duterte’s running mate in the 2016 elections, Alan Peter Cayetano, and his family are seeking to continue their hold on the city of Taguig.

While the Cayetanos are known allies of Duterte, they did not join PDP-Laban. Their Nacionalista Party instead forged an alliance with PDP-Laban, led by then-Senate president Aquilino Pimentel III

Yet this was seemingly disregarded when PDP-Laban decided to field candidates against the Cayetanos – a move that agitated the political dynasty in the city, according to party sources.

Such decisions were made by the political group led by Pimentel, and not by Duterte.

The supposed animosity between the Cayetanos and PDP-Laban could be traced back to 2016, when Pimentel was elected Senate president. At the time, Cayetano openly expressed his desire to lead the chamber.

Fast forward to 2019, the Cayetanos didn’t host a rally for PDP-Laban’s senatorial candidates in the city – a stark contrast to their treatment of Sara Duterte Carpio’s HNP, although the two parties mostly have common bets.

But all these dynamics did not stop President Duterte from including Alan’s sister, Pia Cayetano, in the list of PDP-Laban’s guest candidates – another testament to how local and national politics differ and how Duterte’s politics sometimes contradicts the party.

In an earlier interview with Rappler, political analyst Herman Kraft said that while the President identifies as a PDP-Laban member, “party politics never really factored in the politics of Duterte.” In the biggest city in Metro Manila, two members of PDP-Laban are eyeing to become mayor and vice mayor. It is a battle between the camp of Vicente “Bingbong” Crisologo and Quezon City Vice Mayor Joy Belmonte.

Crisologo joined PDP-Laban in 2016, right after Duterte won the presidency. Meanwhile, Belmonte and his running mate Gian Sotto joined the ruling party in May 2017.

Belmonte and Sotto decided to run under Serbisyong Bayan Party (SBP), which later formed an alliance with HNP.

The development irked the camp of then-Senate majority leader Vicente Sotto III, with some insiders claiming it was the straw that broke the camel’s back. Some sitting senators supposedly did not like that PDP-Laban fielded local candidates against them or their families.

So what happened? PDP-Laban claimed it was a matter of “principle.”

Ronwald Munsayac, part of the political team of PDP-Laban and the head of its public information committee, said the vetting of candidates underwent a process.

“All of our political decisions emanate from the local councils. PDP-Laban has local councils all over the country. So they submit recommendations to the national HQ, which in turn submits them to the political committee. This is composed of the most senior and objective PDP-Laban members,” Munsayac said.

He refused to identify the members of the party committee to avoid backlash from those who were not chosen as official candidates.

“The objective is so we do not fall into the trap of automatically fielding whoever is the incumbent, whoever is strong. That’s not how it works. We look at performance,” he said in a mix of English and Filipino.

The reasoning appears inconsistent with the style of their chairman, who was a longtime mayor and so used to the ways of local politics.

Why did PDP-Laban accept all politicians who are seeking the same post?

Munsayac said they were open to everyone and claimed there were no concrete 2019 plans yet when Crisologo, Belmonte, and Sotto joined PDP-Laban. Then there were instances when President Duterte made matters complicated.

In Zamboanga City, PDP-Laban is fielding outgoing Representative Celso Lobregat for mayor. He is running against reelectionist mayor Beng Climaco Salazar of the Liberal Party.

In fact, PDP-Laban held a rally in the city with Duterte and pitched for Lobregat and other local allies.

But in a separate meeting, Duterte also raised the hand of Climaco.

Both candidates even took to Facebook to publicize Duterte’s endorsement.

In the end, PDP-Laban could only reiterate that Lobregat is their official candidate. After all, they could not castigate their chairman for leading the confusion. No official PDP-Laban candidates are running in Cainta in the province of Rizal. But the ruling party decided to adopt vice mayoralty candidate Gary Estrada, whose slate is running against the group of incumbent mayor Kit Nieto.

Despite this, Nieto attended the PDP-Laban rally with President Duterte in Marikina City. Marikina Mayor Marcelino Teodoro of PDP-Laban organized the event.

A month later, on Saturday, May 4, Estrada and his team organized a mini-rally for PDP-Laban in Cainta. The venue, however, had to be changed at least thrice due to the alleged interference of Nieto’s team.

They eventually found a small space in a barangay along the floodway. Pimentel was the only senatorial candidate who attended the rally. Bong Go sent Comedy Queen Ai Ai delas Alas and his mascot to represent him.

The issue did not stop there. While the mini-rally was ongoing, Nieto’s camp also held a motorcade outside the venue. Interestingly, they were also giving away Go campaign paraphernalia.

Similar scenarios could be found in other cities and provinces, such as in San Juan City, Manila, and Ilocos Sur.

It remains to be seen if these local issues will affect the votes for PDP-Laban’s senatorial slate. President Duterte, after all, has always been political force on his own. – Rappler.com